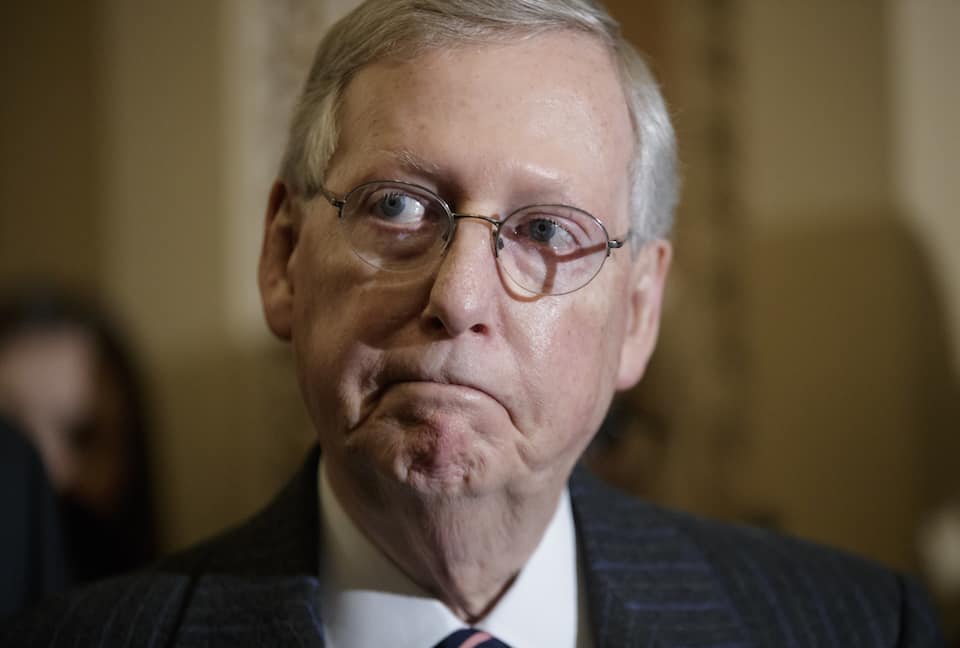 Desperate to ram through Obamacare repeal, the Senate majority leader is putting on a show to give his moderate caucus cover and fool people into thinking it will not be as bad as it is.

The Senate bill to repeal Obamacare is wildly unpopular and has been hemorrhaging support from Republican senators as constituents speak out.

On Thursday, Senate Republicans unveiled a new draft of the bill, which is as terrible as ever. It includes the "Cruz amendment" to let insurers sell barebones plans without guaranteed issue for pre-existing conditions, and some superficial funding in rural states that still results in $2.1 trillion being cut from Medicaid.

McConnell also threw in a provision to give extra funding to Alaska, a clear ploy to buy the vote of holdout Sen. Lisa Murkowski.

This new version has still left some Republican senators opposed, like Susan Collins of Maine and Rand Paul of Kentucky. Others, like Ohio's Rob Portman, are leaning no as well.

One of the largest sticking points of the bill remains the Medicaid cuts. Many Republican senators hail from states where the poor are in the throes of the opioid epidemic, and where rural hospitals depend on Medicaid funding to stay open.

But as the Washington Post's Paige Winfield Cunningham writes in her assessment of the Senate debate, McConnell's strategy for winning over these senators appears to be simply to tell them that the Medicaid cuts he wants them to vote for will not actually happen:

Here's what McConnell has told several hesitant senators (including Portman and Sen. Shelley Moore Capito (R-W.Va.): The bill’s deepest Medicaid cuts are far into the future, and they’ll never go into effect anyway.

"He's trying to sell the pragmatists like Portman, like Capito on 'the CPI-U will never happen,'" a GOP lobbyist and former Hill staffer told me.

Under the current version of the Senate health-care bill, federal Medicaid spending would drop by 26 percent starting in 2026, pegged to the Urban Consumer Price Index. That's still eight-and-a-half years away — long past senators' next election. And cutting Medicaid is so unpopular, with so much resistance from the health-care industry, that it's likely Congress would find a way to avoid the cuts when the time comes. After all, that's what Congress did for years by enacting the so-called "Doc Fix" to a Medicare doctors' payment formula.

In other words, McConnell is telling reluctant senators not to worry about the massive Medicaid cuts because they can just get rid of them later.

This promise is indicative of how Republicans have boxed themselves in on Medicaid. From the outset, McConnell wanted to pass the health care bill as a budget bill, to block Democrats from filibustering and deny them any say in the negotiations.

But under Senate rules, budget reconciliation bills cannot increase the deficit, and Republicans refuse to raise taxes. In fact, they were hoping to cut taxes for the rich in this same bill. That meant the only way they could balance the bill was by throwing millions of people off Medicaid.

Now, McConnell is trying to patch up the discontent over those Medicaid cuts by pretending they are not real or that he can muster the votes at some later date to reverse them.

This kind of legislative politicking is wildly irresponsible. There is no reason to trust McConnell that he will keep his word and "eventually" restore Medicaid. Even if he does, he has still thrown millions of low-income families into insurance purgatory simply because he wanted to twist procedural Senate rules and shut Democrats out of the process.

Republicans cannot keep treating people's lives like a game. The American people have not fallen for this act, and neither should any responsible senator, regardless of party.