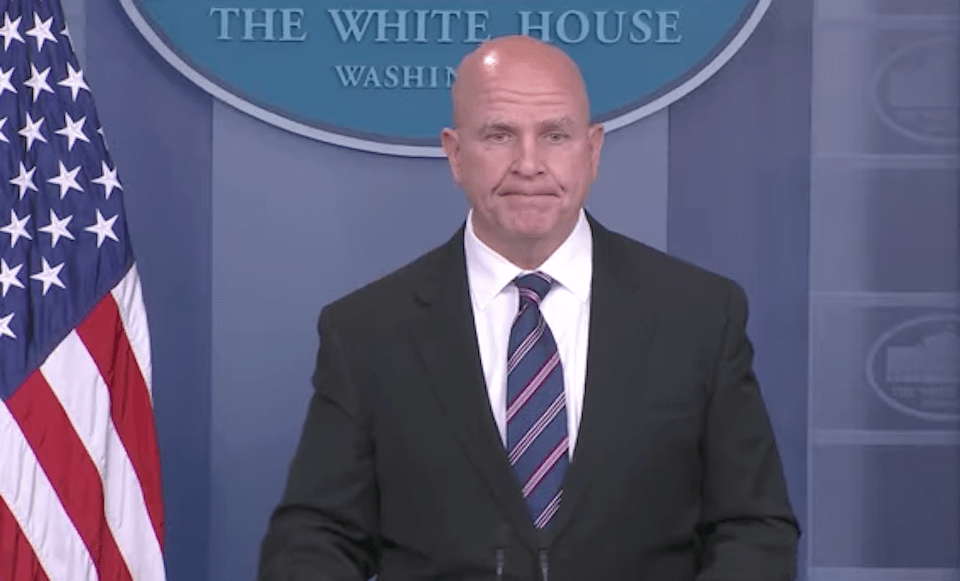 National Security Adviser H.R. McMaster followed up his humiliation at the hands of Donald Trump's Twitter feed by briefing reporters at the White House.

He suffered another blow when Trump contradicted that denial during an early morning Twitter rant Tuesday.

It was against that unfortunate backdrop that McMaster briefed reporters at the White House Tuesday afternoon. The briefing was supposed to be about Trump's upcoming foreign trip, but it of course focused instead on Trump's latest disastrous scandal.

McMaster began by telling Fox News Radio's Jon Decker, "I stand by that statement I made yesterday." However, that seemed to unravel quickly.

Julie Pace, of the Associated Press, cut right to the heart of the matter, asking whether Trump did indeed share classified information from an intelligence partner nation. McMaster refused to deny it, and the language of his refusal was telling:

PACE: Trying to get to some details of this reporting on the president’s conversations with the Russians. Are you denying that he revealed information that was given to the U.S. by an intelligence partner?

MCMASTER: So, what we don’t do is discuss what is and what wasn’t classified. What I will tell you is, in the context of that discussion, what the president discussed with the foreign minister was wholly appropriate to that conversation, and is consistent with the routine sharing of information between the president and any leaders with whom he’s engaged.

PACE: But was it information that the U.S. received from an intelligence partner?

MCMASTER: I’m not going to be the one to confirm that, because that’s the sort of information that could — it could jeopardize our security.

McMaster ended up defending Trump's decision, saying Trump shared "whatever information he thinks is necessary to advance the security of the American people." He also revealed that Trump didn't consult anyone before sharing the information, telling reporters that Trump "made the decision in the context of the conversation," and later added that Trump "wasn't briefed on this before saying it"

However, sharing that classified information with Russia — information Trump did not have permission from the unidentified ally to share — may have endangered national security and has already alienated some of our European allies, who have expressed grave concern about Trump's action.

Burkhard Lischka, a member of the German parliament’s intelligence oversight committee, said that if Trump “passes this information to other governments at will, then Trump becomes a security risk for the entire western world.”

McMasters' decision to cover for Trump is deeply disturbing, but sadly, it is entirely in keeping with Trump's entire administration.