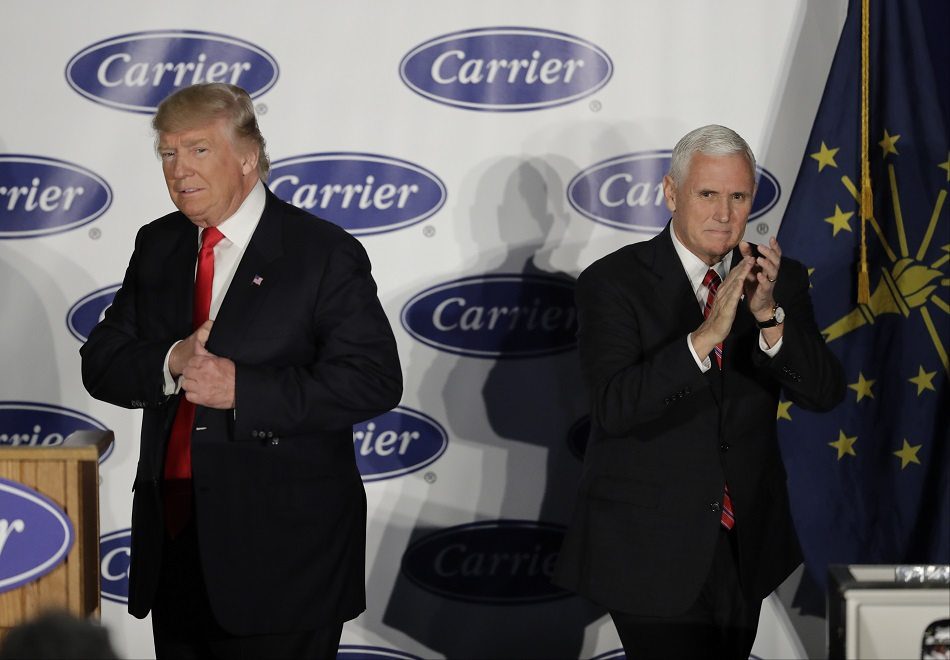 At least one media outlet has utterly failed one of the first major tests of the Trump era, promoting President-elect Donald Trump's Carrier deal with a poll that purports to show overwhelming support for the deal by embedding lies and crucial omissions in the question.

A headline at Politico reads "Poll: Trump's Carrier deal is wildly popular," and, while only seven words long, that headline contains multiple serious errors of omission and inaccuracy — the most egregious of which is the implication that the poll has anything to do with the actual Carrier deal. The question asked of respondents was both factually inaccurate and incomplete:

As a matter of fact, only 800 of the jobs at the Indianapolis plant were ever slated to go to Mexico, not "roughly 1,000." The other 300 or so jobs being included in the count were jobs that were to remain in Indianapolis either way.

And the Politico/Morning Consult poll commits an even more glaring lie of omission by failing to point out that Carrier is still shipping 1,300 jobs across the border, which will result in the closure of an entire plant in Huntington, Indiana.

Part of the blame for this result could reasonably be placed on some members of the corporate political media, which have largely continued to mislead about the deal. But in this case, most of the blame rests with the pollster. According to the poll, only 24 percent of respondents had heard "a lot" about the Carrier deal, leaving 76 percent of them to rely, in part or in whole, on the inaccurate and insufficient description provided.

The Politico poll also deepens the confusion around the Carrier deal by asking other questions that have little or no relationship to what actually happened.

The poll found widespread support for "raising taxes on businesses in the United States that move manufacturing jobs to other countries," a promise that Trump is breaking even as he continues to make it.

The poll also found 71 percent support for "cutting taxes for businesses in the United States that move manufacturing jobs in other countries back to the United States," which Carrier is not doing. Further, 62 percent of respondents said it is "acceptable" to "offer tax breaks or incentives to individual companies to keep jobs in the U.S. A.," something Trump promised he would never do, and yet did do with Carrier.

Finally, the poll never even bothers to ask respondents what they think of the Carrier deal. It only asks if (the poll's version of) the deal makes respondents view President-elect Donald Trump more or less favorably. The 60 percent who responded "more favorable" are supposed to fit the "wildly popular" label, even though the question does not fairly represent the facts of the deal, and does not actually measure overall favorability.

This is part of a familiar set of tactics for media-watchers. When they wanted to manufacture opposition to Obamacare, media quoted polls showing less than 50 percent approval of the law, while never mentioning that consistent and overwhelming majorities either approved of the law, or wanted it to be more liberal.

And during the 2016 election, much of the media relentlessly pushed the idea that Hillary Clinton could not be trusted, based largely on a poll that presented a misleading and incomplete data point as its screaming headline. A deeper look at the data from that poll showed that only 35 percent of the respondents offered negative descriptions of Clinton.

Polls are the hammer and nails with which narratives are constructed, and so Politico's poll bodes poorly for the truth in the coming Trump era. It is imperative that we hold them, and everyone else who engages in this sort of dishonesty, fully accountable every single time.