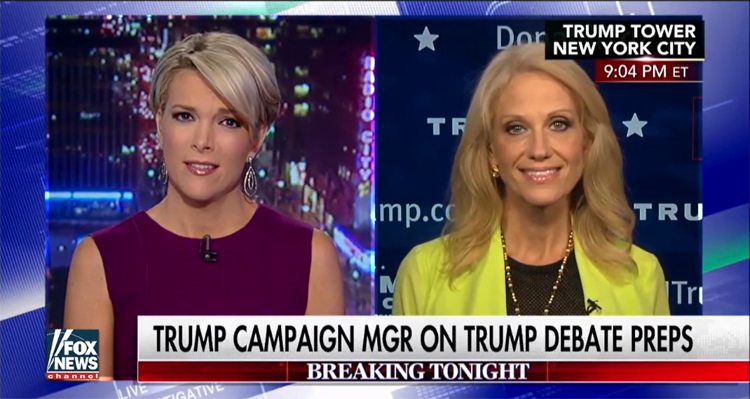 There are a number of amazing things about this Fox News interview in which Megyn Kelly confronts Trump's campaign manager Kellyanne Conway about her candidate's history of sexism, starting with the fact that we're watching two women debate the sexism of a man who hasn't been meaningfully held to account by a press that's predominantly male. I hope we all appreciate the irony of treating accountability for gender bias as "women's work."

Following Donald Trump's disastrous debate performance, during which Hillary Clinton confronted him with his body-shaming comments about Alicia Machado, Kellyanne Conway tried to defend her candidate and minimize his history of sexism. Megyn Kelly was having none of it.

First, Conway complained that Trump hadn't been given enough credit for being "gracious" by not bringing up Clinton's marital history, even though he was crowing about not bringing it up immediately after the debate, thus bringing it up in a cowardly way to which she couldn't directly respond.

Conway then pivoted to complaining about Clinton running negative ads against Trump and being "not nice" to him. Kelly was incredulous: "Kellyanne. Come on. It's not nice? They are running for president." And her astonishment was only magnified when Conway asserted that Clinton's ads were untrue. Kelly fact-checked her: "The ads that she's running about him when it comes to his comments on women use his words, Kellyanne."

As the interview continued, Kelly wound back to Conway's assertion that Trump had only made a couple of small comments about women here and there over 25 years. Refusing to let her get away with that nonsense, she said, "You know that's not true. You know, you know, he has repeatedly made comments about women, about their looks, about their size, their weight."

It was a painfully honest moment, and a necessary one.

Kelly asked Conway if this was a problem for Trump, to which Conway could only respond: "Megyn, but is that the campaign issue that Hillary Clinton is running on? The answer seems to be yes! Do we not deserve as voters for this woman to tell us whether she thinks Obamacare is a disaster or not?"

For the record, Clinton has weighed in with her feelings about Obamacare. Once or twice or three dozen times or so.

It is remarkable that Conway thinks any Democratic presidential candidate — no less the first female nominee of a major party — running on the issue of women's equality is somehow objectionable or unreasonable or unserious. Women are half the population. Why not run on the issue that respect for women as equal human beings is important?

And in her very comment, Conway makes plain the continued need for women's advocacy, as she refers to Clinton as "this woman," engaging a particular rhetorical device that effectively turns the word "woman" into a sexist slur. "This woman" is used in our discourse in a way "this man" rarely is. That is, as a substitute for a word embedded with commentary about the person being discussed.

It's used in a place where, when one is talking about a man, the inserted word is something like "this jerk" or "this liar" or "this scumbag" or epithets which can't be published in this space. But when it's a woman — and an actual sexist slur can't be used — the word "woman" itself simply suffices. This woman and all the stereotypes it invokes.

Later in the interview, winding back to accusing Clinton of exploiting sexism, Conway says: "I see the turf on which Hillary Clinton would like to fight this race, but I'm telling you that, according to the Fox News poll and everybody else's polling, Megyn, women and men in this country want to hear more about policies. They want to hear more about the future, not the past."

Of course, Trump needs to do better in lots of ways — starting with not routinely talking about women like we are things.

But given that Trump imagines coming after Clinton's family history will win him the second debate, it doesn't seem like he's learning anything, nor intending to do better. To the absolute contrary, it appears as though he is intent on nothing but circling the drain.

America's women and girls deserve better than this. Better from the Republican presidential candidate, and better from the media, who have let a Fox News anchor become their conscience on justice for women.