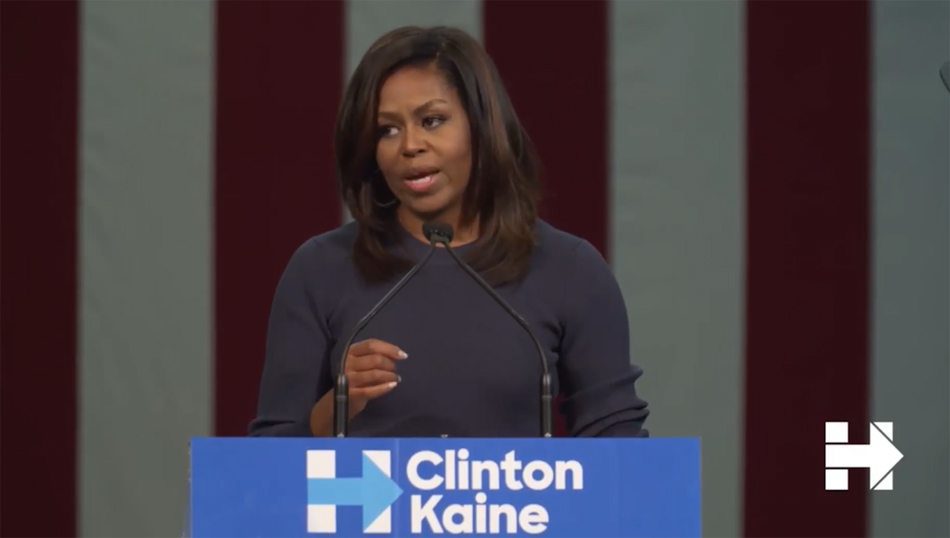 In New Hampshire on the campaign trail, First Lady Michelle Obama was passionate in her criticism of the terrible example Donald Trump is setting — and equally passionate about the positive example Hillary Clinton is setting. We have a clear choice to make, she argued, and "it's time to say enough is enough" to Trump.

Speaking for the first time after 11 women came forward in a single day to report having been sexually assaulted by Donald Trump, Michelle Obama was emotional as she recounted what it is like for her as a woman to hear "how he has treated women his whole life."

"And I have to tell you that I listen to all of this," she said, "and I feel it so personally. And I'm sure that many of you do, too, particularly the women. The shameful comments about our bodies. The disrespect of our ambitions and intellect. The belief that you can do anything you want to a woman. It is cruel. It's frightening. And the truth is, it hurts."

So many have worked for so many years to end this kind of violence and abuse and disrespect, but here we are. Two thousand and sixteen. And we're hearing these exact same things every day on the campaign trail. We are drowning in it.

And all of us are doing what women have always done: We're trying to keep our heads above water. Just trying to get through it. Trying to pretend like this doesn't really bother us. Maybe because we think that admitting how much it hurts makes us as women look weak. Maybe we're afraid to be that vulnerable. Maybe we've grown accustomed to swallowing these emotions and staying quiet, because we've seen that people often won't take our word over his. Or maybe we don't want to believe that there are still people out there who think so little of us as women.

Too many are treating this as just another day's headline; as if our outrage is overblown or unwarranted; as if this is normal, just politics as usual. But New Hampshire, be clear: This is not normal. This is not politics as usual. This is disgraceful. It is intolerable. And it doesn't matter what party you belong to — Democrat, Republican, Independent — no woman deserves to be treated this way; none of us deserves this kind of abuse.

And I know it's a campaign, but this isn't about politics. It's about basic human decency. It's about right and wrong. And we simply cannot endure this, or expose our children to this any longer, not for another minute and let alone for four years. Now is the time for all of us to stand up and say: Enough is enough. This has got to stop right now.

Obama went on to talk about the potential impact on girls, having to listen to these things about a presidential candidate — and how it affects men and boys, too.

She then observed that there is a good role model in this race. And that our support for her is imperative if we want to model the values most parents teach their kids — embracing that we are stronger together and rejecting bigotry and bullying.

"We know that Hillary is the right person for the job," she said, "because we've seen her character and commitment not just in this campaign, but over the course of her entire life. The fact is that Hillary embodies so many of the values that we try so hard to teach our young people."

It was another remarkably moving and powerful speech from the First Lady, who has emerged as Clinton's most effective ally in this campaign, in no small part because she is channeling so many of the things the first female major-party nominee surely wants to say, but can't.