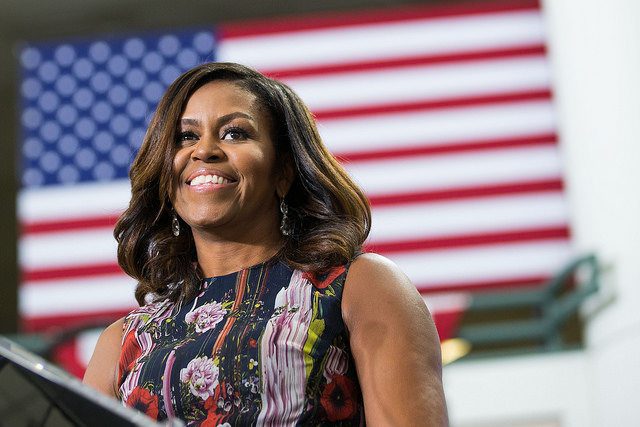 Stumping in Philadelphia for Hillary Clinton, First Lady Michelle Obama demonstrated once again that she is one of Hillary Clinton's most effective advocates — and her star ally.

As I wrote following Michelle Obama's memorable speech at the DNC convention, she has been a shining star since we met as classmates at Harvard Law School.

“Tall, lanky, with a quick, dry wit, a sharp intellect, and a warm demeanor. No pretense, but broad priorities that always extended beyond herself, no matter what she was going through.”

The First Lady was a standout among the slate of excellent speakers at the Democratic Convention, inspiring the nation by sharing the lessons she has taught her young daughters: “When they go low, we go high.”

Hitting the campaign trail again for Clinton in Philadelphia, Michelle Obama once again gave Americans a roadmap for avoiding that low road and putting this election in its proper perspective and significance.

“Let me take a moment,” she braced students at La Salle University, before she launched into a detailed criticism of Donald Trump, including his role in the birther movement, his mainstreaming of misogyny, and his erratic temperament and dearth of qualifications.

The presidency, she explained, "doesn’t change who you are, it reveals who you are."

If a candidate is erratic and threatening; if a candidate traffics in prejudice, fear and lies on the campaign trail; if a candidate thinks that not paying taxes makes you smart or that it’s good business when people lose their homes; if a candidate regularly and flippantly makes cruel and insulting comments about women, about how we look, how we act; well, sadly, that’s who that candidate really is. That is the kind of president they will be. And trust me, a candidate is not going to suddenly change once they’re in office. Just the opposite…at that point, it’s too late. They are the leader of the world’s largest economy, commander-in-chief of the most powerful military force on earth. With every word they utter, they can start wars, crash markets, fundamentally change the course of this planet. So who in this election is truly ready for that job?

The First Lady also crystallized what is at stake if Americans, particularly the young Americans in her audience, either stay at home on election day or engage in the folly of a protest vote because they can’t find a “perfect” candidate: “Remember it’s not about voting for the perfect candidate. There is no such person.”

There is, however, a person who meets the qualifications for the job, as she detailed from her perspective having seen it close-up for eight years.

To that end, the First Lady has also lent her talents to Hillary Clinton's latest campaign ad, urging voters to join her in supporting Clinton, because she will be a president that kids look up to.

This is classic Michelle Obama.

And she does it all with humor and grace, including this very funny reference to sprucing up the people’s house to make sure she gets her security deposit back.

(Melissa McEwan contributed to this article)