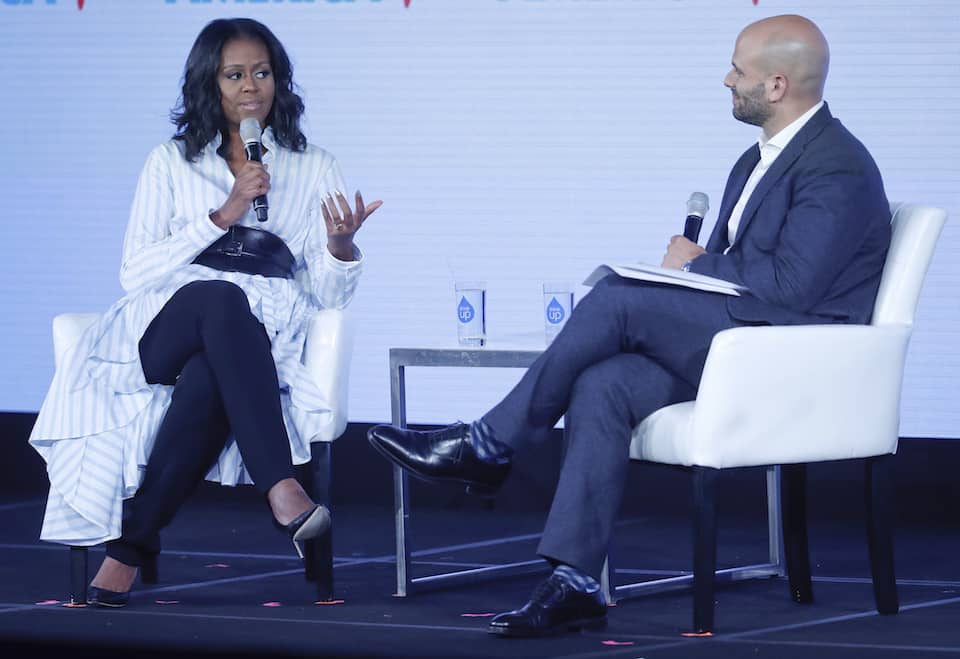 Former first lady Michelle Obama struck out at Trump administration's attempts to undo a program to make school lunches healthier for children, asking an audience to think about why someone would want children to eat "crap."

Former first lady Michelle Obama forcefully pushed back on the Trump administration's plans to roll back initiatives designed to improve the health of school lunches across America.

Agriculture Secretary Sonny Purdue is delaying an upcoming requirement that would have forced schools to lower the sodium in their meals, while also continuing to issue waivers that hold off regulations requiring grains served at school to be 50 percent whole grain.

Speaking to the Building A Healthier Future Summit, Obama blasted the mindset that would support making food for children less healthy. "Think about why someone is OK with your kids eating crap," she told the audience to a chorus of applause.

Michell Obama the REAL #FLOTUS slams Republicans. "Why don't you want our kids to have good food at ascool? What is wrong with you?" pic.twitter.com/qxiynPJuXf

OBAMA: We've got to make sure we don't let anybody take us back. Because the question is: Where are we going back to? You know, what is it that people – yeah this is where you really have to look at motives. I mean, you have to stop and think: Why don't you want our kids to have good food at school? What is wrong with you? And why is that a partisan issue? Why would that be political? What is going on?

You know, now that's up to moms. Moms, think about this. I don't care what state you live in, take me out of the equation. Like me, don't like me. But think about why someone is okay with your kids eating crap. Why do you – why would you celebrate that? Why would you sit idly and be okay with that?

The rollback of attempts to make food healthier fits right into Trump's recent pattern. While his administration is extremely unpopular, President Obama left the White House with widespread popular support, and Michelle Obama was even more popular than her husband.

Trump has vindictively tried to undermine the Obama legacy since taking office. He has been trying to uproot the Affordable Care Act (Obamacare). He has smeared key figures from the Obama administration like Hillary Clinton and Susan Rice. And he recently fired the first Black female White House usher, Angella Reid, whom Obama had hired.

Trump even ended a program designed to educate girls around the world started by the former first lady.

Children's meals, and an attempt to make them healthier, should have across the board support. Donald Trump is apparently too angry at his predecessor, and at Michelle Obama, to let it pass. But she's likely to have the last laugh.