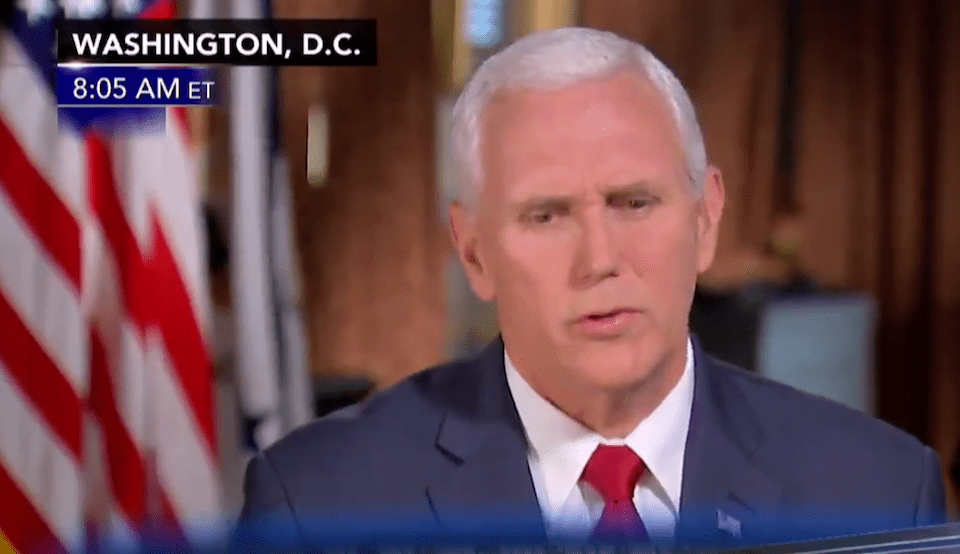 As the entire world reacts in horror to Donald Trump's decision to withdraw the Unites States from the Paris climate agreement, the White House spin on the decision is more pathetic partisan attacks.

The entire world, from European allies to corporations like Exxon, is utterly horrified at Donald Trump's decision to withdraw the United States from the Paris climate agreement.

It should not be difficult to understand why. Climate change is a crisis that nearly every country on the planet agreed to address together. But inside Trump world, concerns about our planet's future are a total mystery.

On Fox News, Vice President Mike Pence dutifully defended the administration's decision by questioning why anyone would care about the climate crisis:

.@VP: "For some reason, this issue of climate change has emerged as a paramount issue for the left - in this country and around the world." pic.twitter.com/1UgRsgVkj1

PENCE: We've demonstrated real leadership. We've demonstrated real progress, but for some reason or another, this issue of climate change has emerged as a paramount issue for the left in this country and around the world. And through Kyoto and through President Obama's cap-and-trade agenda and then through the — in the last year of his administration, to have America saddled in an international agreement in the Paris accord, I think, I think put a real burden on our economy and our people and is a bad deal for America. And as the president said so memorably yesterday, he was elected to represent Pittsburgh, not Paris. And I just have to tell you, it is so refreshing to have a president who just stands without apology for the American people, for the American economy, and for America's interests in the world first.

Also memorable from Thursday's announcement was the immediate rebuke from Pittsburgh Mayor Bill Peduto on that very point:

Fact: Hillary Clinton received 80% of the vote in Pittsburgh. Pittsburgh stands with the world & will follow Paris Agreement @HillaryClinton https://t.co/cibJyT7MAK

If the Trump administration truly does not understand the universal condemnation of this decision, or the concern over the climate change crisis, it could consult any number of scientists who have for years been sounding the alarms.

But given that Trump has refused to listen to scientists and declared global warming a "hoax" by the Chinese, that seems unlikely to happen. So the administration may remain in the dark about why, "for some reason," the rest of the world — not only "the left" — is outraged just because the future of every living being on the planet is in danger.