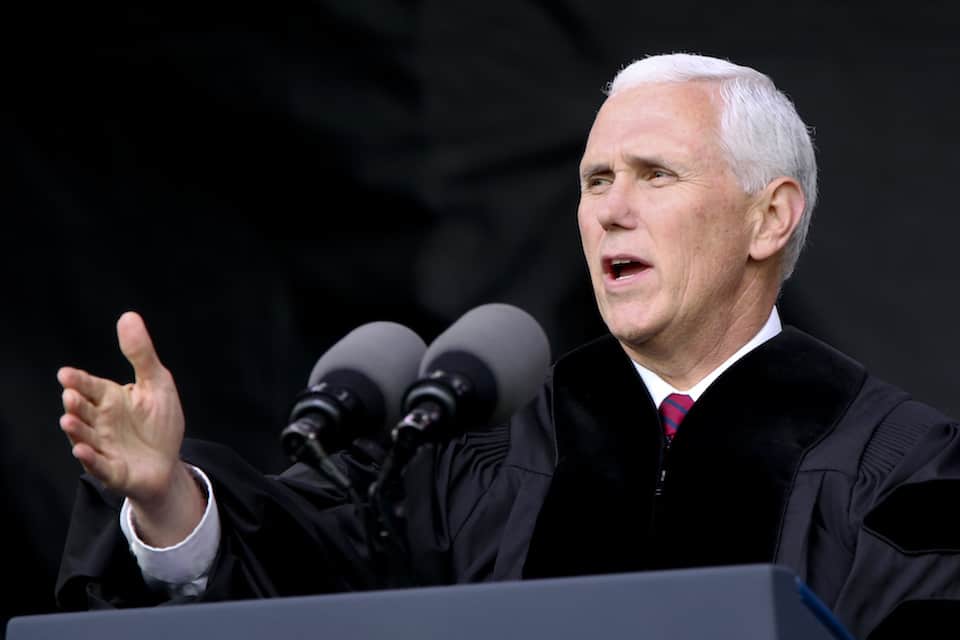 Mike Pence may think he can cover for Donald Trump. But the American people see through them both. Neither are examples or role models.

Vice President Mike Pence used his commencement speech at a small Christian college in western Pennsylvania Saturday to hold up Donald Trump as an example to students.

"Aspire to be men and women of character," Pence told Grove City College graduates. "Servant leadership must be the animating force."

Earlier this week, Trump displayed a stunning lack of leadership when he complained to Coast Guard graduates that he had been treated very "unfairly," claiming, "No politician in history ... has been treated worse."

But Pence stayed right in line, warning of the "opposition" that comes with leadership: "Anyone who dares to step forward will find those who'd rather they stay put."

The peak of his soliloquy on what it takes to lead came with recommending his boss as role model:

You know, you need to look no further than a friend of mine as an example of leadership and perseverance, the 45th President of the United States of America. President Donald Trump.

During the 2016 campaign, Christian pastor Max Lucado, dubbed “America’s Best Preacher” by Reader’s Digest, explained why Trump was an unacceptable choice for president:

He ridiculed a war hero. He made mockery of a reporter’s menstrual cycle. He made fun of a disabled reporter. He referred to the former first lady, Barbara Bush as “mommy,” and belittled Jeb Bush for bringing her on the campaign trail. He routinely calls people “stupid,” “loser,” and “dummy.” These were not off-line, backstage, overheard, not-to-be-repeated comments. They were publicly and intentionally tweeted, recorded, and presented.

As we all know too well, it only got worse from there.

As president, his misogynist behavior and policies are hurting more women than ever. His discriminatory policies are ripping families apart. His corrupt "leadership" has made us less safe and less secure.

As a result, the American public views him not as a role model or an example, but as "ignorant," "incompetent," and a "liar."

Yet as much attention as Trump's lack of popularity has received, it's important to remember that Pence fares no better. In fact, a recent poll showed Americans like Pence even less than they like Trump.

So Pence's praise will mean little. Especially as Pence's role as Trump's co-conspirator in the scandals surrounding the presidency continue to come to light.