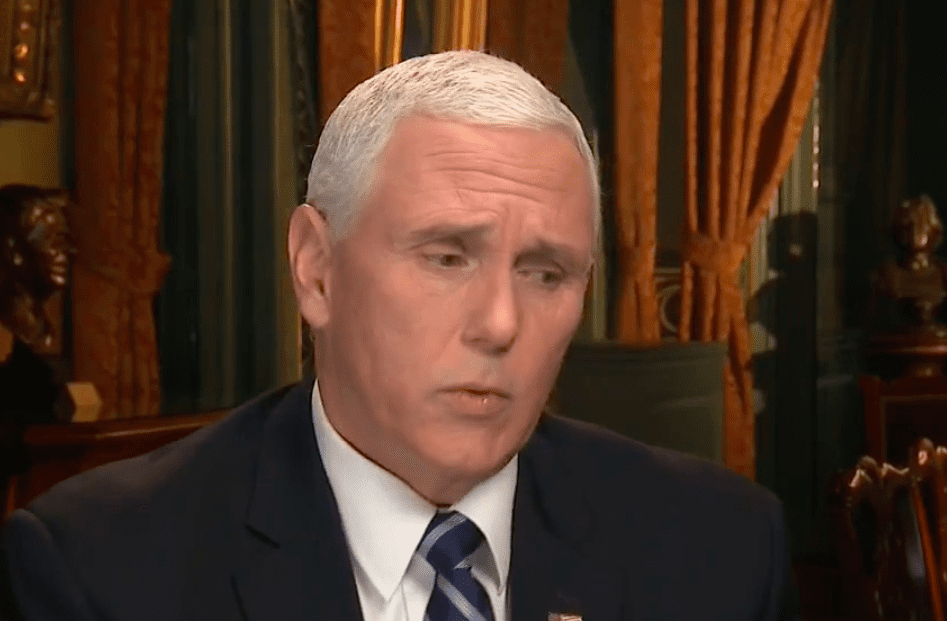 Trump is a liar — but so is Mike Pence.

Mike Pence made a fool of himself by trying to cover for Trump's blatant lie about former presidents urging him to build a useless border wall.

Pence appeared on the Today Show as part of the administration's attempt to turn back the tide of public opinion, which is overwhelmingly opposed to Trump's shutdown of the federal government. Trump has pushed the shutdown to retaliate against Democrats in Congress for refusing to waste billions of tax dollars on his racist border wall idea.

NBC's Hallie Jackson asked Pence to explain Trump's latest whopper about the wall: That former presidents had not only urged Trump to push for the wall in private conversations, but that they regretted not building such a wall themselves. All four living former presidents have denied that anything like this ever happened.

Searching for a way to explain Trump's fabrication, Pence stammered and responded, "I know the president has said that was his impression from previous administrations."

This, too, was a complete fabrication.

What Trump in fact said, during a public appearance in the Rose Garden, was this: "This [building the wall] should have been done by all of the presidents that preceded me and they all know it. Some of them have told me that we should have done it."

This was no "impression," as Pence claimed. Trump said he was personally advised on the issue by former presidents, all of whom say they never did so.

Certainly, previous presidents have spoken about border security — but that is a far cry from the Trump/Pence claim that they ever endorsed Trump's border wall fantasy.

In fact, Trump's immediate predecessor, President Barack Obama, said that the border wall idea "contradicts the evidence that our growth and our innovation and our dynamism has always been spurred by our ability to attract strivers from every corner of the globe."

In another interview on ABC's Good Morning America, Pence also regurgitated the lie that "4,000 known or suspected terrorists were apprehended attempting to come into the United States through various means in the last year."

That same lie was too much even for Fox when White House press secretary Sarah Huckabee Sanders repeated it in an interview with Fox News Sunday's Chris Wallace, who immediately fact-checked Sanders' false claim on the air.

For one thing, most of the 4,000 apprehensions Pence is referring to were made at airports — not the southern border. And many of the people detained at airports aren't suspected terrorists at all, but merely share a name with one.

There simply aren't 4,000 terrorists coming into the United States every year, and certainly not at the southern border.

In fact, a senior official familiar with data from the Customs and Border Protection service admitted to CNN that only about 12 people on terrorist watch lists — not 4,000 — were stopped at the southern border.

Lies like this show that despite his considerable efforts to distance himself from the muck of the Trump administration, Pence is up to his eyeballs in it. He is Trump's foot soldier, willingly going out in public with the imprimatur of the presidency to lie to millions of Americans.

Trump is a liar, and so is Mike Pence. They work as a team to mislead and defraud the American people.