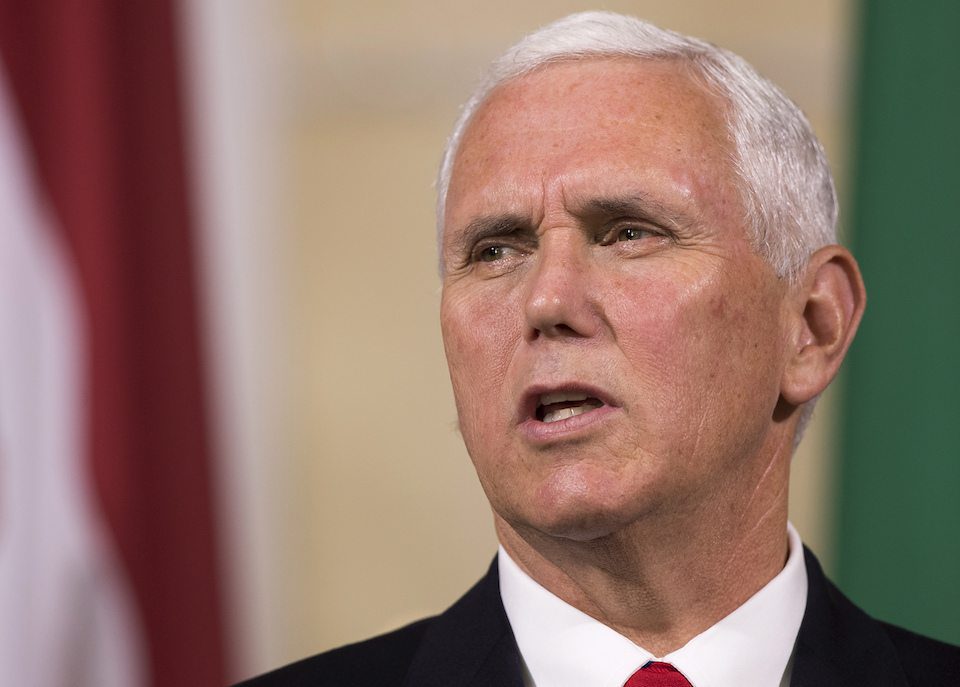 Mike Pence is raising money for a super PAC that happily accepted at least half a million dollars from accused rapist and former RNC finance chair Steve Wynn.

Mike Pence plans to fundraise for a super PAC that proudly takes funding from an accused rapist.

As part of a promotional push for the GOP's 2018 candidates, Pence will host a fundraiser in Milwaukee on behalf of America First Action. Trump recently hosted a fundraising dinner for the same organization.

The group describes itself as "the primary super PAC dedicated to electing federal candidates who support the agenda of the Trump-Pence administration."

Multiple women who worked at his Las Vegas hotels accused Wynn of rape and sexual coercion.

The Associated Press obtained a police report in which a woman said Wynn raped her at least three times around 1973 and 1974. In one instance, the woman said Wynn entered her apartment even though she never gave him a key. He then raped her as he pinned her against a refrigerator.

Other women have accused Wynn of sexually harassing and assaulting them, with one instance including a $7.5 million settlement. The Wall Street Journal noted, "Wynn Resorts employees and others described a CEO who sexualized his workplace and pressured workers to perform sex acts."

After the assault allegations surfaced, Wynn stepped down from the Republican Party's finance committee. But the party has refused to return the money. And America First action also has no plans to do so.

The Washington Post reported that Wynn's donation was "the largest publicly known donation this cycle to the main super PAC supporting President Trump." The PAC said it would use the money to help sustain the Republican Party's congressional majority.

It has already dipped into its Wynn-tainted coffers by spending money to support Rick Saccone, who lost the special election in Pennsylvania's 18th Congressional District to Democrat Conor Lamb.

Previously, the PAC spent over $1 million in support of accused pedophile Roy Moore, the Republican Party's unsuccessful nominee in the race for Alabama's open Senate seat.

In addition to backing Republican candidates, the PAC has also spent over $33,000 at Trump properties, establishing itself in the nexus of groups that have directed money to Trump's private bank account.

America First Action could have returned the money from Wynn in light of the allegations of sexual assault. Instead, it chose to use those funds to back the Republican Party.

Now Mike Pence has effectively given the practice his blessing. And despite his repeated self-positioning as a "family values" figure, he has no problem adding to the stash of tainted funds.