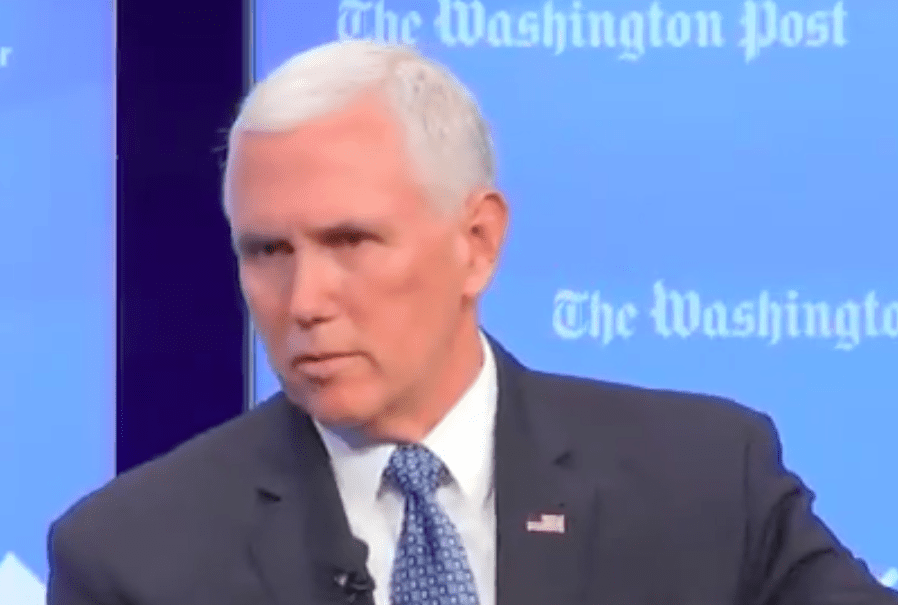 Pence spun a deranged theory that a group of refugees are secret terrorists who are from 'other than Mexico — that means from the Middle East region.'

Mike Pence is amplifying Trump's racist attack on a group of Honduran refugees, who are traveling north in a large group to keep each other safe on their long journey to seek asylum in the United States.

Trump is telling blatant, racist lies about these desperate people. He made the baseless claim that "criminals and unknown Middle Easterners are mixed in" with the migrant group, and called the "caravan" a national security threat.

Even Fox News has admitted that there is "no evidence" to support Trump's claim, which some conservative commentators and anchors on the network have repeated.

And while it doesn't seem possible, Pence actually made Trump's crazy, racist conspiracy theory even crazier and more racist — by insisting that "statistics" prove there must be some Middle Eastern terrorists hiding amid the Honduran refugees, and that it's "inconceivable" for Trump to be wrong about this.

Shockingly, Pence also claimed that the Trump administration routinely describes Middle Easterners as being from somewhere "other than Mexico."

Asked by reporter Robert Costa to provide evidence of Trump's allegation, Pence poured it on thick during a Washington Post event.

"It's inconceivable that there are not people of Middle Eastern descent in a crowd of more than 7,000 people advancing toward our border," Pence said. Then he claimed to have "the statistics on this."

"In the last fiscal year, we apprehended more than 10 terrorists or suspected terrorists per day at our southern border from countries that are referred to in our lexicon as 'other than Mexico' — that means from the Middle East region," Pence said.

Pence questioned "the idea that they would not be in this large throng," and claimed the president of Honduras told him that the caravan "was organized by leftist groups in Honduras, financed by Venezuela, and sent north to challenge our sovereignty and challenge our border."

.@costareports asks @VP Mike Pence about @realDonaldTrump’s claim that unknown Middle Easterners had infiltrated the migrant caravan heading to the U.S. border. “It’s inconceivable that there are not people of Middle Eastern descent,” Pence said. pic.twitter.com/7CRmyggfHG

What Pence said to back up Trump's lie was itself a lie.

Earlier this year, Politifact gave Pence a "Pants on Fire" rating (which it reserves for the most egregious falsehoods) after he made a similar claim.

The fact-checking organization "found no facts" to back up Pence's assertion that seven "known or suspected terrorists" were apprehended along the southern border every day.

But now, the number of non-existent daily terrorist crossings has somehow grown from seven to 10.

Republicans have gone all-in on a racist and xenophobic message in the few days left before the midterm election. It is all they have left.

The ringleader for these lies and hate is Trump — but at his side, and constantly complicit in promoting this hate, is Mike Pence.