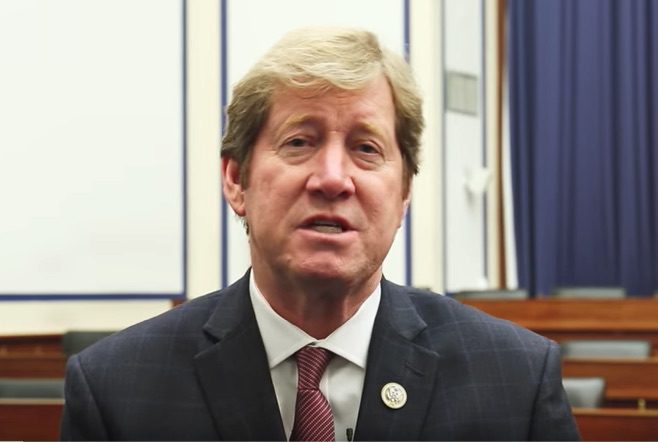 Republican Rep. Jason Lewis wants you to attend his town halls — provided he approves of you.

Freshman Rep. Jason Lewis (R-MN) has not held a single town hall since being elected. Instead, he has opted for "tele-town halls" where moderators decide who can ask questions.

Now, he is finally holding a series of three in-person town halls on Saturday in Lakeville, Wabasha, and Jordan. But he is still picking and choosing who gets to attend. Per his website, and angry responses, these town halls are not open to the public.

Instead, people must fill out an application and provide a photo ID to receive a ticket.

Lewis' justification for filtering attendees this way is unclear. But some constituents are already being rejected due to "limited space":

Here's the email @repjasonlewis apparently sent to thousands of people who politely asked to attend one of his first town hall meetings in #MN02 pic.twitter.com/eJ4Gv1VAks

Lewis is a former right-wing talk radio host who helped Michele Bachmann launch her presidential campaign in 2012. As "America's Mr. Right" on the radio, Lewis called single women "simply ignorant of the important issues in life," and compared both gay marriage and taxing the rich to slavery, even while ironically saying he wasn't sure if the Civil War should have been fought.

He narrowly won this open Twin Cities district in 2016, beating Democratic-Farmer-Labor candidate Angie Craig. His tenure in Congress has been predictable party-line extremism, supporting both health care repeal and the GOP tax scam.

Minnesota's 2nd District has consistently sent Republicans to Congress for over a decade, but Obama carried the district in 2008 and 2012.

Meanwhile, Craig, who was endorsed by the Human Rights Campaign as "a proven champion of equality," is gearing up for a rematch this fall. Analysts rate this contest a toss-up.

And Lewis' plan to control who can and cannot attend his town halls may stem from how frequently Republicans who have held town halls were humiliated by angry voters.

From a constituent reading out loud insulting text messages she got from Rep. Steve Knight (R-CA) at a town hall in Simi Valley, to Rep. Raúl Labrador (R-ID) being shouted down in Lewiston for saying "nobody dies because they don't have access to health care," to Rep. Steve Womack (R-AR) being booed in West Fork for saying social programs let Americans just "stay on the couch" and "eat their potato chips," town halls across the country have not gone well for Republican politicians.

Lewis seemingly wants it both ways — creating the appearance of being accessible to constituents while in fact being anything but. But that attempt to control his audience might backfire in ways he might not have anticipated.