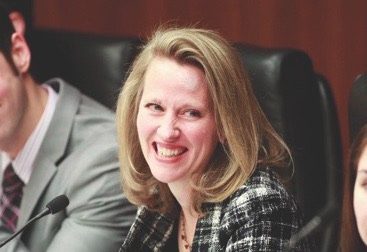 Sarah Anderson campaign
Get The American Independent in your inbox

Minnesota state Rep. Sarah Anderson of House District 44A likes to talk about standing up for families, but her voting record tells a different story.

Minnesota state Rep. Sarah Anderson claims she fights for children and families — yet she used her time in the state legislature to undermine and block legislation to safeguard the rights of working mothers.

In 2014, Anderson pushed for a “delete all” amendment that would have gutted the Women’s Economic Security Act (WESA). The WESA increased protections for pregnant women and nursing mothers, and introduced new measures to guarantee equal pay for women in a state where the average pay for women is almost $10,000 less than for men.

“This is about economic security for working families and lifting women out of poverty,” said Rep. Carly Melin about the bill in 2014.

“While I appreciate what Rep. Melin is doing here today, we need to provide greater opportunities for women, not greater regulations,” Anderson said as she introduced her amendment that would have eliminated every single provision of the bill, leaving legislators with nothing more than a title.

The provisions Anderson tried to get rid of included legal protections for women who discuss their compensation with other employees, and requirements that mothers be given space to pump breast milk regardless of the size of the company they work for.

Anderson's amendment would have given women the "opportunities" to get paid less, and to have their lives made more difficult while breastfeeding.

Fortunately for the women of Minnesota, Anderson’s amendment was defeated. The bill was quickly passed with an overwhelming majority of legislators, including Anderson, voting “yes.”

Just one year later, however, Anderson voted “no” on the Working Parents Act (WPA), which would have expanded paid family leave and introduced “predictability pay” ensuring that employees, including parents, are protected if an employer chances or reduces their hours on short notice.

Unlike the Women’s Economic Security Act, the WPA has still not been passed into law. And passing laws like it may be even harder now thanks to the actions of Sarah Anderson and her fellow Minnesota Republicans in May 2017.

As part of the 2017 state budget, Anderson and the Republicans cut funding for the Office on the Economic Status of Women. At the time, Anderson defended the move as a simple reshuffling, with the formal duties of the office taken over by the Legislative Coordinating Commission.

But the office they eliminated was staffed by just one woman, Barbara Battiste — a powerful voice for women’s issues in Minnesota politics. Her first year on the job saw legislators approve the historic WESA law despite Anderson’s attempt to gut it.

Battiste maintains that her elimination was politically motivated.

With Battiste out of the way, Anderson took new steps in 2018 to undermine WESA's equal pay protections when she authored a spending bill that cut over a million dollars from the state Human Rights Department. Those cuts would hamper the department’s ability to enforce equal pay laws, according to Human Rights Commissioner Kevin Lindsey.

These cuts were possible partly due to Sarah Anderson’s role as chair of Minnesota’s Government Finance Committee. That position gives her enormous power over the state’s budget.

Whether Anderson continues to hold that power will be up to the voters this November, including the Minnesota women she has repeatedly refused to protect.