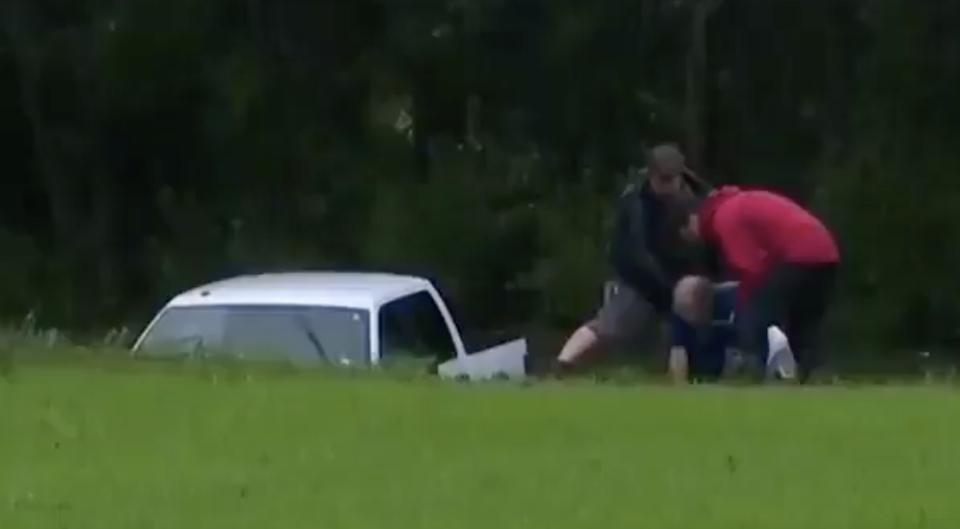 Minutes after Donald Trump issued his latest attack on reporters and the free press, a CNN reporter in Texas saved a man's life live on-air while reporting on Hurricane Harvey.

Donald Trump returned to his hobbyhorse of attacking the media, using his Twitter account to again whine about the press and accuse them of "false reporting." Just 35 minutes after he posted his tweet, a CNN reporter and his crew in Texas pulled a man out of a truck sinking into the floodwaters of Hurricane Harvey.

CNN reporter Drew Griffin was reporting from Beaumont, Texas, when he saw a truck floating in flood waters. Griffin and his crew grabbed rope and ran toward the truck, pulling the man out and saving his life. He had driven the car into a ravine, which looked like a road because of the flooding.

The grateful driver told Griffin, "I want to thank these guys for saving my life."

A CNN reporter and his crew pulled a man out of his sinking truck on live TV ? pic.twitter.com/2M9e0IEftu

The media, as they report on the storm and the flooding, have become a part of the story. Reporters have helped to rescue flood victims, and have also done considerable work to promote charities and organizations helping with relief efforts. They have also showcased the heroism of first responders who are putting their lives in danger to help fellow citizens.

Meanwhile, Trump has been tweeting nonsense, including his petulant complaints about the free press.

Trump's attacks on the media have gotten so bad that the United Nations human rights commissioner has been forced to weigh in.

Zeid Ra’ad al-Hussein pointed out that it is "amazing" that the freedom of the press, which is a "cornerstone" of the Constitution, "is now itself under attack from the President."

The death toll continues to rise in Texas, while Trump breezes in and treats it like a campaign appearance, complete with his typical boast about crowd size. Apparently finished for now with photo ops in Texas, Trump heads to Missouri today to sell his tax plan for the rich.

As he does, reporters remain on the scene in Texas, bringing the world very real news and information and making a major positive impact.

Trump could learn a thing or two from them, if he would stop smearing and attacking them for two seconds.