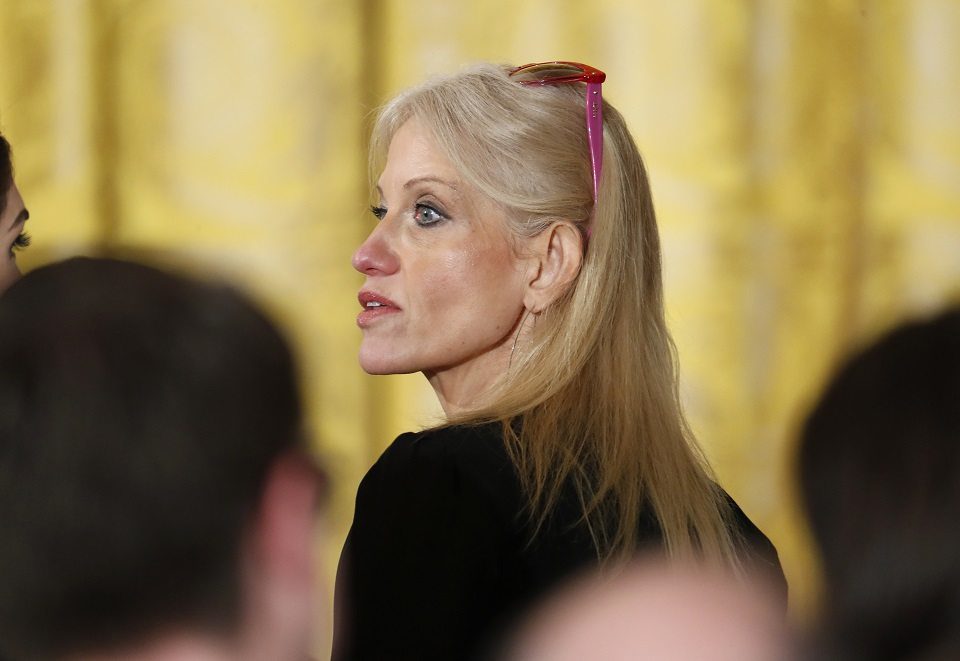 Kellyanne Conway has largely disappeared from television screens, but her ethical challenges remain, and continue to mount, as leading law professors file a misconduct claim against her.

White House Counselor Kellyanne Conway has been out of sight for a while, after a slew of missteps and blatant dishonesty with the media and the American people.

She finally reappeared at the Conservative Political Action Conference (CPAC) annual gathering, where she criticized feminism as "anti-male" and "very pro-abortion," and claimed of her boss, Donald Trump: "I find him to be very kind and generous. I find him to have a great sense of humor."

Her CPAC moderator, conservative commentator Mercedes Schlapp, assured her, "We’ve got your back, Kellyanne." Conway has claimed that Trump has her back as well, despite her being shunned by major media outlets such as CNN and MSNBC's Morning Joe for lack of credibility.

And she will need that support: Alongside a pending ethics complaint, filed by Citizens for Responsibility and Ethics in Washington, stemming from her blatant promotion of Ivanka Trump’s merchandise on national television, Conway is now also facing a professional misconduct claim, filed by a group of prominent law professors specializing in legal ethics.

As filed with the Washington, D.C., bar, the complaint states:

[W]e believe that lawyers in public office—Ms. Conway is Counselor to the President— have a higher obligation to avoid conduct involving dishonest, fraud, deceit, or misrepresentation than other lawyers. Although the DC Rules contain no Comment specifically relating to 8.4(c), the American Bar Association’s Model Rules of Professional Conduct (MR) make this point. MR 8.4(c), Comment 7 states that ‘Lawyers holding public office assume legal responsibilities going beyond those of other citizens. A lawyer’s abuse of public office can suggest an inability to fulfill the professional role of lawyers.’

The ethics lawyers point out many of the misrepresentations and instances of unethical and potentially illegal behavior by Conway during her tenure as Trump’s counselor as evidence that "her conduct, clearly intentionally violative of the rules that regulate her professional status, cries out for sanctioning by the DC Bar."

They specifically refer to (1) her defending administration falsehoods about Trump’s inauguration crowd size and relationship with intelligence agencies as "alternative facts;" (2) her repeated references to a "Bowling Green Massacre" which never occurred, and misrepresentations about the Obama administration’s refugee policies; and (3) her potentially illegal advertisement of Ivanka Trump’s merchandise lines on national television.

The professors who filed the complaint are clear that it was the combination of Conway’s significant position in government, and the extreme degree in which her actions in public service fall outside of standards of normal, proper conduct for attorneys, that led them to request the D.C. bar to investigate and potentially sanction her, which could include disbarment.

The serious nature of their complaint letter is unequivocal:

We do not file this complaint lightly. In addition to being a member of the DC Bar, Ms. Conway is a graduate of the George Washington University Law School, one of the District’s premier law schools. We believe that, at one time, Ms. Conway, understood her ethical responsibilities as a lawyer and abided by them. But she is currently acting in a way that brings shame upon the legal profession.