Home National 'Moderate' GOP senator bizarrely claims phasing out Medicaid will not phase out...
Progressive journalism is under attack. Please help us fight back!
DONATE 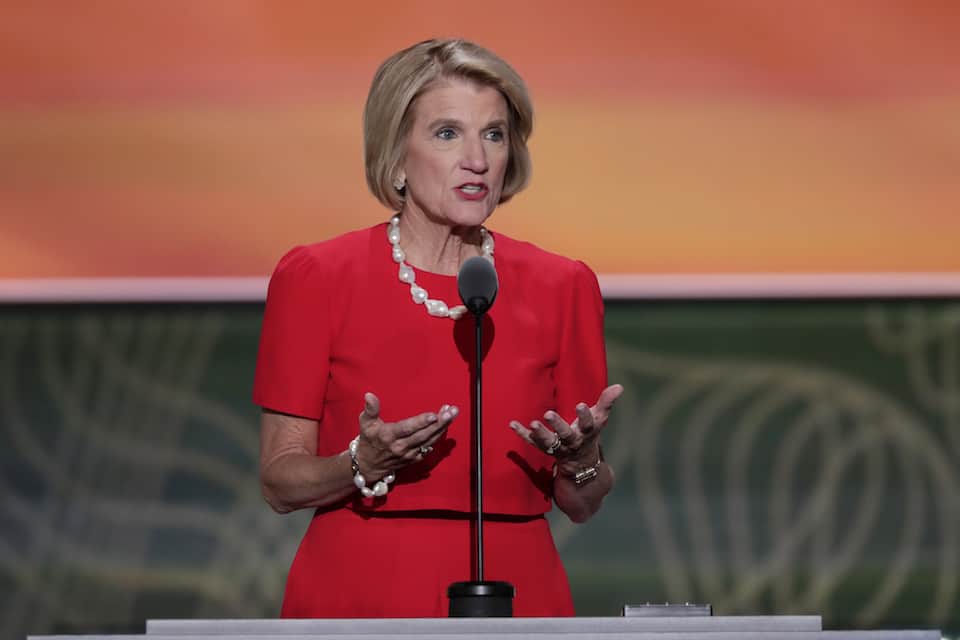 Shelley Moore Capito, the supposedly moderate Republican senator of West Virginia, doesn't want voters to think she wants to phase out Medicaid. But that's exactly what she wants to do.

One of the few details that has leaked from the secret GOP Senate meetings on repealing Obamacare is that Senate Republicans — just like Speaker Paul Ryan and his House colleagues — want to eliminate the Medicaid expansion.

That means 14 million people in 31 states and D.C. would lose coverage if the GOP bill becomes law.

The only difference is that House Republicans want to start phasing out Medicaid immediately, while Senate Republicans favor phasing it out over the course of seven years.

Peter Sullivan, a writer for The Hill, asked a supposedly "moderate" GOP senator, West Virginia's Shelley Moore Capito, how she justifies supporting the seven-year phaseout when it hurts all the same people she promised to protect:

SULLIVAN: You're OK with a seven-year phaseout of the Medicaid expansion funds?

CAPITO: I phrase it as a seven-year transitional period either to Medicaid or to coverage that's as good as the Medicaid coverage that folks are on. I've said repeatedly, I don't want to drop anybody off. I'm not phasing anybody out of anything.

SULLIVAN: But once the higher federal funding is gone, how would people maintain coverage?

CAPITO: Well, we have to make sure that if it goes forward that they have an availability of coverage that's affordable and as broad as what they need, that's the transition.

This explanation is utter nonsense. Capito says she's not "phasing out" Medicaid, she's just "transitioning" people off it — which means the exact same thing. Whichever phrasing she prefers, millions will ultimately lose their coverage if the Republican repeal plan becomes law.

And while she claims that some people will be transitioned to coverage that is "as good as Medicaid" and "affordable and as broad as what they need," she does not explain what that coverage is or how they will pay for it. The truth is that no such program exists.

Capito, for the record, is not part of the Senate working group actually drafting the bill, and has not seen it. She does not actually have any idea what this bill is going to look like, or whether it has any alternative for people who lose Medicaid coverage.

Nonetheless, the second the seven-year phaseout was reported, she seemed to decide that was enough window dressing for her to support the GOP plan. And she's not alone. Several Republican senators who made a big show of opposing Medicaid repeal, like Nevada's Dean Heller and Ohio's Rob Portman, now support this proposal, even though it would kick all the exact same people off their insurance, just like the plan they claimed to oppose.

Capito's about-face on Medicaid, and her inability to explain it, is a warning to anyone hoping Republican infighting will kill the Senate bill. When push comes to shove, and the optics are worked out, Republicans all agree on taking health care from the poor and sick. Only the resistance of American people can stop them.