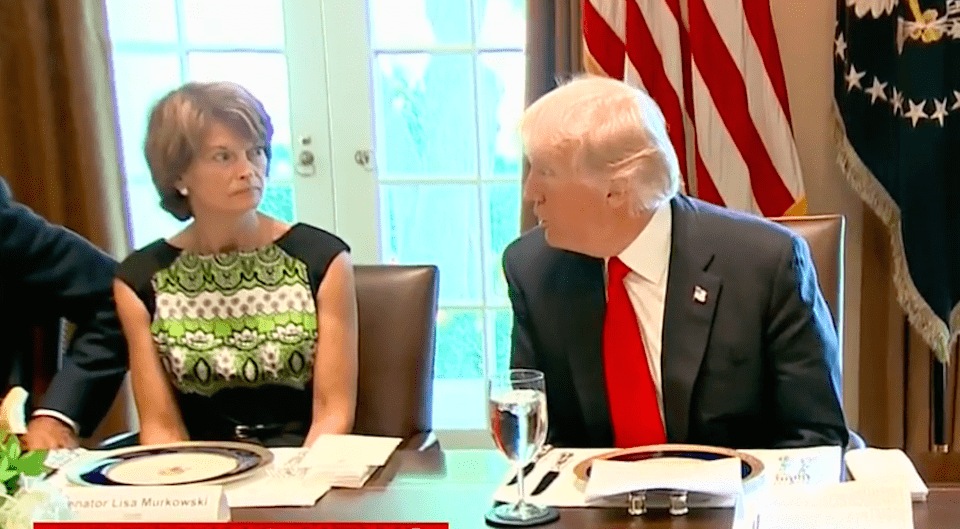 A moderate Republican female senator's body language tells you all you need to know about her feelings toward Donald Trump and the Republican health care bill he's trying to help GOP leaders ram through.

It's being drafted in secret by a committee that includes no women. There have been no public hearings. Few senators have apparently even seen any text of the bill. And the media was just banned from conducting interviews in the Senate halls.

Referring to a recent Senate GOP meeting on the bill, Murkowski revealed to her home state paper just how vague and detail-free the process has been:

The meeting Tuesday included "an overview of kind of policy goals, and so in terms of specific details, it was pretty general," Murkowski said. "One of the goals is reduce cost. Oh! Well, of course we're all in agreement here. But how do you reduce the costs? That's where the devil is in the detail there."

Murkowski further pointed to a "wide divergence of views" among her party on Medicaid expansion, pre-existing conditions, and tax credits and indicated that she didn't see her party leaders moving the caucus toward consensus legislation.

So when Donald Trump invited 15 Republican senators to the White House to discuss the bill, and she was seated right next to him, her reaction was fitting.

Straight-faced and unamused, Murkowski's demeanor stood in stark contrast to that of Trump supporter Sen. Joni Ernst, who sat on the other side of Trump, all the while nodding and smiling.

Murkowski sits still, leaning away with a stern look, even as Trump cracks a campaign joke. pic.twitter.com/Gz04khwJVr

The disastrous Republican health care bill should make every member of the U.S. Senate uncomfortable. Murkowski just showed that she is certainly among them.