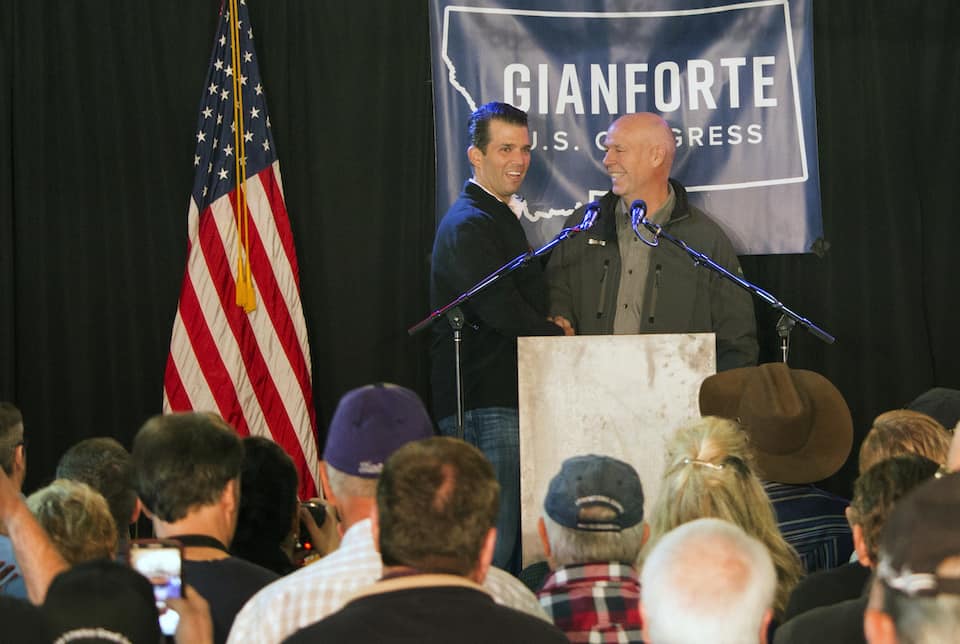 (AP Photo/Bobby Caina Calvan, File)
Get The American Independent in your inbox

The Republican candidate for an open House seat in Montana, who has been endorsed by Donald Trump, allegedly assaulted a reporter before a TV interview.

Ben Jacobs of The Guardian tweeted, "Greg Gianforte just body slammed me and broke my glasses." In a follow-up, he noted that a television crew was present.

Greg Gianforte just body slammed me and broke my glasses

There was a local TV crew there when Gianforte body slammed me. Audio is posting soon at @GuardianUS

The Guardian released audio of the incident. On the recording, Gianforte is asked about the recent CBO score of the Republican health care bill, then a loud crash can be heard and a man says he is "sick and tired of you guys." Jacobs then says, "You just body slammed me and broke my glasses."

Buzzfeed reporter Alexis Levinson was at the scene of the incident, and described it on her Twitter account. "Ben walked into a room where a local tv crew was set up for an interview with Gianforte," she wrote, adding, "All of a sudden I heard a giant crash and saw Ben's feet fly in the air as he hit the floor."

Levinson said she then heard "angry yelling" that "sounded like Gianforte."

Further, another witness caught Gianforte in a vehicle speaking to sheriff's deputies, and also noted that one person (identity unknown at this time) had been transferred to the hospital.

Gianforte sitting in a Jeep. Sheriff's deputies were talking to him earlier. Now a medic is at the window talking with him. #bdcnews #mtal pic.twitter.com/JsT4tTYt82

One person was transferred from the scene to Bozeman Health Deaconess Hospital, Hyalite Fire Chief confirms with me. #bdcnews #mtnews #mtal

A local reporter said that Gianforte refused to answer his questions, but was overheard speaking to his lawyer.

Gianforte is running against Democrat Rob Quist in the closely watched race, and has been criticized for his donations to anti-LGBT hate groups, and for discriminating against disabled employees at his business.

And he was recently endorsed by Donald Trump, who recorded a robocall for his campaign, urging voter, "Get to the polls and vote for Greg. That's Greg Gianforte, you'll be very proud of him for years to come."

While Trump won Montana by 20 percent in 2016, Gianforte has been forced to spend in the state to defend against Quist's strong campaign.

And an incident like this surely won't do Gianforte any favors at the ballot box on May 25.