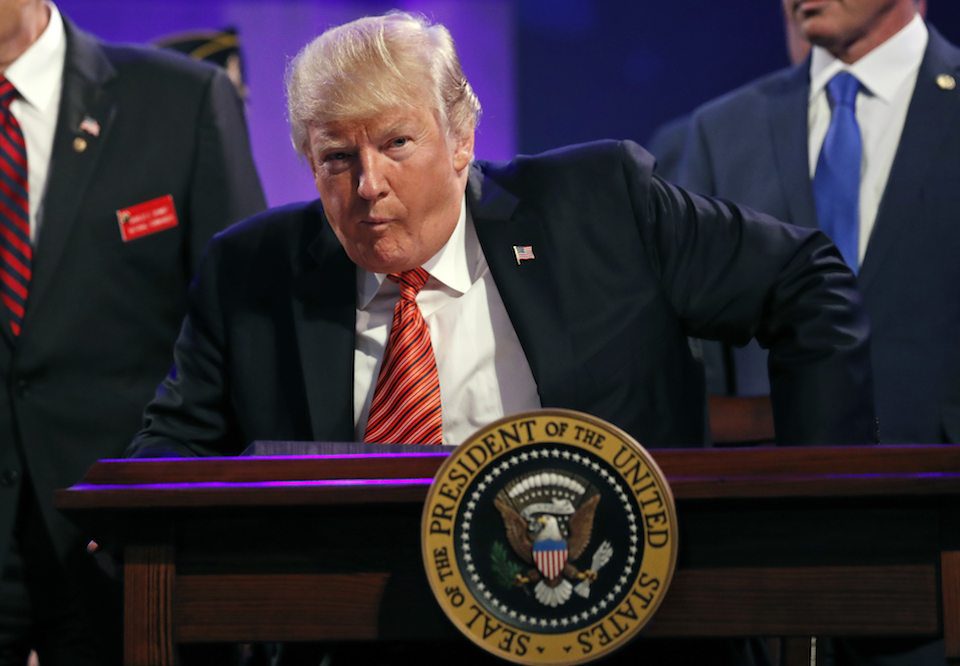 While Donald Trump gives aid and comfort to white supremacists, over 270 mayors, including dozens from red states, have signed on to the Compact to Combat Hate.

After the horrendous display of hate in Charlottesville, Virginia, Donald Trump repeatedly equivocated between neo-Nazis and and those who oppose their hateful ideology.

While many white supremacists publicly cheered and supported Trump’s remarks, the majority of Americans recoiled in horror. Could it be that difficult to take a firm stand against people carrying Nazi flags and chanting racist and anti-Semitic slogans?

Apparently so. But those on the right side of history are not going to let those hateful statements be the last word.

In response to the abject failure of leadership from this administration, the U.S. Conference of Mayors teamed up with the Anti-Defamation League to announce a Compact to Combat Hate, Extremism and Bigotry.

And in a promising sign of unity across political lines, many red state mayors were eager to sign on and speak out.

"As leaders, we must stand up to hate and bigotry — and we must speak loudly and with conviction," said Mayor Greg Fischer of Louisville, Kentucky.

Austin, Texas, Mayor Steve Adler added, "Terrorism by white supremacists, like what took place in Charlottesville, is a clear and present danger to America’s cities."

The compact is a "new initiative to fight extremism and bigotry and to promote the fundamental principles of justice and equality that define America."

With a ten-point plan, the signatories are committing to using their offices to fight back against the kind of vile hatred and violent actions committed by the neo-Nazi mob in Charlottesville. The second point in particular is one that the Trump administration could have used:

"Denounce all acts of hate wherever they occur."

(Note to Trump: this includes when white people are the perpetrators of hate and violence. Which happens a lot.)

The plan also includes a commitment to celebrating diversity and to elevating anti-hate programs in schools. And it encourages civic and community leaders to use their bully pulpits to "expressly reject extremism, white supremacy and all forms of bigotry."

More than 270 mayors have already signed on to the compact, including dozens from red states, like Alabama, Alaska, Arizona, Georgia, Kansas, Louisiana, Mississippi, Nebraska, North Carolina, South Carolina, and Tennessee.

When the Greatest Generation stormed the beaches of Normandy, America was united against the evils of Nazi Germany. In the aftermath, as photos and stories from concentration camps emerged and the world was shocked to the core by the horrific Hitler regime, the response was clear: "Never again."

Yet less than a century later, America has a leader who embraces white supremacists and Nazis as chief advisers, confidants, and key supporters.

America has a major political party that is quick to praise and hesitant to criticize a leader celebrated by Klan leaders and Nazis.

Whereas the White House was once a place that held moral authority, that authority is quickly eroding, perhaps altogether vanished.

But as this nightmare unfolds before us, local leaders from our cities and towns are fighting back. Where our eyes once looked to the seal of the president for guidance, we now look elsewhere, including to mayors across America.

Karen Freeman-Wilson, mayor of Gary, Indiana, said it best: "Our job is not only to condemn those sentiments that fly in the face of our democracy, it is to promote tolerance and love of all people and freedom and justice for all."

Stand Up Fight Back is a regular series that focuses on Democrats at the federal, state, and local level who are taking real, concrete actions to further the resistance and fight for progressive values.