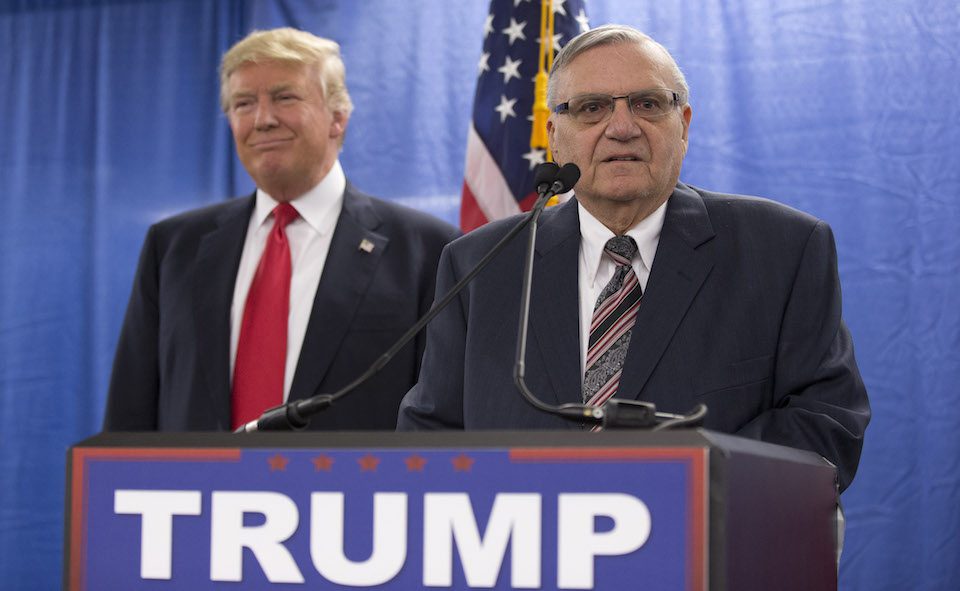 Trump called himself the "law and order" candidate, but he's obviously not the law and order president.

On Friday night — as Hurricane Harvey headed toward Texas, devastating the city of Houston — Donald Trump was repaying a political favor to the criminally racist former sheriff of Maricopa County, Joe Arpaio.

Arpaio was convicted of criminal contempt for refusing to obey the court that ordered him to cease his lawless and racist practices of illegally detaining prisoners and torturing them in a jail that he gleefully described as a "concentration camp."

This is the man Trump pardoned on Friday, as Texas braced for a catastrophic hurricane. And on Monday, the "Morning Joe" crew pointed out just how despicable it is that Trump pardoned a "thug" — especially after Trump spent 2016 crowing that he was the "law and order" candidate.

TRUMP: I am the law and order candidate.

SCARBOROUGH: Oh, really? Because it's really not looking like it this morning after he he pardons a thug.

BRZEZINSKI: That was Donald Trump back on the campaign trail of 2016.

SCARBOROUGH: A thug. And an embarrassment.

BRZEZINSKI: — who was convicted of criminal contempt for violating a court ruling that ordered his department to stop illegally detaining people based on suspicions about their immigration status.

As many have noted, Arpaio is in no way a good candidate for a presidential pardon. His notoriously racist practices cost taxpayers tens of millions of dollars in various lawsuits. He terrorized his community for more than two decades, has shown no remorse at all for his crimes, and, as a former law enforcement official, had a particular duty to respect and enforce the rules of law, rather than so flagrantly abuse and violate it.

Trump issued his pardon in a clear signal to the white supremacists he has been coddling that that he is on their side, rather than on the side of the American people and the rule of law.

As California Rep. Adam Schiff, the ranking Democrat on the House Intelligence Committee, noted on Friday, Trump also used this pardon as a way of "sending a message to people that may be under investigation by Bob Mueller that 'I have your back and I’ve got a pardon waiting for you.'"

Despite the ongoing disaster in Houston, where tens of thousands of people will be displaced and hundreds of thousands will need government aid, Trump is more concerned with defending his atrocious pardon of Arpaio. He retweeted a right-wing columnist who attacked a former adviser to President Barack Obama for rightly criticizing the pardon.

As of Monday morning, Trump has yet to use his Twitter account to offer specific guidance, support, or sympathy to the people of Texas. And unlike his predecessor, he has not bothered to tell Americans throughout the country how they can help their fellow citizens.

He has made his priorities clear, and they are, as always, about Trump and Trump alone.