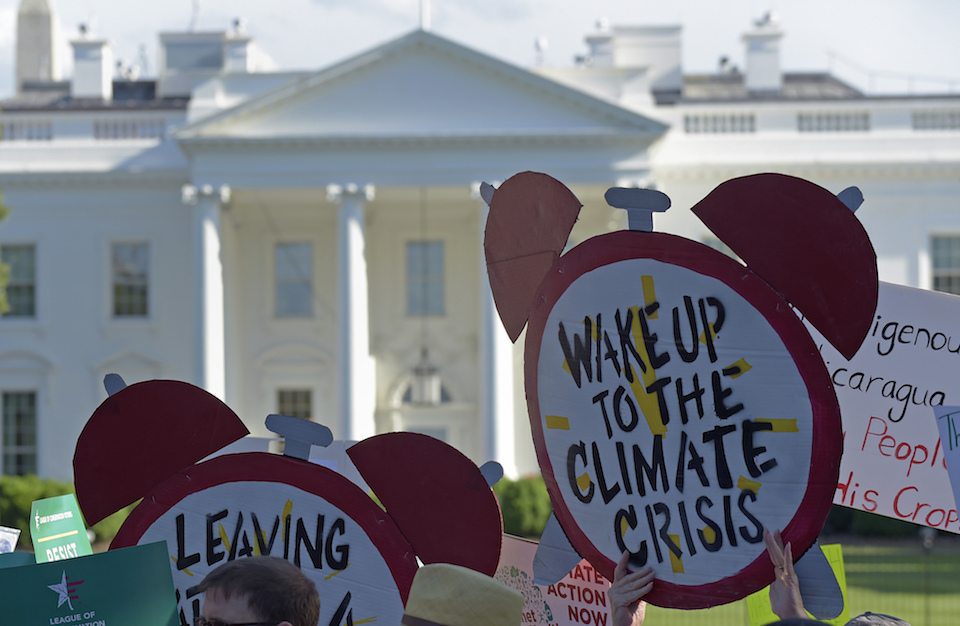 The Republican Party's hostility toward, and outright denial of, climate change and science in favor of moneyed interests is put in a stark spotlight by recent massive natural disasters.

The Republican Party as a whole has made no secret of their antagonism toward science in general, and climate science in particular.

In contradiction to the vast majority of the world, the party remains largely beholden to a worldview which either rejects the concept of climate change altogether, or at least downplays the severity of it and the role that human activity plays in its exacerbation.

Donald Trump himself has referred to climate change as a "hoax," possibly perpetrated by China. And his utter disregard for the global environment was made clear by his proposed budget which targeted the health of the planet, and his decision to pull the United States out of the Paris climate accord.

Even more galling, Trump named a longtime antagonist of the Environmental Protection Agency to head that very organization, and has nominated a climate denier to be the new head of NASA.

The Wall Street Journal reports that, in recent weeks, hundreds of EPA staffers have retired, many of them accepting voluntary buyouts offered by the Trump administration as part of their overarching goal to shrink many government agencies down to nearly nothing.

And even as the nation is bearing the brunt of multiple massive natural disasters — disasters clearly influenced by climate change — many in the GOP are still more interested in siding with wealthy fossil fuel friends than with average citizens of the country.

As Vox reports, "Climate denial is less credible, but more powerful, than ever."

Right wing radio host Rush Limbaugh's conspiracy theories about hurricane warnings may seem laughable to most people, but they hold frightening sway with a large swath of the public. And they dovetail frighteningly with the many years of efforts by the fossil fuel industry to reject and bury the truth of climate science in order to protect their bottom line.

And the Republican Party is happy to do their bidding.

As Tom Steyer, a leading environmentalist and the founder of the environmental advocacy organization Nextgen America, "The politicians who take the money from the fossil fuel interests and then lie about what's happening are now watching what's happened as a result."

"Of course they don't want to talk about climate change right now," Steyer notes, "because they're the people who have enabled the additional problems to happen."

In addition to Hurricane Harvey and now Hurricane Irma and José, there are "record wildfires across the West" proving the dangerous reality of climate change denialism.

In Steyer's troubling assessment, "this is like a drunk driver after an accident telling me, 'Let's not talk about drinking and driving.'"

But we must talk about climate change now: "Of course we're worried about the people — this is all about human tragedy. But don't come to me and say, 'I don't want to take responsibility for what I did.'"

As millions of people are displaced from their homes, and as lives are lost to these massive disasters, it is clearly far past time to confront the ravages of climate change and to protect the present and future populations from its growing dangers.

If Trump and the GOP really want to make America great, doing everything in their power to defend it from destruction by natural disasters — and to actually provide help and relief to victims — would be a good place to start.