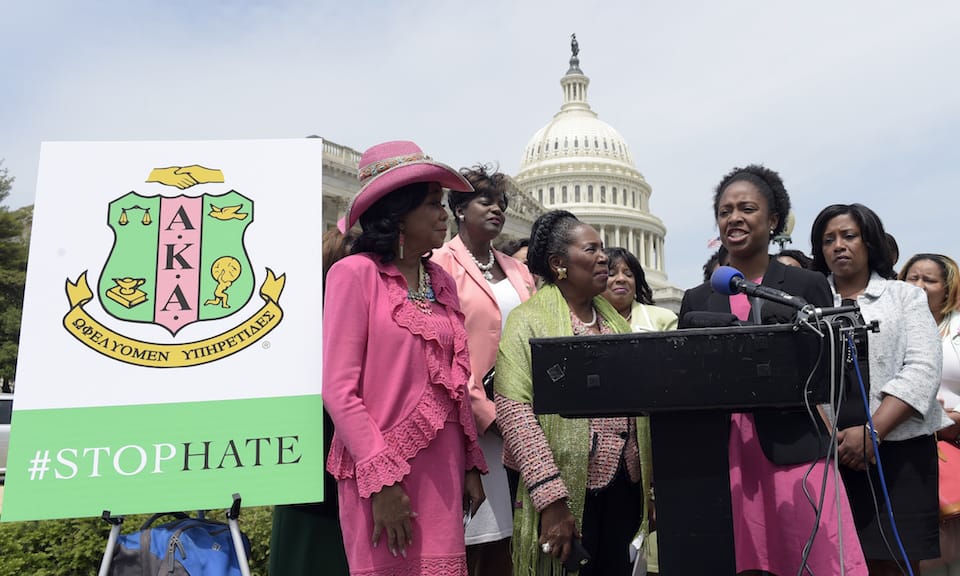 The post-election fears of Black families regarding the safety of the children they send off to college have become bitter reality under Donald Trump’s watch.

As we approached the first Thanksgiving following Donald Trump’s election to the presidency, I described how the season of thanks had become a “season of fear” for Black families. The "countless media stories of violence and racially motivated provocations on college campuses in the wake of the presidential election" were not just headlines. These news stories hit home in the homes of people I know and love.

As we now celebrate our first Mother’s Day under the current president, the situation has only worsened. CBS News recently reported on the continued proliferation and expansion of hate incidents and white supremacist activities at our nation’s colleges and universities.

Unfortunately, the president has failed to demonstrate leadership or any sense of concern about the epidemic, which is troubling to African-American mothers like myself.

Trump has appointed white nationalists to positions of prominence within his administration and has sown seeds of hate and racial division at gatherings of his supporters. But he has shown no interest in protecting my child or the children of my Black, Latino, Asian, Muslim, Jewish, or LGBTQ friends from the terror they face in schools and on college campuses.

As Jonathan Greenblatt, director and CEO of the Anti-Defamation League, commented to CBS News,"It seems clear that the extremists feel emboldened in this current political climate."

Under Trump, there has been an “unprecedented” and successful recruitment effort on college campuses by white supremacist groups. Newsweek recently documented an extensive campaign by white nationalists to flood college campuses with racist posters and materials.

And the Southern Poverty Law Center, which has been tracking these activities closely, concluded:

Intended to frighten minority students as well as to persuade whites to join their causes, these orchestrated campaigns reveal that white nationalists see colleges as an important battleground in their war on a diverse and tolerant United States.

These collegiate recruits to white nationalism are unequivocal regarding Trump’s significance as a role model to their movement. One told CBS News, "We've been riding this wave of Donald Trump's election, absolutely. He's the closest to us that we've ever had in recent memory, although we'd like him to go a bit further."

No campus is immune.

The fear tactics hit home for me when, recently, members of my sorority on a campus I frequented as an undergraduate, were threatened in a vile, and of course anonymous, manner. Bananas marked “AKA,” the widely used shorthand for Alpha Kappa Alpha Sorority, were recently found hanging from nooses in multiple locations on the American University campus in Washington, D.C.

The incident took place on the very same day that one of AKA's members, Taylor Dumpson, began her duties as president of the university’s student government. Dumpson is American University's first Black student government president.

Since then, an outside neo-Nazi leader, Andrew Anglin, the founder of one of the largest hate sites on the internet, has begun to troll this young woman and other sorority members on campus with “racist taunts.” He launched a grassroots campaign among his vast, nationwide network to harass and intimidate Dumpson.

The university has had to engage local law enforcement to provide ongoing protection to Dumpson, just so she can go to class and carry on with her day-to-day life as a college student without fear of harassment or physical injury because of her race.

Alpha Kappa Alpha Sorority, Inc. is the oldest African-American sorority, founded in 1908, during a time of segregation and limited opportunities for people of color, with a commitment to education, excellence, and, most importantly, “service to all mankind.”

Unlike many other mainstream sororities, which concentrate on undergraduate social life, the African-American sororities like AKA and Delta Sigma Theta, as well as their fraternal counterparts, involve our members in a lifetime of community service, and have been prominent pillars of the African-American community for over a century. Delta Sigma Theta's impactful show of support at former Attorney General Loretta Lynch’s confirmation hearing, for example, made national news.

When I joined AKA as a freshman at Georgetown University, my college did not allow Greek-letter organizations to form chapters on campus, though it didn't restrict students from becoming members or participating in activities on other campuses.

One day I received a call from a fellow “soror” at American University, Star Jones. Yes, the Star Jones who became a legal correspondent and host of The View. She invited me and my fellow Georgetown AKAs to participate in activities with their chapter.

Our sisters at American University were smart, dynamic, and very involved in campus life. And they were generous. They welcomed us into their fold with open arms and kindness in a way that has left a lasting impression on me.

My fellow AKA Dumpson is continuing the hard-working, service-driven tradition of excellence exemplified by the women I knew on her campus many years ago, by serving the student body as its president. I cannot imagine what it must be like for her and my other young sorors to face racist taunts, intimidation, and terror, while trying to just get through their classes, studies, and day-to-day life as students. How frightening it must be for them to never know whether their tormentors will stick to faceless taunts or turn to physical violence.

A a mother who is nearing the time when I will be sending a young woman to college, I know that the fears and threats these young women and their families face will affect me even more directly soon enough. As someone who has walked in their shoes and and assumed that the path of my younger sorors would be easier and more equitable, I am disheartened to see how far and how quickly our times have regressed.

What these students face is more reminiscent of what my parents and their peers faced in the '40s and '50s, denied access to white campuses or treated as second-class citizens in the few integrated environments that existed at the time. Their experience was far worse than what I faced as a student in the '80s, and certainly not what I expected for the new millennium.

Neither American University, nor law enforcement, have yet identified the individuals or groups behind the banana nooses. And of course the internet trolls ignited by a neo-Nazi completely unaffiliated with the university are able to hide behind the cover of “free speech” to torment and threaten innocent young women. A recent piece from NPR's Code Switch, a show about race and identity, highlighted this dilemma:

Racist hate speech has come to emblemize free speech protections because the parties it injures lack social power. Students of color are expected to endure insults to their identities at the same time that celebrities win multi-million dollar defamation settlements and media companies scrupulously guard their intellectual property against plagiarism. ...

Powerful interests will find their way around the First Amendment to protect the status quo against antiracist protest. Asking student protesters to tolerate racist hate speech is to ask them to trust in free speech laws that have historically exempted the powerful and punished the vulnerable. When it comes to racism, the "marketplace of ideas" is not laissez-faire and never was.

As a mother, and a sister to the AKAs at American University, I wonder who will protect these young Black women. Certainly, by every indication, our nation’s president will not.