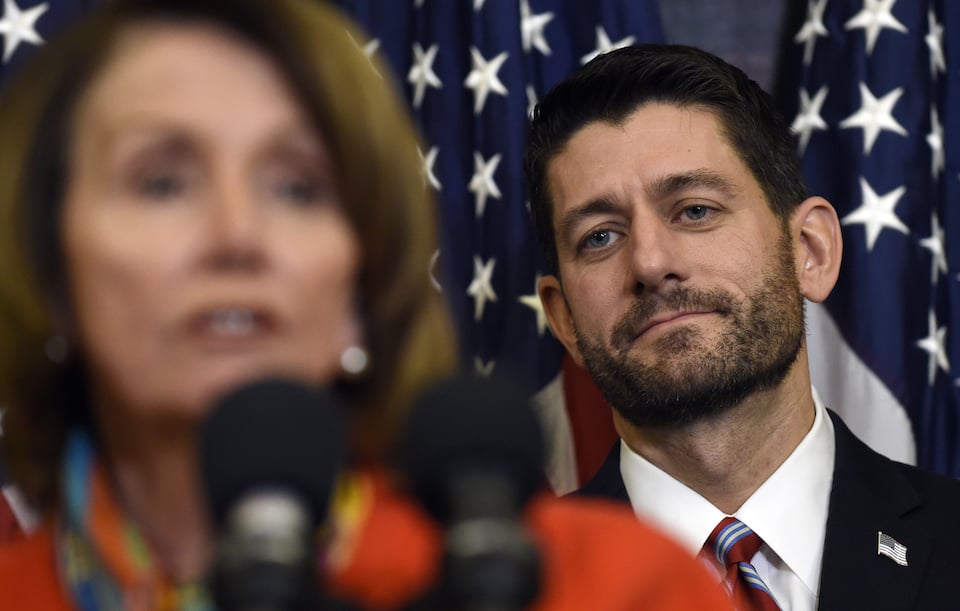 Despite Republicans's newest attacks on Democratic House Leader Nancy Pelosi, she has a longer history of significant legislative accomplishment than House Speaker Paul Ryan could ever hope to achieve.

Republicans eked out a narrow victory in the Georgia special election in part by going to their well-worn strategy of demonizing progressive leaders, particularly women, by attacking House Democratic Leader Nancy Pelosi and connecting the Democratic candidate Jon Ossoff to her.

But a look at Pelosi's record as leader of Democrats in the House — particularly in contrast to Speaker Paul Ryan and his predecessor, John Boehner — shows a considerable string of accomplishments her right-wing detractors would rather not bring up.

The New Republic described her as "one of the most substantive legislators in modern American politics," and the record backs up that assertion.

When President Barack Obama was first elected and tasked with fixing one of the worst economic catastrophes in American history, Pelosi led House Democrats to pass the Recovery Act, even as Republicans refused to give a single vote to help the country. The law helped turn the economy around, moving from thousands of jobs being lost every month to months of consecutive job growth that continues until today.

She followed that up by getting her caucus together to pass an energy bill, which The New York Times noted "was the first time either house of Congress had approved a bill meant to curb the heat-trapping gases scientists have linked to climate change." Pelosi shepherded the bill through despite massive resistance from Republicans and corporate polluters, as well as some reluctant Democrats.

After passing those and other pieces of legislation, Time magazine noted, "Pelosi's is a leadership operation that runs with uncommon discipline and harmony."

The Affordable Care Act, aka Obamacare, could not have made it through the House without Pelosi's leadership, as well. Again, Republicans refused to support the bill, and conservative activists raised hell in town hall meetings with Democratic representatives, telling them to "kill the bill." Yet Pelosi whipped the Democratic votes together for the legislation that expanded health insurance to millions and saved thousands of lives in the process.

"No one has fought harder to protect and expand women's ability to get affordable health care," said Cecile Richards, president of Planned Parenthood Federation of America.

Even after Democrats lost their majority in 2010, Pelosi's leadership in the House proved vital to the country. When then-Speaker Boehner could not get his fellow Republicans to vote to raise the debt ceiling, which would have been catastrophic for the domestic and global economy, Pelosi got the Democratic votes to save the country from economic disaster and achieve what the Republicans could not.

And earlier this year, when Ryan could not get his fellow Republicans in line, even after their party won the presidency and maintained control of the House and Senate, Pelosi got Democratic votes to pass an omnibus spending agreement. She was also able to drive Republicans to cut out many of the demands Donald Trump had insisted be included in the agreement, most notably, financing for a wasteful wall on the southern border.

Pelosi said at the time, "The omnibus does not fund President Trump’s immoral and unwise border wall or create a cruel new deportation force."

In contrast to Pelosi, Ryan's greatest legislative achievement thus far has been an extremely unpopular health care bill, which would strip health insurance from 23 million people. His congressional caucus is in constant revolt against his leadership, while he has had to rely on Pelosi to pull him through the serious business of governing.

No wonder they keep attacking her.