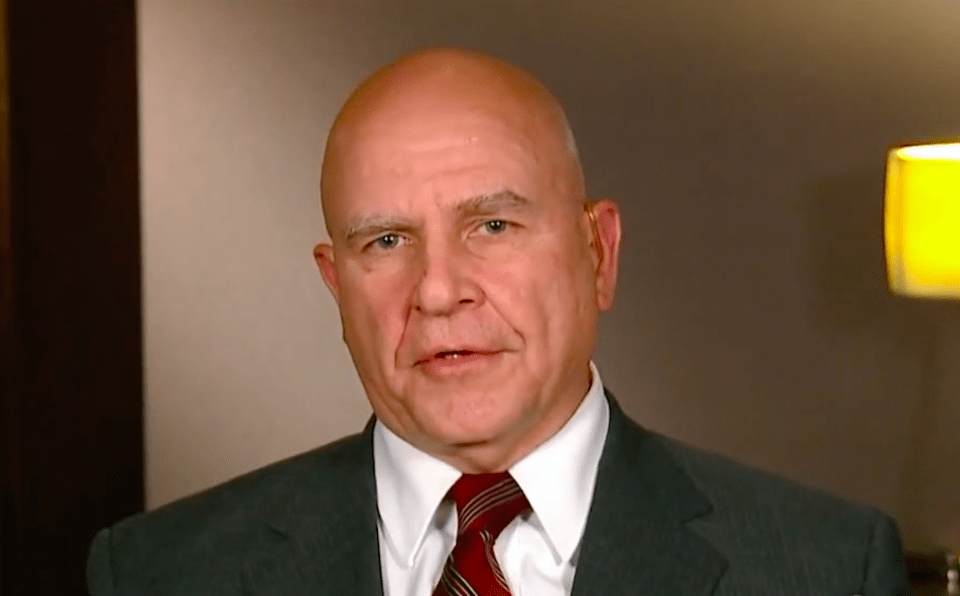 National Security Adviser H.R. McMaster was asked about Donald Trump's Oval Office meeting with Russian officials, and essentially confirmed that, even as Trump was bragging about firing FBI Director James Comey, he made no attempt to confront Russia for interfering with our elections.

Donald Trump's Oval Office meeting with Russian Foreign Minister Sergey Lavrov and Russian Ambassador and alleged spymaster Sergey Kislyak continues to generate news for the administration, and none of it is good.

The meeting itself was a chilling black mark, coming as it did the day after Trump's firing of FBI Director James Comey, and being covered by only Russian government media, while U.S. reporters were shut out.

News quickly emerged that Trump had shared classified information at that meeting, and later, that he boasted of firing "nut job" Comey in order to escape the pressure of the Russia investigation.

And in yet another troubling development, it also appears that Trump refused to confront Kislyak and Lavrov over Russia's interference in our elections.

On Sunday morning's This Week, host George Stephanopolos pressed National Security Adviser H.R. McMaster about the meeting, and not only did McMaster fail to dispute the comments about Comey, he also essentially confirmed Trump's weakness on Russia and U.S. election interference.

Asked repeatedly if Trump confronted Lavrov and Kisklyak over the interference, McMaster dodged by saying he didn't want to reveal more of the meeting, while undercutting himself by describing issues on which Trump did confront the Russians:

STEPHANOPOULOS: Do you understand how this might look though? To an average American, right now, you have the President of the United States telling the Russian foreign minister, in their first meeting, that the pressure is off because he's fired the FBI director investigating Russian interference in the campaign. Does that seem appropriate to you?

MCMASTER: As you know, it’s very difficult to take a few lines, to take a paragraph out of what are what appear to be notes of that meeting, and to be able to see the full context of the conversation. As I mentioned last week, the really [sic] purpose of the conversation was to confront Russia on areas, as I mentioned, like Ukraine and Syria, their support for Assad, and their support for the Iranians, while trying to find areas of cooperation, as in the area of counterterrorism and the campaign against ISIS. And so, that was the — that was the intent of that conversation, was to say, 'What I'd like to do is move beyond all of the Russia news so that we can find areas of cooperation.'

STEPHANOPOULOS: So, did the president confront them on their interference in our election? This was their first meeting.

MCMASTER: Well, you know, there already was too much that's been leaked from those meetings. And one of the things that I'm most concerned about is the confidence — the confidentiality of those kind of meetings, as you know, are extremely important. And so, I'm really concerned about these kind of leaks, because it undermines everybody’s trust in that kind of an environment where you can have frank, candid, and oftentimes unconventional conversations to try to protect American interests and secure the American people.

STEPHANOPOULOS: I understand your concern about leaks, but I could also see the feeling of perhaps someone, likely on your staff or in your community, who leaked this thinking that they had a duty to leak it because you have this apparent contradiction — the president disparaging the person who is investigating the Russians but not confronting the Russians who interfered in our election.

MCMASTER: Well, as you know, the initial leak that came out was a leak about concerns about revealing intelligence sources and methods — information that's not even part of the president's briefing. And so, in a concern about divulging intelligence they leaked actually not just the information from the meeting, but also indicated the sources and methods to a newspaper. I mean, it doesn't make sense, George.

STEPHANOPOULOS: I take your point on that, although it’s also — there's also the question of whether or not it was right for the president to give that information to the Russians. But I just asked a direct question. Did the president confront the Russians on their interference in our election?

Later in the interview, Stephanopoulos stated Trump's weakness as an apparent fact, and McMaster did not dispute him, but rather begged him to move on to other topics:

STEPHANOPOULOS: But it sounds like one of the difficulties of this meeting — and I do want to get on to the trip — is that when the president disparaged James Comey, when he gave that information to the Russians who had interfered in our campaign, when he apparently did not confront the Russians over this, he didn't even ask your advice.

MCMASTER: Well, George, what I'd like to talk about is where I am right now in Saudi Arabia. I mean, I think I answered the questions concerning the media, and I'd like to move on while we still have time.

Trump's weakness with Russia is no surprise, but McMasters' inability or unwillingness to even make an attempt at tough spin is telling.

This administration is wholly unconcerned with the Russians' assault on our democracy, but for how long will people with reputations and careers like McMaster's continue to cover for Trump? This performance suggests it will not be long.