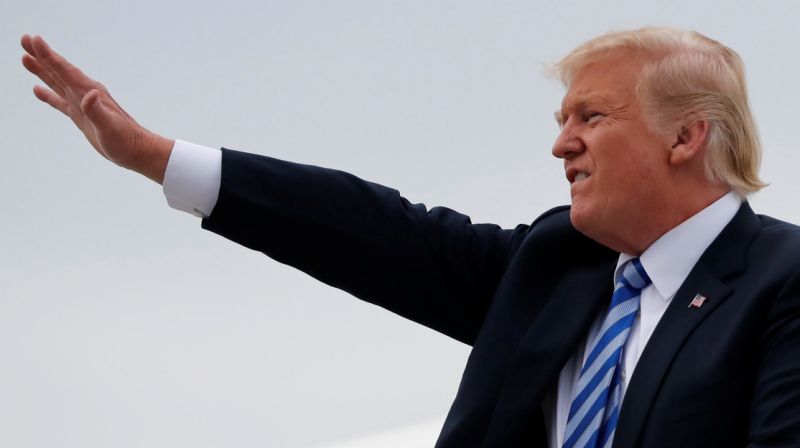 Trump, who praised rioting neo-Nazis and has promoted anti-Semitic imagery and language, ridiculously complained that Democrats "won’t take a stronger stand against Anti-Semitism in their conference."

His hypocritical outburst Wednesday was a nonsensical response to the ongoing Democratic debate over how to word a House resolution condemning anti-Semitism.

"It is shameful that House Democrats won’t take a stronger stand against Anti-Semitism in their conference," he wrote on Wednesday. "Anti-Semitism has fueled atrocities throughout history and it’s inconceivable they will not act to condemn it!"

Trump has absolutely no standing to criticize anyone on anti-Semitism.

After Trump-supporting neo-Nazis held a violent protest in Charlottesville, Virginia, in 2017 — a protest that killed a young woman named Heather Heyer — Trump insisted that they were "very fine people." Those same people had been chanting "Jew will not replace us" and other hateful slogans, but Trump refused to condemn them and instead defended their riot.

On the first Holocaust Remembrance Day of his presidency, Trump omitted any reference to the 6 million Jewish people murdered by Nazis.

During his 2016 campaign, Trump and his surrogates repeatedly used anti-Semitic imagery to whip up support among the bigots who constitute the base of his support. That quickly led the notorious anti-Semite and former Ku Klux Klan leader David Duke to become a Trump supporter and booster. Trump then refused to disavow Duke's endorsement.

His fellow Republicans also had no qualms about campaigning on anti-Semitic messages, invoking harmful and hateful images of Jewish people manipulating events with their money.

Rep. Jim Jordan (R-OH), one of Trump's most loyal defenders and apologists, recently used an anti-Semitic remark as part of the campaign to shield Trump from congressional oversight.

Trump's embrace of such bigotry, along with other Republicans, led Sen. Doug Jones (D-AL), who once prosecuted the KKK, to worry about the "green light" given to violent extremists who feel encouraged by Trump's rhetoric.

Trump has never apologized for his own record of anti-Semitism and is in no position to credibly criticize others for it.