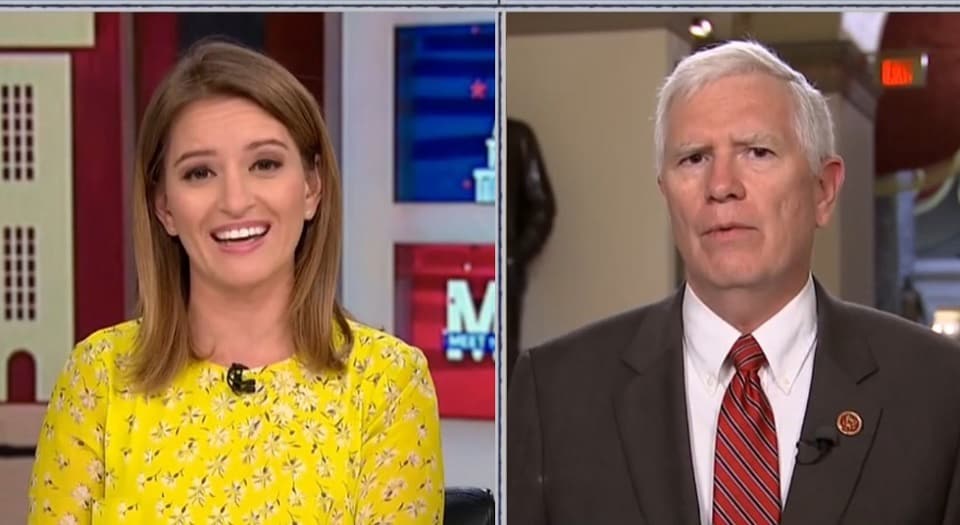 While many corporate media figures bear great responsibility for the ascension of Donald Trump, his nascent presidency has also caused some journalists to up their game. One of them has been NBC News' Katy Tur, who doggedly covered Trump on the campaign trail, despite being directly targeted for harassment by Trump, and has been consistently willing to challenge lies from Trump shills.

One of those shills is Rep. Mo Brooks (R-AL), a Freedom Caucus member who tried to defend Trump's many lies — about wiretapping, voter fraud, and his campaign's collusion with Russia — on the basis that he has only been in office for two months. Tur relentlessly challenged Brooks and his attempt to deflect attention away from Trump and onto Hillary Clinton. She also helped Brooks vividly describe the peril that he and other Trump-abetting Republicans face:

TUR: Congressman, if the president were Hillary Clinton, would you say the same?

BROOKS: Well, Hillary Clinton has a longer track record in public policy, and we saw her misrepresent the truth with respect to what happened in Benghazi and Libya. We also—

TUR: Respectfully, President Trump has misrepresented the truth so many times, I can't count them on my two hands.

BROOKS: We also saw the Clintons get payment of $500,000 at approximately the same time that the secretary of state's office was approving the sale of American uranium to Russian interests.

TUR: That had to be approved by seven different agencies, including an independent agency.

BROOKS: You ask me the same question a decade from now, and I'll be able to share my viewpoint about Donald Trump. But right now he's been there two months.

BROOKS: Let's wait 6 to 12 months. Both of those issues will have been more fully explored and we'll know more.

TUR: Do you think there was voter fraud? Massive voting fraud that changed the election? That he would have won the popular vote without this voting fraud?

BROOKS: I'm not familiar with evidence that would support that to the degree it has been claimed.

Brooks and the 99.97 percent of other Republicans who defend Trump will, indeed, be asked why they stood behind Trump as he took a wrecking ball to our country and its values, and will not be "a decade from now." They will have to answer for Trump much sooner — in the 2018 midterms — and if journalists like Tur continue to expose their complicity, Republicans will not have much to say in response.