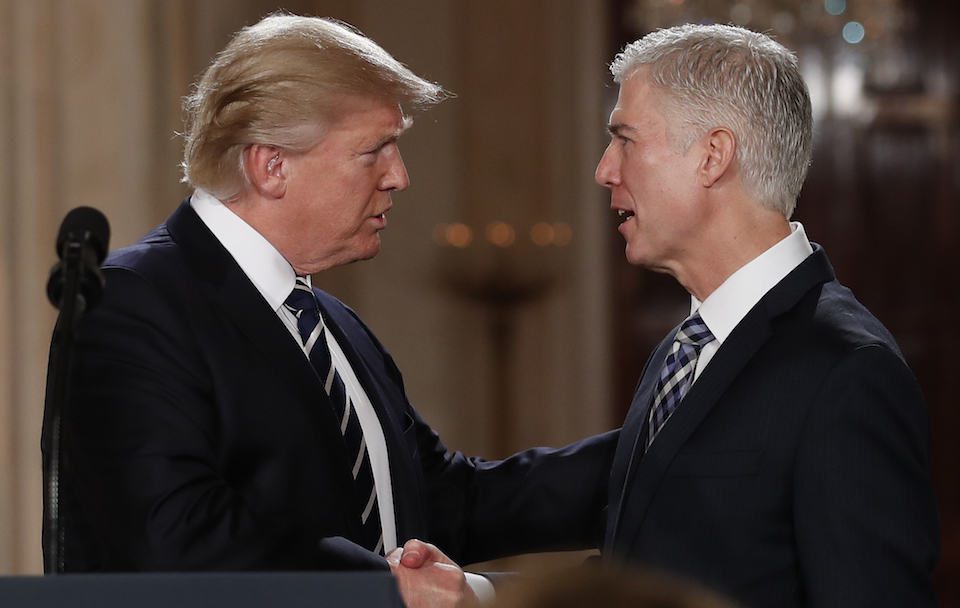 Supreme Court Justice Neil Gorsuch is making it clear he does not like national injunctions.

On Monday, the conservative majority of the Supreme Court issued yet another ruling the Trump administration had requested in an emergency capacity, something it has done over 20 times already. The Court rejected a lower court's decision to block the administration's "public charge" rule, meaning the administration is free to deny green cards to migrants who use might use public benefits, such as Medicaid.

The fact that yet another one of Trump's xenophobic policies is now in effect is bad enough, but there's more to the story. While the decision itself is unsigned — meaning the court just issued an order without saying who wrote it or explaining their reasoning — Justice Neil Gorsuch penned a concurrence, or agreement with the decision, joined by Justice Clarence Thomas, that expresses some very dangerous ideas about the role of lower federal courts.

In the concurrence, Gorsuch doesn't have much to say about the actual public charge rule. Instead, he uses it to complain about what he sees as the real problem: "[T]he increasingly common practice of trial courts ordering relief that transcends the cases before them."

What Gorsuch and Thomas are mad about are nationwide injunctions — where a lower court stops a federal law from going into effect across the entire country while litigation proceeds. A nationwide injunction typically occurs when a plaintiff, the person bringing the case to court, sues to block the law before it starts.

Though a concurrence doesn't have the force of law, Gorsuch is laying down a marker: He wants the Supreme Court to start restricting the ability of lower courts to block Trump's harmful agenda, even for the time it takes to litigate the issue. That way, the administration can continue to foist laws on the American people even while lower courts are still determining whether those rules are unconstitutional.

Gorsuch makes clear that the conservative-controlled court is interested in finding a way to stop national injunctions from happening. That may very well be because many of Trump’s proposed laws and rules, such as the transgender military ban and the travel ban, faced nationwide injunctions.

Lower courts don't issue nationwide injunctions just for the fun of it, or to overreach. Rather, courts issue them when a case is a matter of national concern and having differing laws across the country will create a problem.

The trouble comes when you have federal laws that are meant to affect a large group of people, particularly when those federal laws take away a right or privilege.

That was the case with the travel ban and the transgender military ban.

Gorsuch laments in the concurrence that there were too many different rulings from lower courts, as plaintiffs sued the government over the public charge law in a number of different locations. He notes there were some rulings for the government, some against, and then there was a nationwide injunction against the rule issued in federal district court in New York.

Take the military trans ban, for example. In July 2017, apropos of nothing, Trump tweeted out a policy barring transgender individuals from serving in the military. A massive amount of litigation ensued, with several lower courts, including the U.S. District Court for the District of Columbia and the U.S. District Court for the Central District of California, issuing injunctions barring the transgender ban from taking effect.

In this instance, a nationwide injunction, requested by the transgender plaintiffs who were either current members of the military or wished to join the military, was absolutely critical. It would have been unworkable to allow transgender people in Washington D.C. and California to enlist in the military while barring people from other states, for example,  particularly as litigation was still continuing.

Imagine a situation where a transgender soldier was denied the right to enlist when they lived in Arizona, but upon moving to California was allowed to enlist. Transgender people would be allowed to serve depending on what court's ruling affected their state, even though laws and rules related to the military are federal in nature.

It also would have defeated the purpose of the ban, as the ostensible reason for it was that the military as a whole would be compromised by the presence of transgender troops.

A nationwide injunction made sure this complicated situation didn't arise, simply leaving in place the pre-Trump status quo in which the military was preparing to allow open enlistment for transgender troop members.

The same is true of the public charge rule. Without a nationwide injunction, a situation could arise where an immigrant who decided to enter the United States in California, where the rule was initially blocked, could enter the country there and be eligible for federal benefits like Medicaid. But an immigrant who entered in Texas, where no injunction was sought, would be blocked from those same benefits. In other words, people who were otherwise situated the same under the law — immigrants who may need federal benefits — would have been treated differently based on where they entered the country.

Gorsuch, however, writes that nationwide injunctions are "patently unworkable" because they "[sow] chaos for litigants" when both sides have to "rush from one preliminary injunction hearing to another." His concern appears to be that both sides can't fully develop their arguments.

That argument might hold a little more weight if Gorsuch, along with the rest of the conservative wing of the Court, weren't so very eager to rush things along just so Trump gets his way.

As University of Texas School of Law Professor Steven Vladeck has written, Trump's repeated demands for extraordinary or emergency relief far outstrip his predecessors. In 2018 alone, the Trump administration went to the Court and demanded extraordinary relief in cases related to the census, environmental rules, Deferred Action for Childhood Arrivals (DACA), and the transgender military ban.

When George W. Bush was in office, his Department of Justice did it only five times in eight years. Under Obama, the DOJ did it only three times. But the current administration has already requested stays on 20 occasions in the first three years of Trump's term, and the public charge ruling marks the 10th time in three years the court has granted this administration extraordinary relief and stopped a lower court's decision from taking effect.

This is supposed to be rare, but, as Supreme Court Justice Sonia Sotomayor noted when she dissented from a stay of one of Trump's asylum rules in 2019, "[I]t appears as if the mechanism is a new normal. Historically, the Government has made this kind of request rarely; now it does so reflexively."

And why wouldn't it do so? It keeps winning. The government has been granted extraordinary relief in the transgender military ban, the travel ban, and the rule requiring asylum-seekers to first apply for asylum in Mexico — and now, of course, the public charge rule.  And all these were instances where the administration wanted to take rights away even before the courts have gotten to fully grapple with the issue.

The goals of the administration — counting fewer people in the Census, blocking more people from coming to the United States, stopping willing people from serving in the military, and harming the environment — fly in the face of existing laws and seek only to harm people. That's why lower courts keep stopping them from taking effect — to keep those who would be most harmed safe while the litigation proceeds.

But even that is too much for the Trump administration. They want to take away rights, they want to do it now, and they've got a Court that is happy to help.