Home National Nervous Trump lashes out at Russian dossier as questions mount about collusion
Progressive journalism is under attack. Please help us fight back!
DONATE 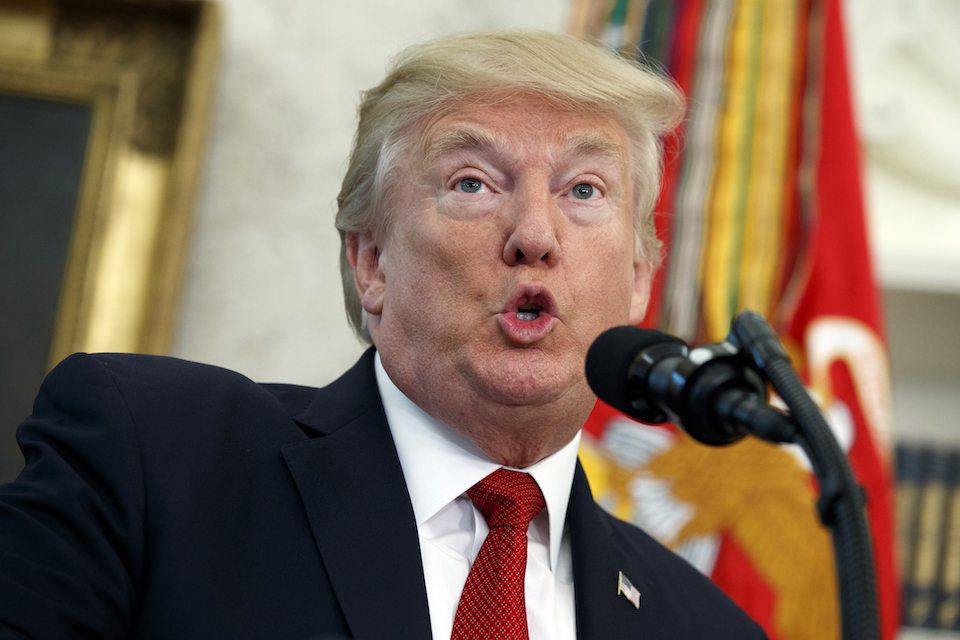 Who cares if the Clinton campaign paid for the dossier? Its contents have been confirmed again and again.

Insisting he’s the real victim from 2016, Donald Trump on Wednesday morning nervously lashed out a the so-called Russian dossier, the opposition research project that made salacious claims about him, and especially his dealings inside Russia.

Channeling Fox News, Trump tried to both dismiss the dossier and suggest its creation represents some vast conspiracy against him:

"Clinton campaign & DNC paid for research that led to the anti-Trump Fake News Dossier. The victim here is the President." @FoxNews

But large portions of the dossier have been confirmed over time, and Democrats paying for opposition research isn’t newsworthy in slightest.

The dossier was compiled during the 2016 campaign by former MI6 officer Christopher Steele and was overseen by the Washington, D.C. research firm Fusion GPS. Trump last week suggested the FBI itself had paid for the dirt-digging document — a completely delusional spin on the story.

The dossier is again making headlines this week because the Washington Post touted an exclusive Tuesday night, confirming that "The Hillary Clinton campaign and the Democratic National Committee helped fund research that resulted in a now-famous dossier."

Conservatives and some others in the press have treated this as a shocking revelation, but it’s not. It’s long been known that Republicans first funded the dossier and that Democrats then picked up the project during the general election.

As the Post itself noted in the story, "Research into Trump was funded by an unknown Republican client during the GOP primary."

The problem for Trump and Republicans in drawing attention to the dossier is that since its contents were first made public in January, when some observers tried to dismiss the document as nothing more than second-hand gossip, the veracity of the report has been confirmed again and again.

"Taken together, the series of reports painted a picture of active collusion between the Kremlin and key Trump campaign officials based on years of Russian intelligence work against Trump and some of his associates," Just Security, a national security news site, reported last month. "The dossier’s information on campaign collusion is generally credible when measured against standard Russian intelligence practices, events subsequent to Steele’s reporting, and information that has become available in the nine months since Steele’s final report."

Note that well before the Post report on Tuesday, Republicans have remained obsessed with the dossier and its origins. They seem convinced that if they can ultimately discredit it, the entire special counsel investigation into Trump’s collusion with Russians last year will fall apart.

Instead, by obsessing over the salacious dossier, Republicans are simply giving it continued prominence. They’re succeeding in keeping front and center a document that portrays Trump in the worst possible light.