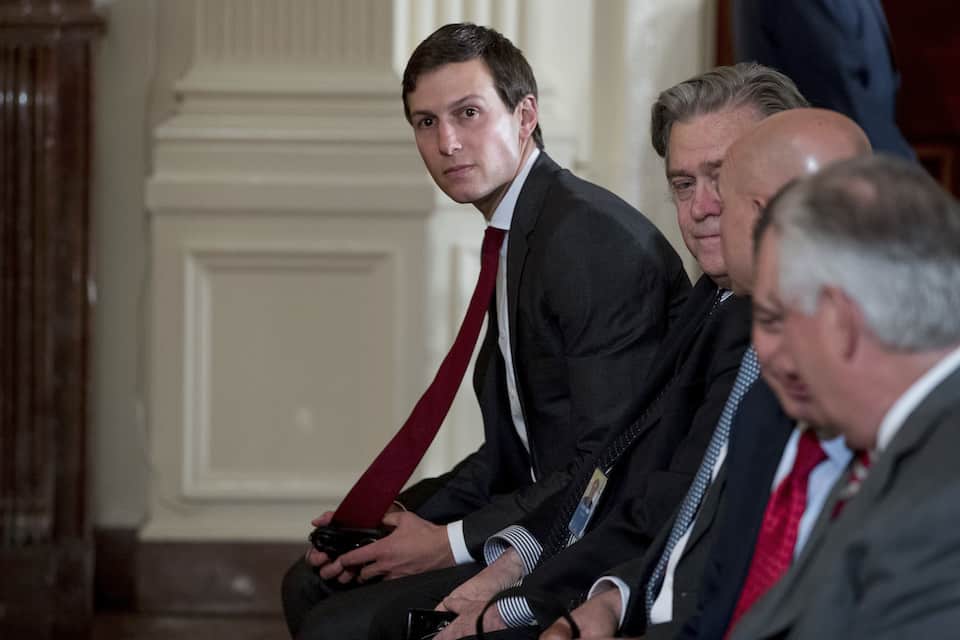 Donald Trump's son-in-law, Jared Kushner, who is also a top aide to the president, failed to disclose recently revealed documents that show he is a business partner with Goldman Sachs, giving the investment company yet another route into the White House.

Donald Trump's senior adviser and son-in-law, Jared Kushner, is a business partner with the investment firm Goldman Sachs, according to unearthed documents Kushner failed to disclose when he was given his White House job.

Kushner is an investor in Cadre, a tech startup, which the Wall Street Journal reports, "means the senior White House official is currently a business partner of Goldman Sachs Group Inc."

The investment, along with loans from banks on properties that he owns, was not disclosed on Kushner's financial disclosure form. Kushner also did not disclose his meetings with a Russian official, an act that some members of Congress have described as a possible felony.

The hidden documents add to the multiple conflicts of interest that Kushner and his wife, Ivanka Trump, have brought to the White House, refusing — like Donald Trump — to put distance between their private financial interests and their work for the government.

During the presidential campaign, Trump said that Goldman Sachs had "total, total control" over Hillary Clinton, and hinted at an international plot with anti-Semitic tones of Clinton meeting "in secret with international banks to plot the destruction of U.S. sovereignty."

But since assuming the presidency, Trump has surrounded himself has appointed officials from Goldman Sachs to the highest leadership positions in the government.

Treasury Secretary Steve Mnuchin came from Goldman Sachs, and senior adviser Steve Bannon worked for the firm in the past as well. Newly confirmed Securities and Exchange Commission (SEC) chairman Jay Clayton comes from Goldman, as does the director of the White House National Economic Council and the White House senior counselor for economic initiatives.

Like every other piece of Trump rhetoric and the associated promises, the entire line of anti-Goldman Sachs demagoguery and chants to "drain the swamp" of outside influences has turned out to be a complete joke.