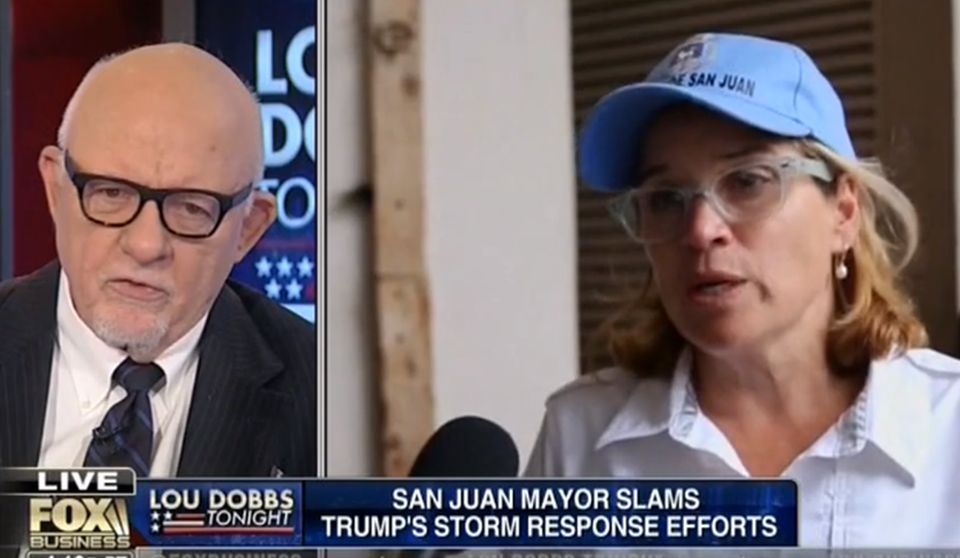 Fox continued its role as Donald Trump's propaganda arm, attacking San Juan Mayor Carmen Yulin Cruz — a 54-year-old woman who leads a city of over 2 million people — as a "very young woman" who is "overcome."

Fox's role in the media is to act as Donald Trump's quasi-official propaganda arm, and when he attacks, Fox hosts know their job is to follow his lead.

That's what happened when Fox Business decided to go after San Juan Mayor Carmen Yulin Cruz, who has been pushing and prodding the federal government to help Puerto Rico. In an emotional plea on television, she declared, "We are dying, and you are killing us with the inefficiency."

For this, Cruz became the latest figure to attract Trump's ire on Twitter, as he released a series of statements attacking her. That was Fox's cue to get in on the action.

It didn't matter to Fox that Cruz is the mayor of a city with a population of over 2 million, where 54 percent of Puerto Ricans live. They instantly dismissed her grave concerns, and attacked her for being a woman.

On Fox Business, host Lou Dobbs complained that Cruz was "out of her tree" and was "in some sort of partisan identity crisis."

Fox contributor Ed Rollins piled on in particularly ludicrous fashion, describing Cruz — who is 54 years old — as "a very young woman" who "is overcome by all the things that are going on around her."

DOBBS: Let's turn to San Juan, the mayor of — there, is just out of her tree, Ed. The president has had a bellyfull, she has waffled back and forth. I don't think she — she seems to be in some sort of partisan identity crisis.

ROLLINS: Well, I think she is a very young woman, and I think she is overcome by all the things that are going on around her, and I think the key thing for the president is just as he's done the last day — what he provides is not just the services that FEMA and other elements of government does, he provides a support system. And I think he really rose to the occasion today after this tragedy in Las Vegas.

If anybody is overwhelmed by the Puerto Rico crisis, it is quite obviously Donald Trump, who continues to petulantly whine and complain about critics of his response at every turn. At the same time, Trump continues to insist — despite objective assessments — that his administration's response to the storm in Puerto Rico has been great.

He has even lashed out at the people of Puerto Rico for not doing enough to make him look good.

Fox has dedicated itself to carrying water for Republicans, and has spent over 21 years doing so. The latest beneficiary is Trump, and Fox is more than happy to infantilize and minimize an accomplished public servant because she dared to speak out against the incompetence they continue to defend.