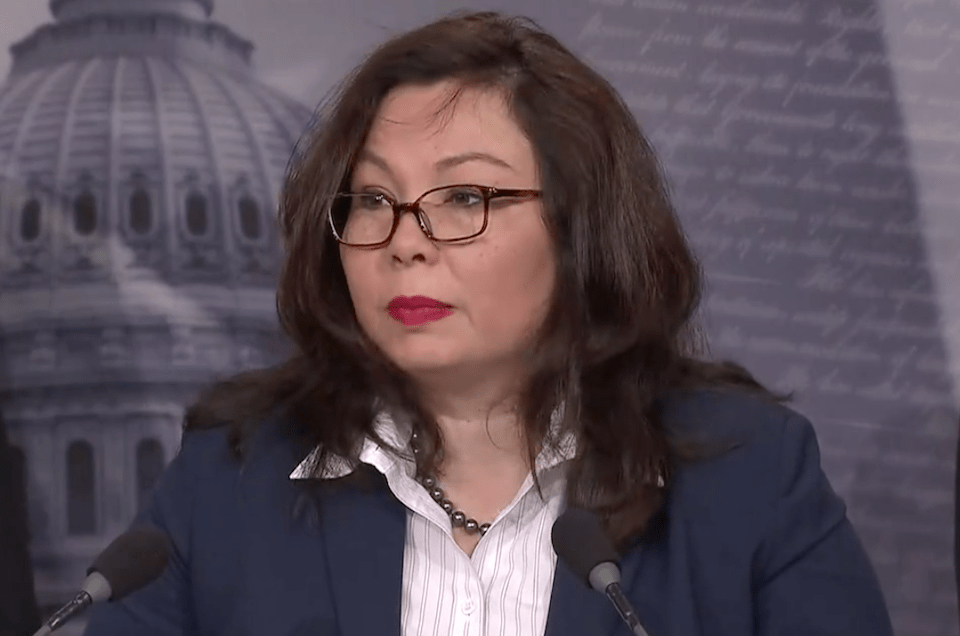 Sen. Tammy Duckworth/Facebook
Get The American Independent in your inbox

Donald Trump made a lot of promises during his presidential campaign, and thus far, he has either broken or ignored most of them. His neglect of care for the nation's veterans is particularly callous. And one of those veterans, Sen. Tammy Duckworth, is not about to let that slide.

Donald Trump's presidential campaign was filled with a lot of huge promises, but his presidency thus far has a marked lack of follow-through. And in some cases, he has gone in the exact opposition direction from his stump-speech rhetoric.

In no area is this more blatant than with regard to America's veterans. Despite a lot of nice talk regarding veterans before the election, Trump's administration has acted only to hurt them.

Senator Tammy Duckworth (D-IL), a veteran of the Iraq War, minced no words about Trump’s reversal. In a recent press conference, she noted that he promised to protect veterans, "yet his signature action as president — his one thing that he’s managed to get accomplished, this health care law passing out of the House — he immediately betrays them."

Under the health care repeal bill championed by Trump and most congressional Republicans, 7 million veterans would lose the tax credits that help them afford and access medical care.

In fact, the Paralyzed Veterans of America specifically warned the administration about the harm the repeal bill would bring to many veterans' lives, but they were ignored. Further, Trump's first proposed budget included cuts to crucial programs, like Meals on Wheels, on which many veterans rely.

For a party that often acts as though it has a monopoly on patriotism and supporting our troops, cutting off veterans' access to health care and food evinces monumental cognitive dissonance for which even Trump should be able to feel shame.

And Duckworth, who lost both of her legs to severe combat injuries, is making sure that shame is front and center.

She pointed out that the bill has not been given a CBO score, yet the Republicans still voted on it, knowing that it would kick millions of people off of their coverage or drastically raise their costs. And she particularly noted those tax hikes "buried deep within Trumpcare," which would force veterans to pay "thousands of dollars extra each year."

The law would prohibit any veteran who is eligible for care through Veterans' Affairs from receiving tax credits for purchasing insurance in the private market, even if VA care is not accessible to them because of their location, their income level, or because they are only allowed to receive VA care for injuries or illness sustained in combat.

That means that they have to take on the responsibility of their own health care. Trumpcare threatens to rip health care out of their hands. When I first learned about this anti-veteran provision that Speaker Ryan tried to hide in the so-called 'technical amendment' back in March, he gave his caucus just a few hours to figure out what was in the bill. So, with so little warning, you can't really blame them for not knowing what was in that bill.

But that doesn't explain what happened last week. They knew about the flaw, they tried to hide the flaw, we told them about the flaw, they went back and rewrote their bill, and they put it right back in. They knowingly decided to raise taxes on veterans and put veterans out on the streets without health care.

And for a president who is infamous for breaking his promises, this is a new low. Supporting our veterans should not be a Republican issue, or a Democratic issue. It certainly isn't for me. President Trump promised to improve care for veterans, but we now know he's willing to endanger millions of veterans who risked their lives to defend our nation. Apparently, 217 House Republicans are as well. The question left is: What will Senate Republicans do?

It is indeed an answer we are waiting to hear. The repeal bill faces steeper odds in the Senate than it did in the House, and in fact, Senate Republicans may introduce their own version of the legislation — though it is anyone's guess at this point if it will be an improvement upon the disastrous House bill.

One would hope that Duckworth's Republican colleagues would heed her wisdom, and her reminder that the GOP cannot claim to support the troops if they are so ready and willing to wrest support from veterans.