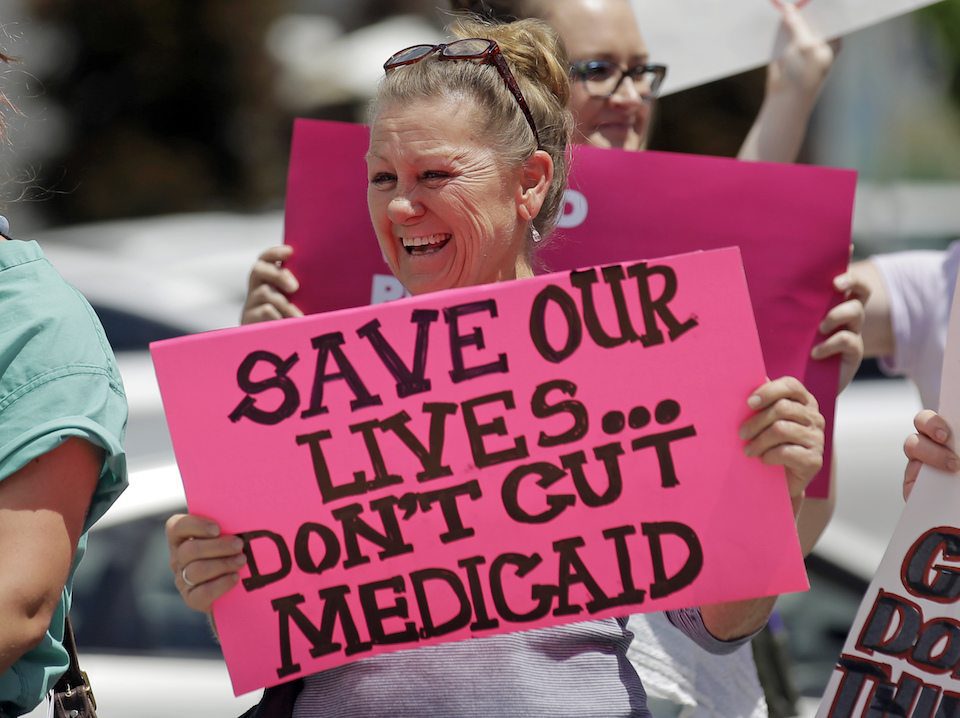 An already unpopular bill becomes more unpopular, with an overwhelmingly majority of Americans opposed to the GOP's plans to gut Medicaid spending.

Just as Republican leaders feared, sending senators home for the July 4th recess without having voted on the Republican health care bill did nothing to improve the image of the controversial legislation currently pending in the Senate. In fact, Americans think less of it now.

Republican lawmakers were confronted at every turn over the July break as opposition to their effort to repeal and replace Obamacare continues to swell. That’s confirmed by a new, wide-ranging Kaiser Foundation tracking poll that finds the Republican repeal-and-replace plan remains wildly unpopular, it continues to lose support, and even lots of Trump voters refuse to back it.

Today, a clear majority of Americans — 61 percent — have an unfavorable view of the GOP bill. That’s an increase of six points since just last month. Independent voters are squarely in the Democratic camp in opposing the Republican effort, with 63 percent of them against the bill.

Worse still, one-fourth of the public says their opinion of the GOP repeal plan has become “more negative” in the last month.

Generating overwhelming opposition is the Republican plan to gut Medicaid spending in the pending health care bill by $770 billion; 65 percent of Americans are opposed to reducing Medicaid support.

The GOP’s proposal to make massive Medicaid cuts is one reason the nation's largest doctors' group, the American Medical Association, condemned the latest Republican health care bill on Friday, insisting it “does not address the key concerns of physicians and patients."

Yes, Republicans promised for seven years to repeal and replace Obamacare. But they’re trying to do it with a bill that even lots of Trump supporters — 33 percent — do not view favorably. Instead, there’s a growing appetite for the parties to work together to help improve U.S. health care.

Seven in ten Americans, including 72 percent of independents and 46 percent of Trump supporters, want Republicans in Congress to work with Democrats to make improvements to Obamacare rather than repeal it, according to the Kaiser poll.

Yet Senate Republicans have completely locked Democrats out of the current process by barring them from the bill-writing process, refusing to hold public hearings, or allowing Democrats to offer any amendments.

Just 16 percent of the public, including 30 percent of Trump voters, says the current replacement plan being discussed fulfills most or all of Trump’s campaign promises about health care.

Americans clearly want to keep Obamacare, even as Republicans are trying to get rid of it.