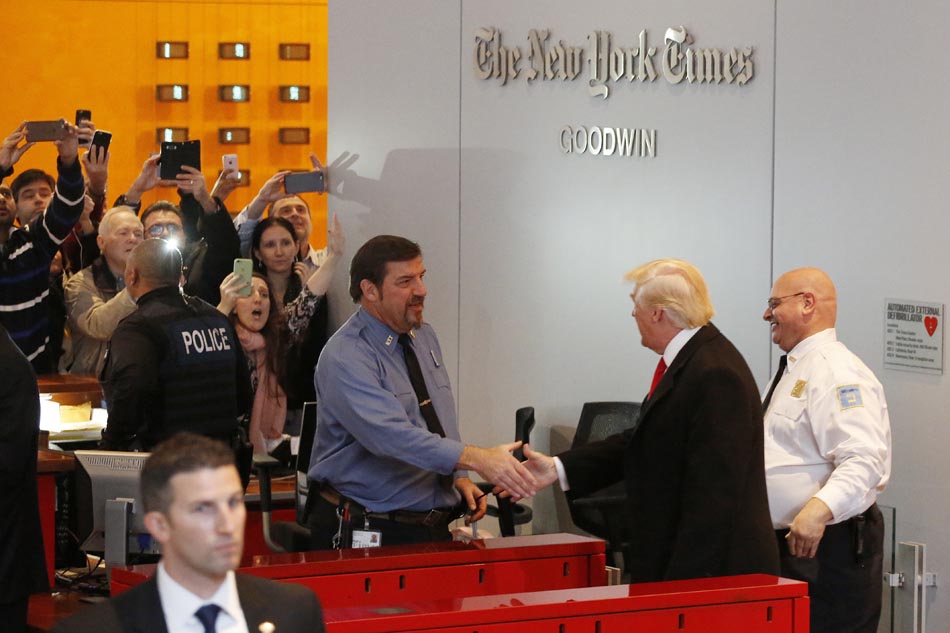 Recent readers of the New York Times were treated to two separate pieces of content devoted to President-elect Donald Trump's alleged focus on "jobs," neither of which took anything approaching a critical look at that premise.

Two recent items in The New York Times evince a troubling acceptance and elevation of Trump administration propaganda, without any factual basis.

Since his White House transition began, the only interest President-elect Donald Trump has shown in creating jobs has been for department heads who are bent on destroying their own departments, yet the NYT credits Trump, in a pair of headlines, with a genuine and strong focus on the issue.

In one piece, entitled "When Trump Meets Tech Leaders, Jobs Will Be on the Agenda," no policies for job creation are actually reported on, just the administration's claims. In the other, the reporter literally has his headline written by Trump (you must scroll down the page to find this item):

To Mr. Trump, the job of the president is to focus on jobs. Virtually everything else is subservient to that: diplomacy, science, conservation.

That headline is a reference to this Trump tweet, but the accompanying item never explains how Trump has been focused on jobs, instead explaining that job creation was the sole focus of Team Trump's press release on the selection of Rick Perry as secretary of energy.

The piece concluded that Trump's "jobs message" should be "the prism through which his selection of the Exxon Mobil chief executive Rex W. Tillerson for secretary of state, the Oklahoma attorney general Scott Pruitt to lead the Environmental Protection Agency, and the fast-food executive Andrew F. Puzder for labor secretary should be seen."

But there is no explanation as to how any of these men will create jobs, or indeed anything at all about jobs beyond Trump's claim to be focusing on them. Considering how that worked out with Carrier, who took $7 million from taxpayers and still shipped 1,300 jobs to Mexico, his promises do not bode well.

Instead of accurately reporting on how Trump's cabinet picks largely lack any qualifications, and are clearly intended to help him break the government, the New York Times — the supposed "paper of record" — has given Trump a pair of positive headlines about job creation that he simply has not earned and that their own reporting does not support.