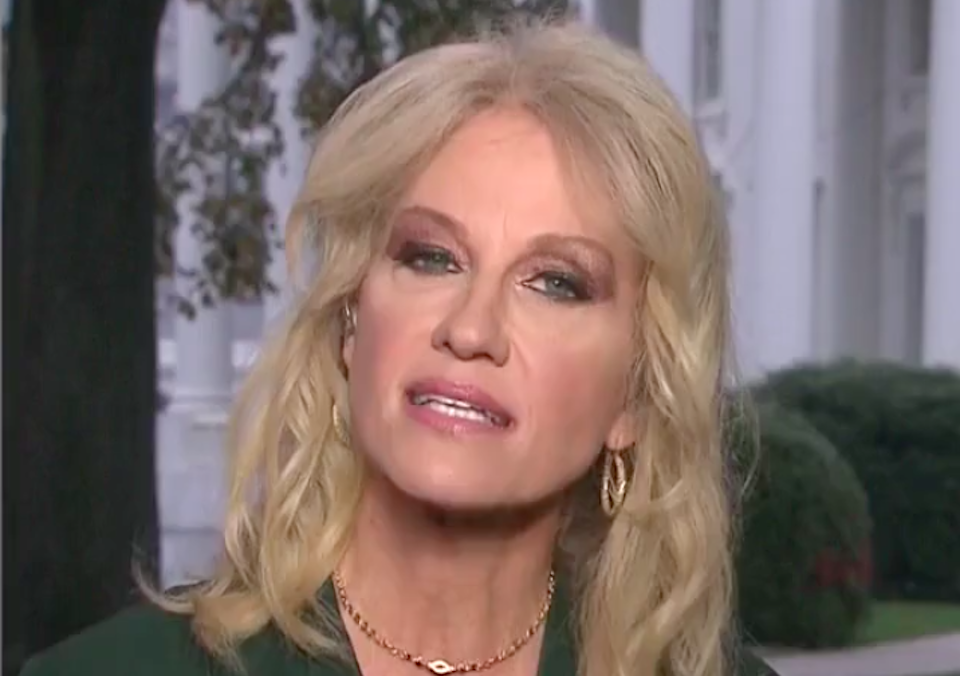 On CNN, host Brian Stelter didn't let Kellyanne Conway get away with her transparent attempt to pivot from the real story about Russia to the Trump administration's fixation on Hillary Clinton.

As special counsel Robert Mueller's investigation reaches Donald Trump's inner circle, those closest to him are growing increasingly desperate to avoid the topic of Russia altogether.

This was what White House senior adviser Kellyanne Conway was surely hoping to do Sunday morning when she appeared on CNN's Reliable Sources. Unfortunately for her, throwing shiny objects at the camera only works on Fox News.

In a wide-ranging interview, host Brian Stelter called out Conway for spreading misinformation about the Russia dossier, refusing to acknowledge the credibility crisis in the White House, and expecting the press to act like "state-run media."

The most fiery exchange took place when Stelter pressed Conway on Mueller's ongoing Russia investigation. Instead of responding to Stelter's questions, Conway tried to change the subject to — what else — Hillary Clinton.

"As the campaign manager for the winning part of the campaign, I never a single time even thought about what to do — how to deal with Russians to win," Conway said.

She continued, saying Clinton was such a bad candidate that the campaign didn't have to consider accepting help from Russia — implying, unintentionally, that she didn't view the idea of colluding with Russia as fundamentally wrong.

Stelter wasn't having it, though.

"I think viewers see what you're doing — pivoting, " Stelter said. "When I say Russia, you say Clinton. It's part of the strategy."

When Conway tried again to dodge the issue of Russia by taking a swipe at Clinton for having the audacity to continue existing in public, Stelter hit back, calling Conway "boring" for constantly using Clinton as her punching bag.

"You love to jab, jab, beat on Hillary Clinton," he said. "It's boring. It's outdated. It's history."

CONWAY: I want to say something else. As the campaign manager for the winning part of the campaign, I never a single time even thought about what to do — how to deal with Russians to win. Hillary Clinton, as Donna Brazile just pointed out, I agree with her completely. She was a walking, talking treasure trove of how to beat Hillary Clinton. We never needed to look further than her. As Donna points out, there was a feeling of inevitability and smugness over in Brooklyn that they didn't have to campaign on the issues, they didn't have to campaign hard. She didn't see the enthusiasm for Hillary Clinton.

STELTER: I think viewers see what you're doing, pivoting. When I say Russia, you say Clinton. It's part of the strategy.

CONWAY: Sorry, I'd be happy to never talk about the 2016 election again. You know why? We won it.

STELTER: Let's agree not to talk about it during this interview.

STELTER: You love to jab, jab, beat on Hillary Clinton. It's boring. It's outdated. It's history.

Despite Conway's claims that she would "love" to stop talking about the 2016 campaign, she continues to bring it up on a laughably consistent basis. She also seems to take great pleasure from tearing down Clinton and scrutinizing her every move, which says far more about Conway than Clinton.

Using Clinton as a shiny object to distract from the Russia probe has become standard practice for the Trump White House.

After special counsel Mueller issued his first indictments Monday, Trump rushed to Twitter to claim Clinton is the real issue that we should be focusing on.

“Sorry, but this is years ago, before Paul Manafort was part of the Trump campaign. But why aren't Crooked Hillary & the Dems the focus?????” Trump tweeted.

He and his allies then spent the next several days incoherently blustering about scandals that don't exist.

Right-wing media outlets like Fox News and Breitbart followed Trump's lead. Rather than covering the indictments of three former Trump associates, they spent the week desperately peddling a debunked story about Clinton selling uranium to Russia.

Trump, meanwhile, just can't seem to let the election ago. From his obsessive Twitter tirades about Clinton to his demands that the Justice Department and FBI investigate his former political opponent, it's obvious that losing the popular vote is still eating away at him.

Nearly a year after the election, Trump and his apologists still haven't figured out that yelling "HILLARY!" won't magically make their troubles go away. Clinton, meanwhile, has gotten an entire year of free rent living in their heads.