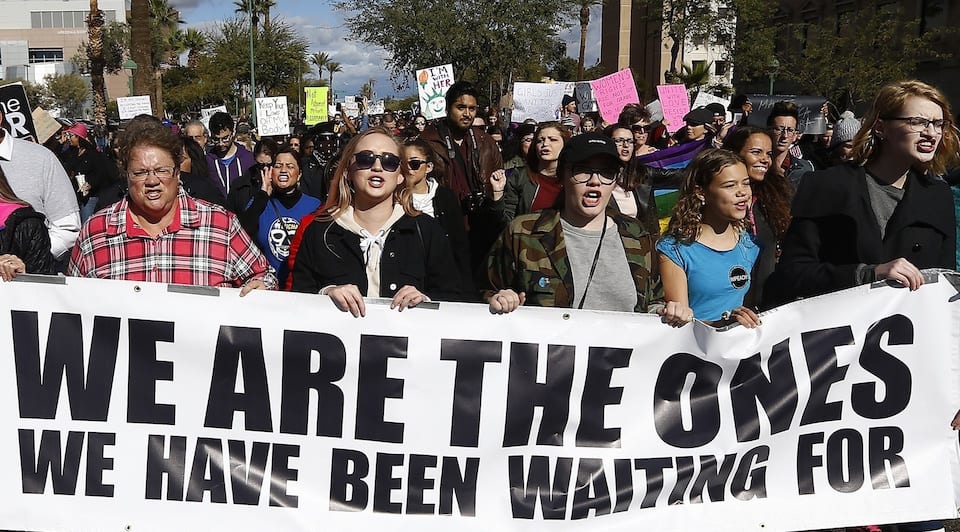 Also this week, South Carolina and California score voting rights victories, and hundreds of goats take over the streets in a California town.

Women run for the House in record numbers

As of Tuesday, 490 women had filed paperwork to run for the House of Representatives, breaking 2018's record of 476 female candidates, the Center for American Women and Politics at Rutgers University reported.

"This is a sign that the momentum isn't letting up," Debbie Walsh, the center's director, said in a press release, adding that this year's number appears to confirm "the emergence of a new normal" that began in 2018.

Democratic voters in the last round of midterms elected a record number of women to Congress, even as the number of Republican women in the House dropped from 23 to 13.

South Carolinians can vote by mail in June primary

South Carolina voters do not have to provide a reason to request an absentee ballot for the state's June 9 primary as a result of legislation passed by both chambers of the State House and signed by South Carolina's Republican governor, Henry McMaster.

Several Democratic groups had argued for no-excuse absentee voting before the state Supreme Court. The new law will apply only to the June primary, and will expire on July 1.

South Carolina voters "will [no longer] be forced to choose between putting their and their families' health at risk and casting their ballot this June," Rep. Cheri Bustos, chair of the Democratic Congressional Campaign Committee, said in a statement released Wednesday.

Every California voter will be mailed a ballot

Democratic California Gov. Gavin Newsom announced on May 8 that every registered voter in the state would be mailed an absentee ballot for November's general election.

"Elections and the right to vote are foundational to our democracy," Newsom said. "No Californian should be forced to risk their health in order to exercise their right to vote."

California will provide limited in-person voting options for those who are not able to vote by mail.

On May 8, Pennsylvania became the third state in the nation to outlaw child marriage. From now on, no one under the age of 18 will be able to obtain a marriage license in the state.

"Setting the minimum age to obtain a marriage license will help prevent child exploitation," Democratic Gov. Tom Wolf said in a statement. "Marriage is a sacred and serious commitment that should be undertaken with love by two adults, not by children being exploited by unscrupulous adults."

Minnesota is poised to become the fourth state to ban child marriage later this summer. Delaware and New Jersey already prohibit the practice.

Led by Sen. Kamala Harris of California and Reps. Jim Clyburn of South Carolina and Marcia Fudge of Ohio, Democrats introduced a wide-ranging voting rights bill in Congress on Tuesday.

The VoteSafe Act would require all states to allow no-excuse absentee ballots and 20 days of early voting, and would provide funding to states to improve voter registration and ensure ballots are accessible to people with disabilities and people who do not speak English.

"While the health and safety of voters is a top priority during the current public health emergency, we must make sure the pandemic does not impede full, unfettered access to the ballot box," Fudge said.

Children in Illinois now have access to educational content on All In Illinois, a section of the state tourism website that encourages residents to stay at home during the coronavirus crisis.

"Our goal is to provide fun and educational activities for children to engage with as we continue to be 'all in' and stay home to support each other through this challenging time," Gov. JB Pritzker said. "This content series also offers a taste of a variety of family-friendly experiences that will be available to them, once it's safe to visit."

Illinois museums and attractions such as the Field Museum and the Shedd Aquarium, both in Chicago, are providing content for the website.

On Tuesday, more than 200 goats were caught on video roaming through a San Jose neighborhood after they broke through a fence, KQED reported.

Twitter user Zach Roelands posted the video that has been viewed millions of times.

"This is the craziest thing to happen all quarantine," he wrote.

This is the craziest thing to happen all quarantine 🐐🐐🐐 pic.twitter.com/Hc7XpuiBdT

KQED reported that a rancher eventually rounded up the goats and brought them home.