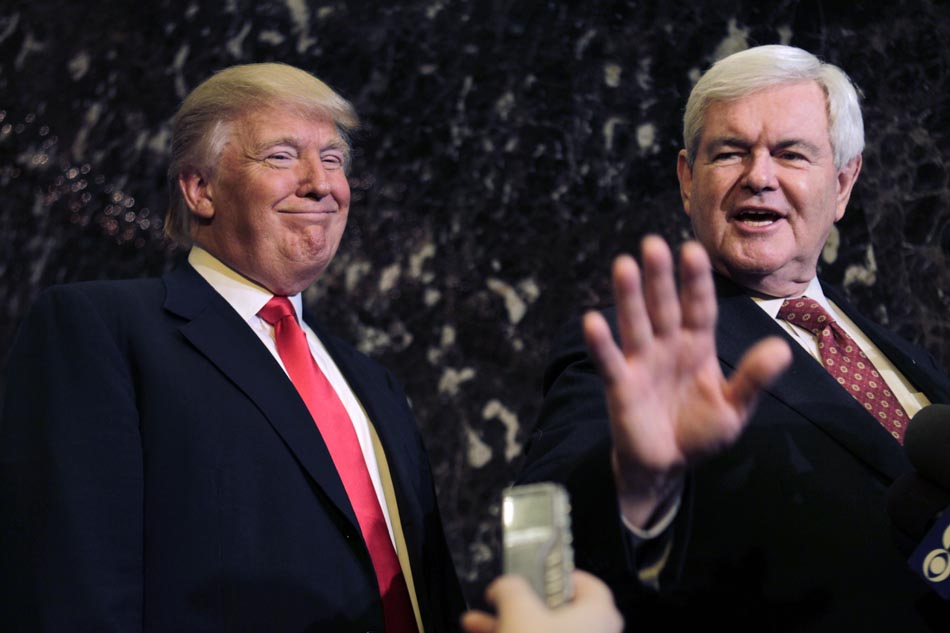 To listen to his surrogates and supporters tell it, 70-year-old Donald Trump is the oldest little boy in the world.

During an interview with the Washington Examiner, Newt Gingrich ― who was once in contention to be Donald Trump's running mate ― explained that there are two Trumps: Big Trump and Little Trump.

Big Trump, says Gingrich, is "a historic figure talking about historic ideas." Little Trump, on the other hand, is "very sensitive, particularly to anything which attacks his own sense of integrity or his own sense of respectability, and he reacts very intensely, almost uncontrollably, to those kinds of situations."

Little Trump has behaved in "frankly pathetic" ways, he said. “I hope he grows out of it.”

I hope he grows out of it is something a person says about an 8-year-old, not a 70-year-old man who is running for president of the United States, with three weeks to go until the election.

That Trump is an ill-behaved little boy who, gosh darn it, just has some growing up to do is a recurrent theme: His wife Melania described him as one of the "two boys" she has at home.

Melania Trump: "Sometimes I say I have two boys at home: I have my young son, and I have my husband."

And then there is the ubiquitous "locker room talk" defense of Trump's egregious comments about assaulting women: Boys will be boys.

There is nothing charming about an adult man who imagines or acts like he is still a boy. Especially not a man who is petitioning for the nation's highest office.

And since the best the Republicans had to offer is a boy, it is a good thing the Democrats nominated a woman.