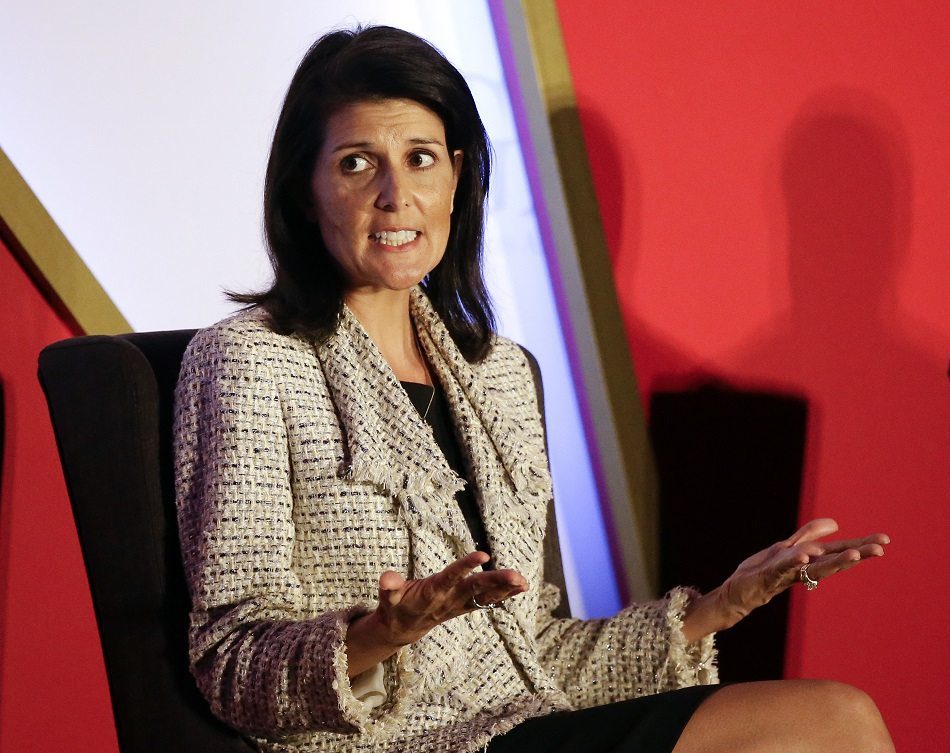 Nikki Haley. (AP Photo/John Raoux)
Get The American Independent in your inbox

The former South Carolina governor, who looks to be eyeing a 2024 presidential bid, has tried to have it both ways with the twice impeached leader of the GOP.

Nikki Haley appears to be trying to erase her previous support of Donald Trump as she moves toward a run for president in 2024.

On Wednesday, Haley announced she's launching a political action committee to help Republicans in the 2022 midterm elections. It's a step many presidential hopefuls take to build allies within the party ahead of a run.

But the PAC's website includes no mentions nor photos of Trump — even though Haley served in his administration as ambassador to the United Nations for nearly two years.

Haley has waffled on her support of Trump for years.

She slammed Trump in her 2015 rebuttal to then-President Barack Obama's state of the union address, saying, "Some people think that you have to be the loudest voice in the room to make a difference. That is just not true. Often, the best thing we can do is turn down the volume."

In an interview with NBC's "Today" show after that speech, she admitted she was speaking about Trump in her response, saying, "Mr. Trump has definitely contributed to what I think is just irresponsible talk."

During the 2016 election, she criticized Trump and endorsed Sen. Marco Rubio (R-FL) in his failed primary campaign.

While campaigning for Rubio, she also condemned Trump for not disavowing the KKK, saying "I will not stop until we fight a man that chooses not to disavow the KKK. That is not a part of our party. That's not who we want as president. We will not allow that in our country!"

But then, once Trump won, Haley came around, joining the Trump administration and defending Trump's behavior.

In 2019, when Democrats were moving to impeach Trump the first time around, she said in another "Today" show interview that Trump is "truthful" — an eye-popping remark given the sheer number of provable lies Trump made over the years.

"I talked to him multiple times, and when I had issues, he always heard me out," Haley said in the interview, which was meant to promote her new book — yet another step presidential hopefuls often take. "I never had any concern on whether he could handle the job ever."

Now, after the violent attacks on the U.S. Capitol that Trump incited, which led to his second impeachment, Haley is back to criticizing her former boss.

At the Republican National Committee's winter meeting on Jan. 7, the day after the attack on the Capitol, Politico reported that Haley spoke out against Trump.

"President Trump has not always chosen the right words," Haley said, according to Politico. "He was wrong with his words in Charlottesville, and I told him so at the time. He was badly wrong with his words yesterday. And it wasn't just his words. His actions since Election Day will be judged harshly by history."

Haley's on-again-off-again relationship with Trump shows just how hard it will be for Republican presidential hopefuls in 2024 to handle the soon-to-be-former commander in chief.

While support for Trump among Republican voters has fallen since the events at the Capitol, it still remains high.

A Quinnipiac poll released on Monday found 71% of Republicans still approve of the job Trump is doing. That's an 18% drop from Quinnipiac's December poll, yet still strong.

Haley's spokesperson also denied to Axios that she's trying to erase her past support of Trump, given that he does not appear on her PAC's website.

"There's nothing to read into that," Chaney Denton, Haley's spokesperson, told Axios. "Amb. Haley frequently and proudly mentions her work alongside President Trump in speeches and writings. The purpose of SFA PAC is to support Republicans in the 2022 midterm elections."