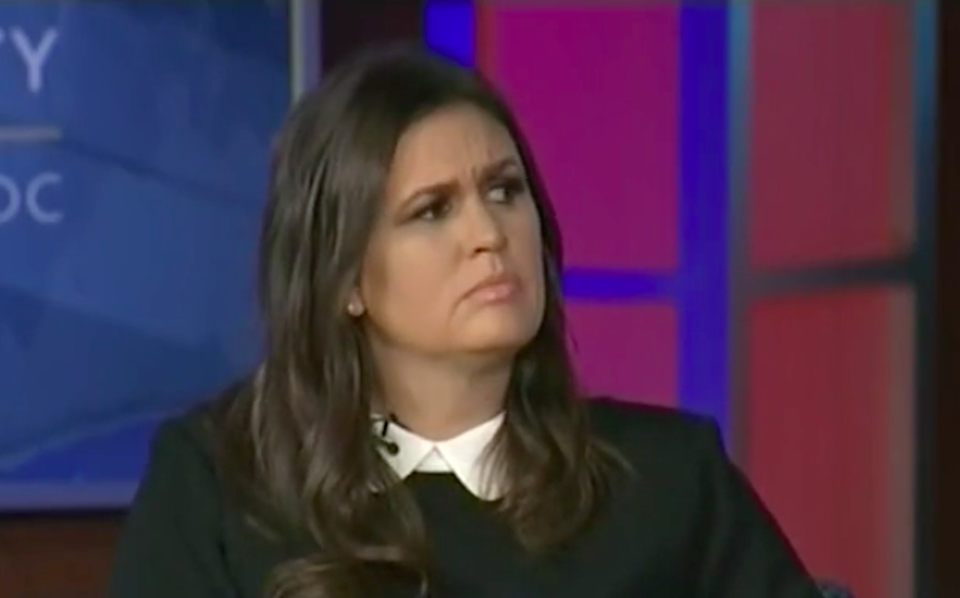 Press secretary Sarah Huckabee Sanders offered another bizarre defense of John Kelly's lies, essentially claiming that his "heartfelt" account was so emotional that it must be true.

The Trump administration just cannot admit that chief of staff John Kelly was caught in a bald-faced lie.

Kelly's defamatory swipe at Democratic Rep. Frederica Wilson has been proven to be utterly baseless — by video and local press, and officially confirmed as a lie by PolitiFact.

Kelly has thus far refused to apologize, despite multiple calls to do so. And not only has the White House continued its attacks on Wilson and on the Gold Star family for whom she spoke up, drawing the ire of Donald Trump and his team — they've also continued to insist, despite all evidence to the contrary, that Kelly didn't actually lie at all.

Press secretary Sarah Huckabee Sanders came to the immediate defense of Kelly's lie that Wilson had publicly bragged about securing funding for a new FBI building dedicated to the memory of two slain agents, and sought to promote herself while speaking at the solemn ceremony.

Sanders insisted that Kelly's account of Wilson's speech was correct, and implied that it was "highly inappropriate" for reporters to even question him about it, because he's a "four-star Marine general."

And even after all of the proof has come to light, Sanders is still covering for Kelly, this time by claiming that he didn't really lie because he said what he felt.

Speaking at a panel with journalists hosted by George Washington University, Sanders actually said that Kelly's emotions and feelings mean whatever he said wasn't a lie.

And when reporter April Ryan asked Sanders if there would be an apology forthcoming from Kelly, she offered an emphatic 'no.'

"I don't think General Kelly was wrong, and therefore I don't think he should offer an apology," Sanders replied. And when Ryan asked where Kelly got his information, Sanders rambled about the different "accounts" of the day in question.

"He was there," she stated. "And you have two different accounts, and I think General Kelly gave one of the most heartfelt, raw, and emotional accounts that anyone could give."

Sanders also tried to use Kelly's credibility from his long career in service to claim he can't be doubted, and again insisted that she believes his lies because of feelings.

"I support him in his account of that interaction and what he saw and what he felt," she continued.

That's not how facts work, though.

A story being "heartfelt" and "emotional" does not mean it cannot also be untrue.

And there are not "two different accounts" in this scenario: there is Kelly's story, and there are the multiple sources of proof that his story is, in fact, a lie.

If the White House had simply encouraged Kelly to offer a mea culpa immediately, and to apologize for his error and for attacking Wilson's character, the whole story would have ended days ago.

Instead, caught in a nasty lie, Kelly and the Trump team are digging their heels in deeper, daring to ask the nation: Who are you going to believe — us or your lying eyes?