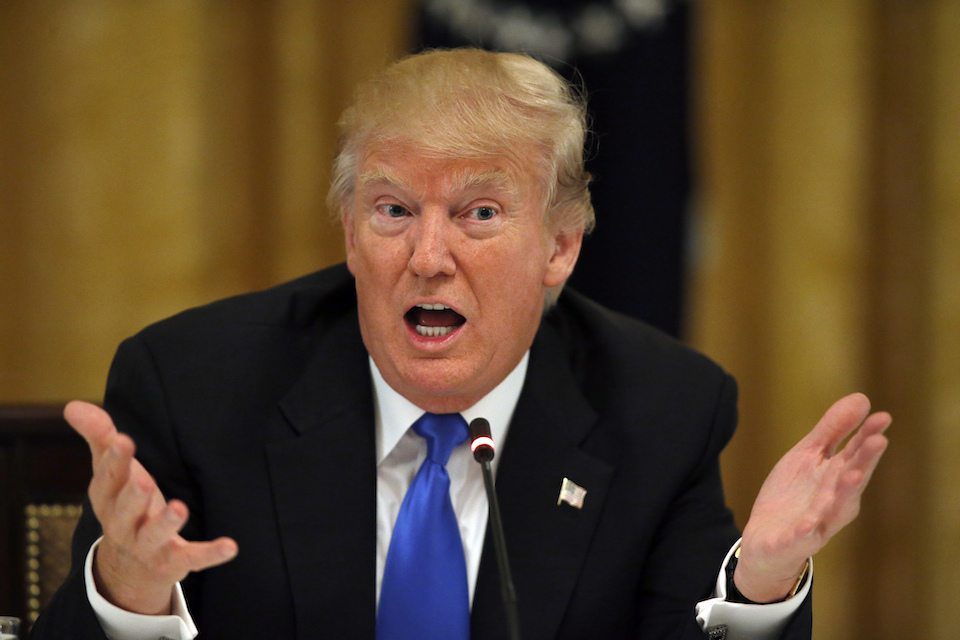 In a new interview, Donald Trump says that health insurance costs "$12 a year" and reveals he does not even understand the health care system he is trying to destroy.

Ever since the defeat of the Senate's Obamacare repeal bill, Donald Trump has been erratically flip-flopping between saying he will just sabotage Obamacare, demanding Republicans take up full repeal, and threatening Republican senators.

It is clear that Trump does not have any kind of strategy. Furthermore, he may never have had one. He seems to not understand what health insurance even is.

In Trump's new interview with the New York Times, Maggie Haberman raised the issue of guaranteeing coverage for people with pre-existing conditions, a protection Republicans promised they would keep before immediately trying to destroy it.

Haberman remarked on the political difficulty of ending such a popular provision of health care law once it is already been effect. This was Trump's response:

HABERMAN: That's been the thing for four years. When you win an entitlement, you can't take it back.

TRUMP: But what it does, Maggie, it means it gets tougher and tougher. Because politically, you can't give it away. So pre-existing conditions are a tough deal. Because you are basically saying from the moment of the insurance, you're 21 years old, you start working and you're paying $12 a year for insurance, and by the time you're 70, you get a nice plan. Here's something where you walk up and say, "I want my insurance." It's a very tough deal, but it is something that we're doing a good job of.

In this mind-boggling word salad, Trump's reference to "$12 a year" insurance reveals that he still has absolutely no idea how health coverage works. Unfortunately, none of the three New York Times reporters asked a single follow-up question about Trump's plainly wrong statement.

That number is not even close to the cost of any health plan with essential benefits. The average cost of insurance varies from state to state, but last year, there was no state in which it was less than $180 per month.

Since Trump referenced "work," he might have been thinking of group policies offered by employers. But that would still be wrong. Last year, the average cost per worker for employer policies, in employer and employee contributions, was $521 per month.

Some low-income people might effectively be paying $12 per year, or nothing at all, for Obamacare insurance plans if they qualify for federal subsidies. But since Trump has repeatedly threatened to cut off some of those subsidies, he can hardly claim to be doing a "good job" on that.

This is not the first time Trump has issued a wild and wildly inaccurate guess at how much health insurance costs. In May, Trump made a similar statement about young people working until age 70 and paying "$15 a month for the rest of your life."

It is obvious that Trump dived into the Republican health care repeal effort without knowing the faintest thing about insurance markets or the financial difficulty many people have in obtaining good coverage for themselves and their families — and that he has walked away from his failure having learned nothing.

The American people need a president who approaches public policy with knowledge and a willingness to listen. Trump has proven time and again that he cannot do this, and his health care farce brings this shortcoming into sharp relief.