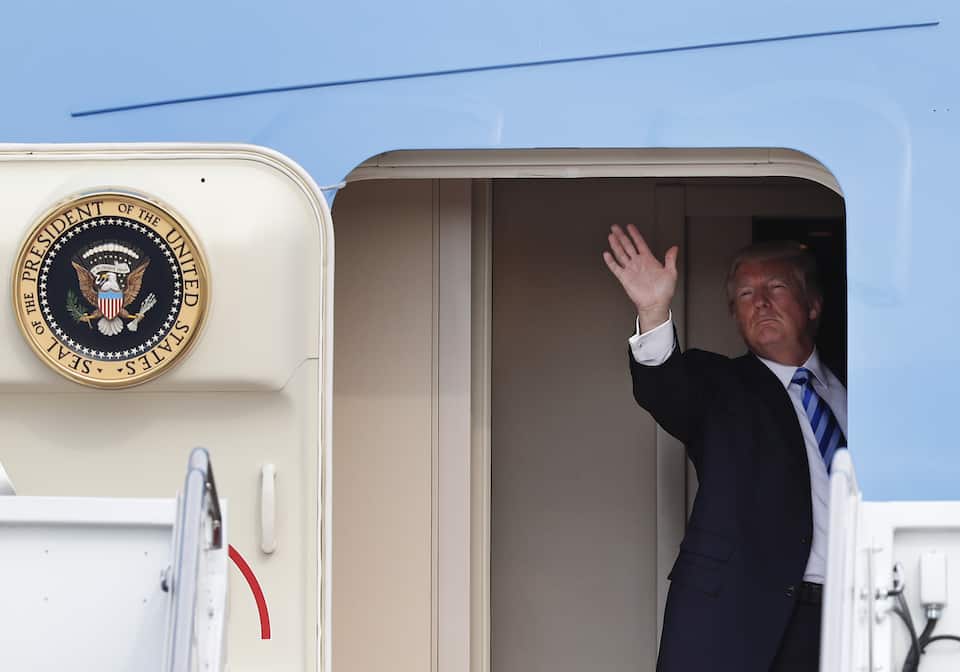 Donald Trump will soon start taking weekend vacations at his resort in New Jersey, bringing the financial hardships he has inflicted on Florida residents to a second state.

Donald Trump is apparently not satisfied using his presidency as an advertisement for his Mar-a-Lago resort, where he has spent the bulk of his weekends. Now, he is about to take his entourage — and all the financial disruption it represents to local communities — to his golf club in Bedminster, New Jersey.

Politico reports that Trump "is expected to shift his weekend plans north, to his Trump National Golf Club in Bedminster, New Jersey." Trump has a personal connection to the club, at one point claiming that he wanted to be buried there. It was also the site of Ivanka Trump and Jared Kushner's wedding.

Residents and businesses in the area are already gearing up to face the same kind of mess that for months has plagued Palm Beach residents, the cost and disruptions of which have those Florida residents considering a tax that would apply only to Trump in order to cover the considerable expenses they have incurred.

Sheriff Ric Bradshaw had estimated that the costs of Trump’s visits to Palm Beach County, up until mid-February, ran to $1.4 million. Another estimate from the Palm Beach Sheriff’s Office said Trump’s three trips in February and one in early March had cost $570,000, not including overtime for police officials.

And according to Politico, "Trump’s three-day trip to Bedminster last November as president-elect cost $3,683 in local police overtime, for example, and the town’s mayor, Steve Parker, estimated in a letter to New Jersey GOP Rep. Leonard Lance that seven 72-hour Trump visits could run the tab up to more than $300,000."

When Trump operated out of Bedminster during the transition period, he forced the closure of the Lincoln Tunnel, in addition to other disruptions to the area. And Lorne Sheren, the senior aviation medical examiner at one of three private airports in the area, told Politico that Trump flying in will be "bad for Somerset" county because it "shuts us down when he's there." Officials in Florida recently highlighted the costs that Trump has incurred by flying into airports there, including forcing business to other airports in the region due to Secret Service flight restrictions.

Bedminster officials have already asked the Department of Justice to be repaid for state and local law enforcement overtime during the transition period, and considerably more will be incurred as Trump uses his Bedminster trips for photo ops that advertise his property at taxpayer expense.

Residents voiced concerns at a town hall in March over rumors circulating that taxes could go up to offset the costs of Trump's visits, and one woman pointed out that Palm Beach, which is more affluent, has still faced problems — problems which could have an even bigger impact in New Jersey.

Traveling out of Washington is not unusual for a president, but using the office to promote your personal properties while repeatedly incurring massive expenses for local government, is not normal, and not acceptable.

Trump is again putting himself and corruption first, while regular Americans foot the bill.