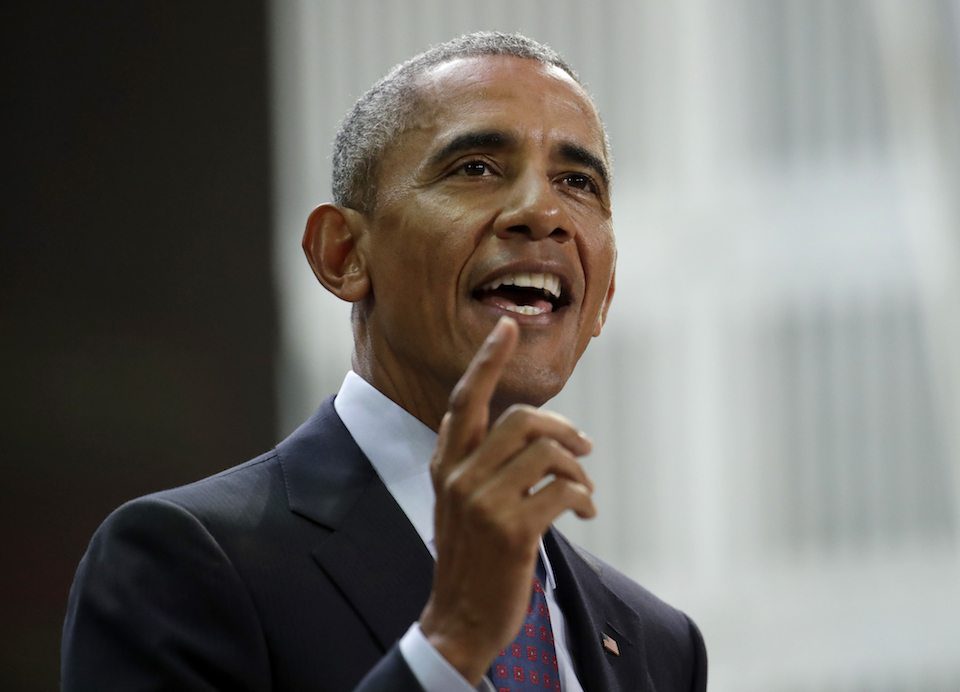 The GOP's latest health care bill would be a massive disaster for the country. And while Donald Trump is blatantly ignoring those who would suffer under it, President Barack Obama offered words of hope and wisdom to all Americans.

The Republican Party is like a dog with a bone, except the bone happens to be the health and welfare of millions of Americans.

The latest attempt to rollback Obamacare manages to be far more cruel and more devastating to the fabric of the nation than its precedents.

As Democratic Sen. Chris Murphy of Connecticut put it bluntly, the Graham-Cassidy bill is "an intellectual and moral garbage truck fire," one that "hurts millions, makes every problem in the health care system worse not better."

That's not hyperbole — a new analysis of the plan from the Commonwealth Fund shows that it could leave 15 to 18 million more people uninsured by 2019, a number which increases to 32 million after 2026. The analysis also shows that the bill's repeal of the Obamacare mandate would lead to a 15 to 20 percent increase in premiums within just the first year of implementation.

And another study shows that by 2036, Graham-Cassidy would cut federal health care funding to states by $4 trillion — yes, trillion.

It is thus predictable, though still reprehensible, that the GOP would do its best to pass the bill in secret, and to put on sham hearings and spend merely two minutes in debate, rather than actually listen to the people impacted by their horrible plan.

The party is taking cruel notes from their leader, after all: rather than engage with a cancer patient about her concerns over the Graham-Cassidy bill, Donald Trump actually blocked her on Twitter.

Laura Packard, a woman with stage 4 Hodgkin's Lymphoma, had regularly tweeted at Trump about the dangers of health care repeal. After she called him out for supporting the bill, which she said would "put America last," she discovered Trump had blocked her from his personal account.

But while Trump and the GOP are eagerly working to inflict untold harm on millions of people, and studiously avoiding actually confronting any of those people, President Barack Obama offered characteristic words of hope and wisdom at a time when many may be feeling demoralized or helpless.

Speaking at the Goalkeepers event hosted by the Bill and Melinda Gates Foundation, Obama recalled tireless efforts by activists from all walks of life to improve the lives and livelihoods of everyone around them.

"They knew that, at every step of the way, they would not get everything they wanted as fast as they wanted," he said. "They knew that progress required struggle and perseverance and discipline and faith. They knew that sometimes for every two steps forward, you'll take a step back."

But no one involved in the fight to pass the Affordable Care Act let that stop them.

"Against all odds, they made a difference," Obama noted, and because of that, "people are alive today ... That's progress."

Graham-Cassidy is just the latest assault — "the 50th or 60th time," Obama noted the GOP has tried to roll back protections for vulnerable Americans: "The cancer survivor, the expecting mother, the child with autism or asthma, for whom coverage once again would be almost unattainable."

"It is aggravating," Obama noted. "And all of this being done without any demonstrable economic or actuarial or plain common sense rationale — it frustrates. And it's certainly frustrating to have to mobilize every couple of months to keep our leaders from inflicting real human suffering on our constituents."

To younger folks who may be experiencing the difficult of confronting such a challenge for the first time, Obama explained that "that's the test — the test is not how do you feel when things are going good ... the test is when you're in the field and you're on the ground and you are doing work and people are resisting, or misunderstanding, or purposely undermining efforts that you know can make a difference."

What should the response be in that situation? "To reject cynicism and reject pessimism, and push forward with a certain infectious and relentless optimism."

"Not blind optimism," he notes. "Not one that ignores the scale and the scope of challenges. But that hard-earned optimism that's rooted in the stories of very real progress that have occurred throughout human history."

The Republican Party has made it clear how little they care about what the future would look like for the vast majority of the country, should Obamacare be repealed and something as harmful and draconian as Graham-Cassidy be implemented in its stead.

Indeed, they will even admit out loud that the whole basis for the repeal crusade is nothing more than callous, self-serving political gain.

So listen to what they say and believe them — but listen also to what President Obama says, and believe him when he reminds us of the power we all have to fight back.

"Relentless optimism" has worked time and again in the recent and distant past. It can work again now and in the future.