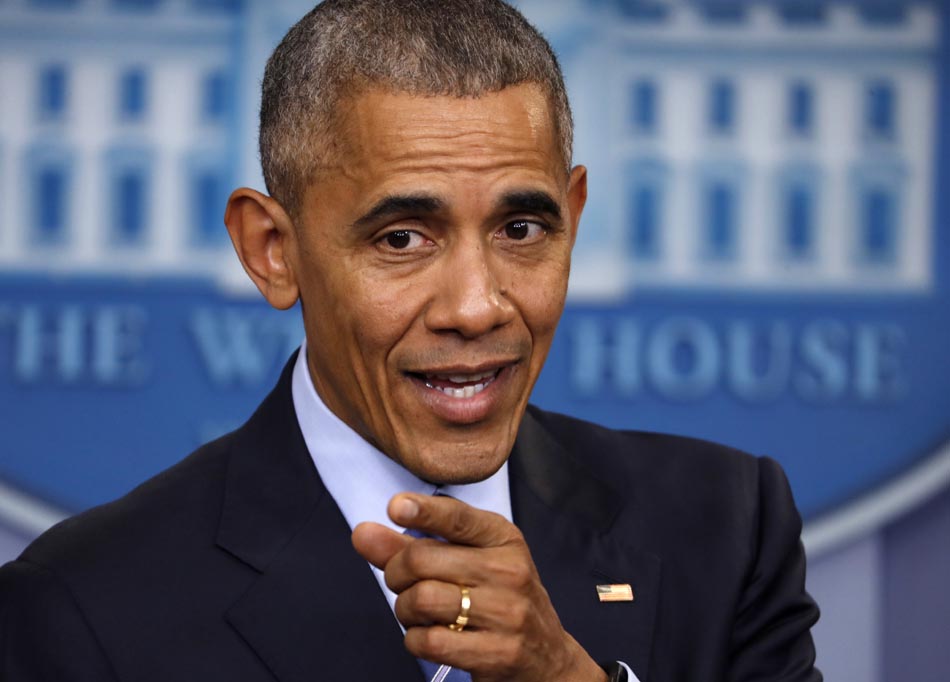 In his last press conference of the year, President Obama addressed Russian hacking, reiterating his promise to take action against Russia, some seen and some unseen. He also had some stern words for the press, for their role in giving the Russians a vehicle to impact the election, via their "obsession" with minutiae at the expense of policy in a crucially important election.

President Obama just gave his final press conference of the year, the entirety of which can be viewed here. In his typically unflappable and measured demeanor, he started by recounting many of the successes of his eight years in office, then took questions, many of which focused on Russian interference in the election.

Obama reiterated his promise to take action against Russia, some of which "may be explicit and publicized; some of it may not be," defended his administration's response to the hacking, and had strong words for a press which has been remarkably unreflective about the role they played in abetting Russia's attempts to sway the election to Donald Trump's favor.

And, the truth is, is that there was nobody here who didn't have some sense of what kind of effect [hacking and leaking DNC emails] might have. I'm finding it a little curious that everybody's suddenly acting surprised that this looked like it was disadvantaging Hillary Clinton, 'cause you guys wrote about it every day! Every single leak. About every little juicy tidbit of political gossip. Including John Podesta's risotto recipe.

This was an obsession. That dominated the news coverage. So, I do think it's worth us reflecting how it is that a presidential election of such importance, of such a moment, with so many big issues at stake, and such a contrast between the candidates, came to be dominated by a bunch of these leaks.

The President is, of course, exactly right. The Russian hacking and subsequent leaking could not have had an impact if the media had collectively decided that the source of the material mattered. It was an editorial decision to overlook the source and participate in the dissemination of emails selectively hacked and made public to damage only one candidate in a close election. And it was a bad decision. A history-making decision.

Especially because, as my colleague T.R. Ramachandran has observed, there was precious little effort made to draw clear distinctions between Hillary Clinton's State emails and the leaked DNC emails. Both stories got mashed up into one big ball of EMAILS, and the fact that the latter were only known to the public because of hacking personally directed by Russian President Vladimir Putin, but were completely divorced from that context, handily served his disruptive ends.

Obama had words for Republicans, too, and their astounding, unpatriotic indifference to addressing this present threat to national security — which accompanies an uptick in support for Putin among their base.

And then, after the elections, suddenly they're asking, "Well, why didn't you tell us that maybe the Russians were trying to help our candidate?" Come on. There was a survey, some of you saw, where — now this is just one poll, but a pretty credible source — thirty-seven percent of Republican voters approve of Putin.

Over a third of Republican voters approve of Vladimir Putin, the former head of the KGB. Ronald Reagan would roll over in his grave.

Again, the President is entirely correct. The only operative Republican principle anymore is obstruction. If it helps Democrats and/or Obama, oppose it. If it hurts Democrats and/or Obama, support it. And this extreme, reflexive partisanship, without regard for consequences other than winning, has resulted in increased support for a foreign authoritarian dictator, even as he orchestrates the subversion of our democratic institutions.

This was an incredibly important message to hear from our President in this moment. Unfortunately, Republicans are not listening, though they are the ones who most need to hear it.