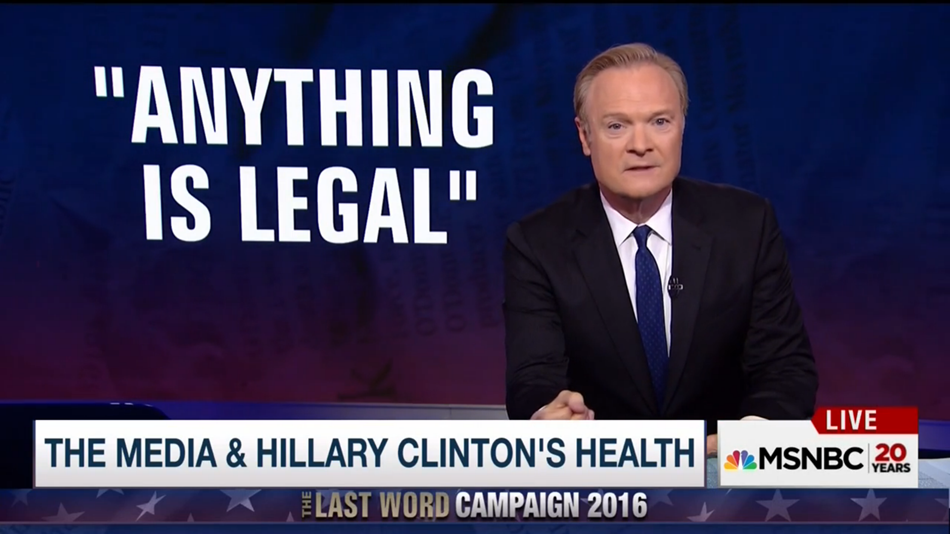 If you're wondering whether national media coverage of the 2016 race has gone off the deep end, you'll need to see this brilliant segment from MSNBC's Lawrence O'Donnell: Political media loses its mind over Clinton.

I've been covering the grossly imbalanced coverage of Hillary Clinton and Donald Trump for the duration of the 2016 campaign. The double standard against Clinton has reached new lows and the frenzy to take her down is at a fever pitch. I tried to capture it all in a recent piece titled R.I.P. Political Journalism (1440-2016).

In July of 2015, reporter Jonathan Allen famously defined the Clinton Rules: "The Clinton rules are driven by reporters' and editors' desire to score the ultimate prize in contemporary journalism: the scoop that brings down Hillary Clinton and her family's political empire." Independent studies have reinforced Allen's observation, concluding Clinton has received the most negative coverage of any candidate in the 2016 election.

This chart is from a Harvard analysis of 2016 reporting: A candidate who wallows in bigotry, who incites violence, who verbally abuses his critics, who is a self-avowed threat to the free press, who trashes U.S. generals while praising Vladimir Putin, who demeans Gold Star families, gets less negative coverage than his opponent, a lifelong public servant who is one of the most accomplished and admired women on the planet.

It is an unfathomable reality.

Now, Lawrence O'Donnell channels the outrage of people across America, with a righteous rant that lays out the case against the corporate political media.

O'Donnell isn't alone. CNN's Christiane Amanpour has her own version:

Can't a girl have a sick day or two? https://t.co/KlilMdU8GP

The 2016 campaign is in its closing weeks, and the corporate media are redoubling their efforts to tip the scales in Trump's favor. It is encouraging to see that some journalists refuse to go along.