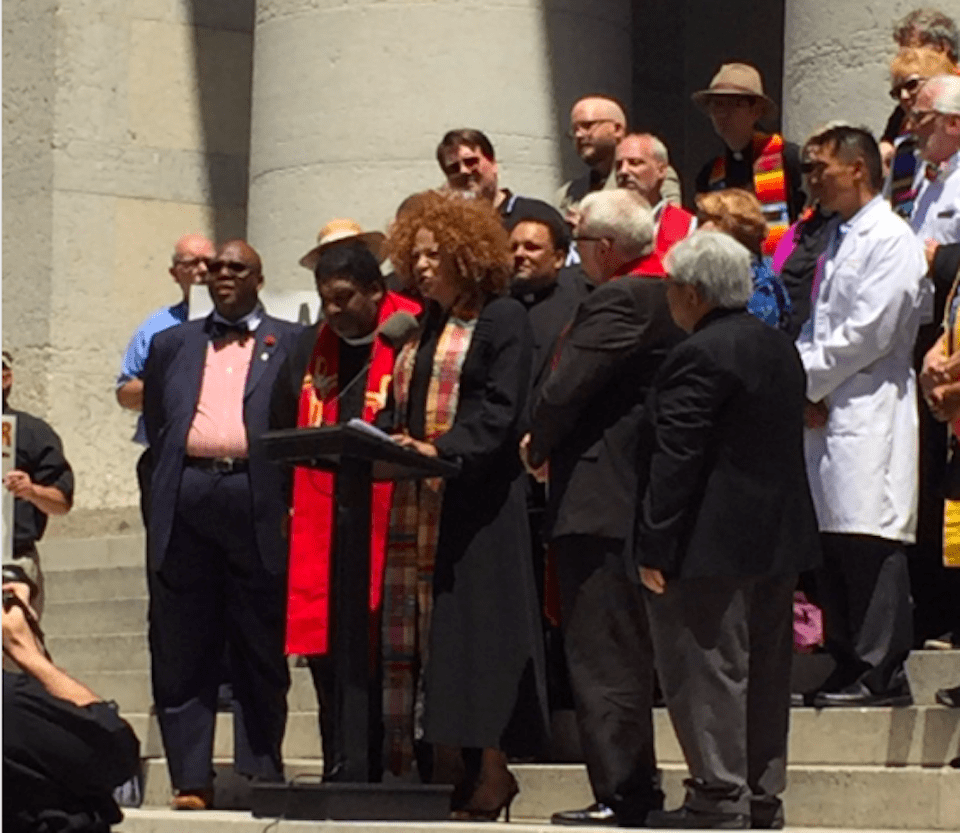 Faith In Public Life
Get The American Independent in your inbox

Rev. Dr. Susan K. Smith is annoyed. She's frustrated with politicians who talk about God and morality, yet back "policies that support immorality." Her message to Republican Senator Rob Portman is clear: Oppose the immoral health care repeal.

Hundreds of Ohio clergy gathered on the steps of the Capitol in Columbus, Ohio to speak truth to power.

One after another, they called on Republican Senator Rob Portman, who says he opposes the House bill but still supports repealing Obamacare, to reject repeal and to protect health care for millions of Americans.

Rev. William Barber, founder of the "Moral Mondays" movement, called on Portman to "renounce and stand against the meanness, the lies and the con-artistry tactics of Paul Ryan and Donald Trump."

Rev. Tim Ahrens of First Church in Columbus, spoke to the life or death stakes of the policy at hand, saying "The bottom line is – people will die because of this legislation.”

Bishop Tony Minor, Pastor, of the Community of Faith Assembly, asked Portman "to not yield to partisan politics."

"We talk about God all the time and yet we immerse ourselves in policies that support immorality," she explained.

"This health care act repeal is immoral, wrong, irreligious, cruel, unkind, it is not what would make God smile. What the federal government is doing needs to be cried out against by every single one of us."

Smith went on describe in detail the more than 700,000 Ohioans that have been able to get health care under the Affordable Care Act's Medicaid expansion, noting in particular that they do not fit conservative stereotypes: "43 percent employed, 58 percent were men, 71 percent were white."

But her final plea went straight to Portman, who likes to bill himself a "moderate," but votes in line with Donald Trump more than 97 percent of the time:

REV. DR. SMITH: We are trying to say out loud to Sen. Portman, that enough is enough. You were not elected to worship Donald Trump. You were elected to serve the people of this country, of this state. And we say we will not turn back. We will not let you turn us back. We the people stand for justice, and mercy, and righteousness. We the people are calling you to accountability. We say together, as Rev. Barber says, "Forward together, not one step back."

"You were not elected to worship Donald Trump. You were elected to serve the people of...this state," @cassady2euca says to @senrobportman. pic.twitter.com/OtdYcStVXm

The whole event, organized by Faith in Public Life, is worth watching, but you can catch Smith at minute 50:

The resistance to Donald Trump, his agenda, and those who follow in lockstep grows stronger every day. Voices like Pastor Smith's solidify its moral core.