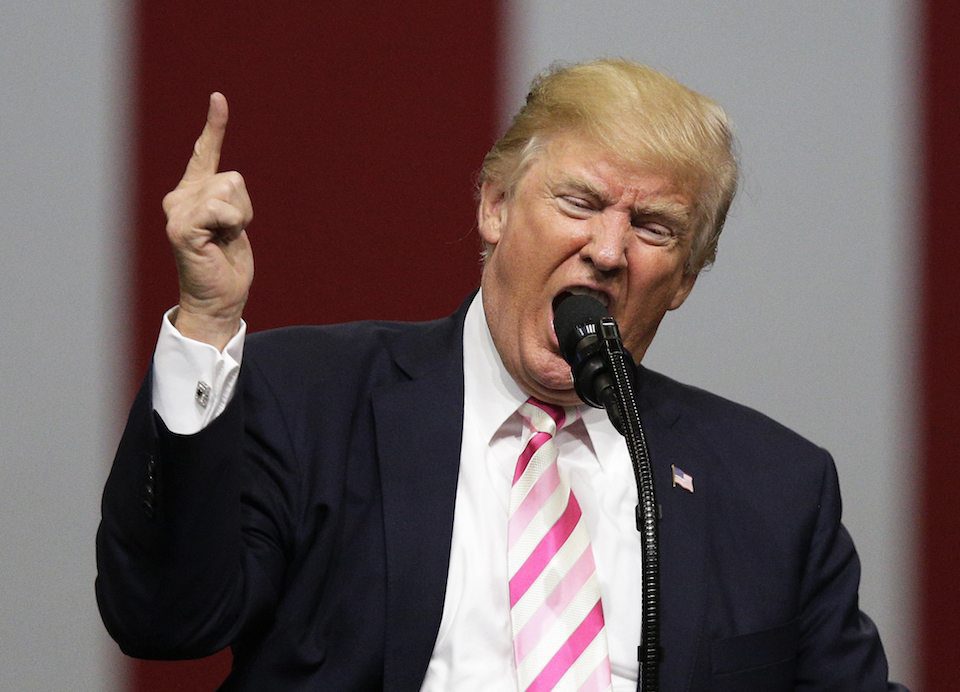 (AP Photo/Brynn Anderson, File)
Get The American Independent in your inbox

Incapable of showing common decency, Trump impugns the integrity of the family of a fallen soldier prepares to bury a son, husband, and father.

Army Sgt. La David Johnson will be laid to rest on Saturday in Hollywood, Florida, more than two weeks after he was killed in an ISIS-led ambush in Niger. He was one of four Army Special Forces troops killed on Oct. 4.

At a time when most commanders in chief would be trying to offer up sympathy and support, Donald Trump and his White House continue to escalate the unseemly, lie-filled smear campaign they’re waging against Johnson’s family.

They’re waging that unprecedented campaign by attacking and denigrating Rep. Frederica Wilson (D-FL), a mentor of Johnson’s and someone who has acted as a family advocate. (She "practically raised" Johnson, Wilson told the Washington Post.) She’s been the person publicly demanding answers about the circumstances of the soldier’s death, and specifically why his body was left behind for 48 hours after the raid.

She’s also the person who told the world that when Trump belatedly did reach out to the Johnson family, he seemed to dismissively suggest that the Green Beret "knew what he was getting into" when he signed up for the military. Trump also seemed to not know Johnson’s name during the call.

By Thursday, the White House smear campaign, being echoed by Fox News, had already produced death threats targeting Wilson. But then the White House doubled down on the vicious attacks.

Just hours after Trump’s chief of staff, John Kelly, personally denigrated Wilson as an "empty barrel" during an appearance at a White House press briefing, Trump jumped on Twitter Thursday night to belittle the Gold Star family advocate with a name-calling post:

The Fake News is going crazy with wacky Congresswoman Wilson(D), who was SECRETLY on a very personal call, and gave a total lie on content!

Both the Kelly and Trump attacks revolve around lies. Contrary to Trump’s tweet, nothing about Wilson’s recounting of his insensitive phone call has been debunked, in part because several other family members heard it and have confirmed it to the press.

“President Trump did disrespect my son and my daughter and also me and my husband,” Cowanda Jones-Johnson told the Washington Post.

The White House has refused to acknowledge Jones-Johnson or her comments about the phone call to her family.

Meanwhile, Kelly based his outrage around the fact that Wilson had overheard the Trump call to Johnson’s widow, Myeshia Johnson, when the call was put on speakerphone, implying Wilson had behaved nefariously when she was simply with the family she has known for decades to provide comfort at such a painful time.

"I was stunned," Kelly angrily announced, suggesting Wilson had breached some sacred bond. But Kelly failed to note that he also overheard the phone call, listening in at the White House.

This is the second unseemly battle the White House has picked with a black Democratic politician in the wake of the deadly raid. Earlier this week, when pressed about his strange, determined silence about the fallen troops, Trump insisted President Barack Obama had also failed to show sympathy for fallen U.S. troops by not reaching out to families. That baseless claim that was immediately, and angrily, debunked by former Obama aides.

Army Sgt. La David Johnson will be laid to rest on Saturday. We can assume neither Trump nor Kelly will be attending.