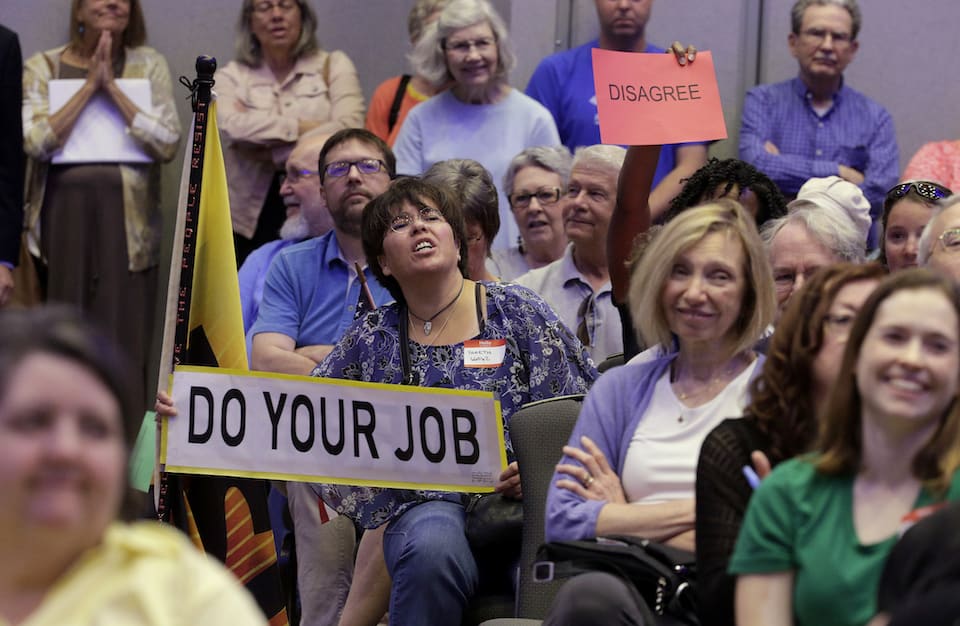 Only two Republican senators have planned to hold town halls during the 4th of July recess, as new polling shows a complete catastrophe for anybody who supports the GOP's health care repeal bill.

Republican senators are hiding from the American people over the 4th of July holiday, with only two of them — Jerry Moran (KS), and Bill Cassidy (LA) — scheduled to hold town hall meetings with constituents before the end of the congressional recess.

The move to cut themselves off from voters comes as the GOP's plan to repeal health care coverage hits a rough patch. Senate Majority Leader Mitch McConnell had hoped to hold a vote before the holiday, but was forced to postpone it as wavering Republicans announced they would withhold their votes allowing it to move forward.

Their reticence is understand — the bill is enormously unpopular. A new poll emphasizes this in stark fashion in battleground states: When support is expressed for the Republican bill, there is a 30 percent increase in unpopularity. The poll also shows an 11 percent lean in favor of Democrats when voters are told about the provisions of the health care bill.

It is no wonder that McConnell has had to resort to what some have called "bribes" in order to induce Republicans to vote for the bill.

Most notable among the bill's toxic, unpopular provisions is the decision to cut over $770 billion from Medicaid, leaving millions of vulnerable people who rely on it out in the cold. This has prompted a groundswell among the disabled and their families, who have been hounding Republican senators to reject their party's harsh proposal.

The bill also targets a key voting bloc: women. The bill targets Planned Parenthood for defunding and ratchets up the GOP's "war on women." Republican senators are already facing resistance from women for backing the Trump agenda, and the health care bill is furthering amplifying those tensions and the GOP's role in making women's lives harder.

And if they aren’t holding town halls, Republicans won't have to explain to constituents why they are backing a cut that will impact 1.4 million senior citizens living in nursing homes, who rely on Medicaid. The repeal plan would force states to tighten the eligibility requirements for care, squeezing vulnerable elderly Americans out of their homes.

Alongside those cuts to vital care for low-income Americans, the bill hands out $500 billion in tax cuts to the rich. That tax cut would be enacted at the same time at least 22 million are thrown out of their health insurance plans.

Republicans are doing all they can to avoid having to stand up in front of the people and explain and defend what they are supporting. In addition to the immorality and fundamental inhumanity of the bill and its provisions, it's simple bad politics to defend a bill that it is so out of touch with American values.

So instead, Republicans plan to duck and hide, and are surely hoping that the bill doesn't drag their individual political fortunes down into the muck.