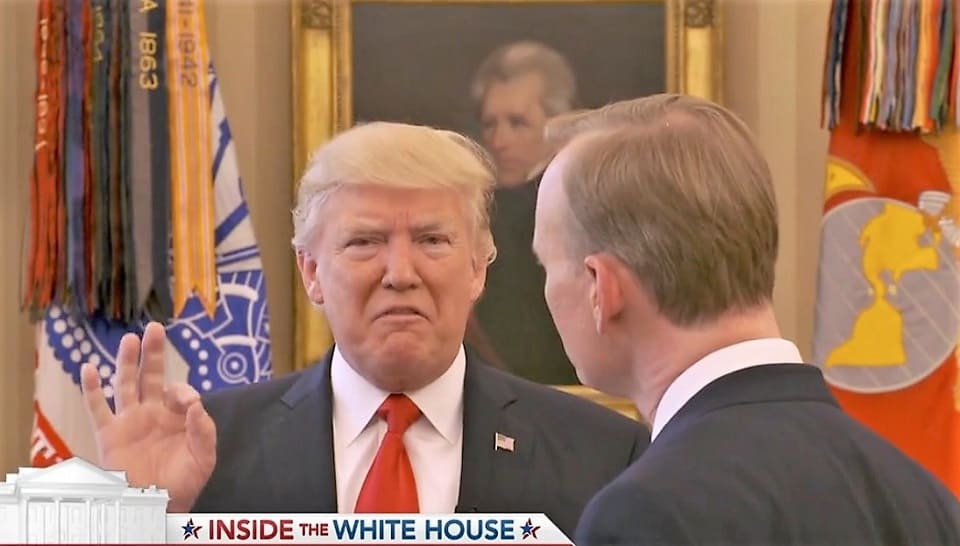 Donald Trump again repeated the debunked claim that president Obama wiretapped Trump Tower during the election, but he abruptly ended his interview with CBS News' John Dickerson when he was asked to defend his lie.

The White House has spent months trying to backstop Donald Trump's baseless claim that President Obama wiretapped Trump Tower, including a ham-fisted plot to obstruct the House Intelligence Committee's investigation that led the committee's chairman to recuse himself.

In an exclusive Oval Office interview with CBS News' John Dickerson, Trump brought the issue up again, only to abruptly end the interview when Dickerson pressed him.

Dickerson asked Trump about his contacts with President Obama during the transition, which led Trump to blame Obama's imaginary surveillance for the souring of their relationship. But Trump grew uncomfortable when Dickerson zeroed in on Trump's character attacks on Obama:

DICKERSON: Did President Obama give you advice that was helpful?

TRUMP: Well, you saw what happened with surveillance, and I think that was inappropriate.

DICKERSON: What does that mean?

TRUMP: You can figure that out yourself.

DICKERSON: The reason I ask is you called him "sick" and "bad."

TRUMP: Look, you can figure it out yourself. He was very nice to me with words, but, and when I was with him, but after that there has been no relationship.

DICKERSON: But you stand by that claim about him?

TRUMP: I don't stand by anything. I just, you can take it the way you want. I think our side has been proven very strongly, and everybody is talking about it. And, frankly, it should be discussed. I think that is a very big surveillance of our citizens. I think it's a very big topic, and it's a topic that should be number one, and we should find out what the hell is going on.

DICKERSON: I just wanted to find out. You're the president of the United States. You said he was sick and bad because he tapped your—

TRUMP: You can take it any way you want.

DICKERSON: But I'm asking you, you don't want it to be fake news, I want to hear it from President Trump.

DICKERSON: I want to know your opinion. You're the president of the United States.

TRUMP: That's enough. Thank you. Thank you very much.

The clip is being played for maximum drama, as evidenced by the fact that CBS held onto it until Monday morning rather than broadcast it on Sunday's Face the Nation, but they appear to have missed the significance of the exchange.

Trump's feud with Obama is political poison, and his flight from this interview appears to show that he knows it, but Trump cannot let go of his obsession with trying to turn this lie into truth. Trump killed this interview over a subject that he brought up himself because the facts of what he actually said cut through the cloud of nonsense that he wants Americans to "figure out" for themselves.

Multiple reports and investigations have revealed that Trump's claim of wiretapping is completely unfounded, but as with so many Trump lies, he refuses to let the truth get in the way of his absurd claims and baseless narratives.