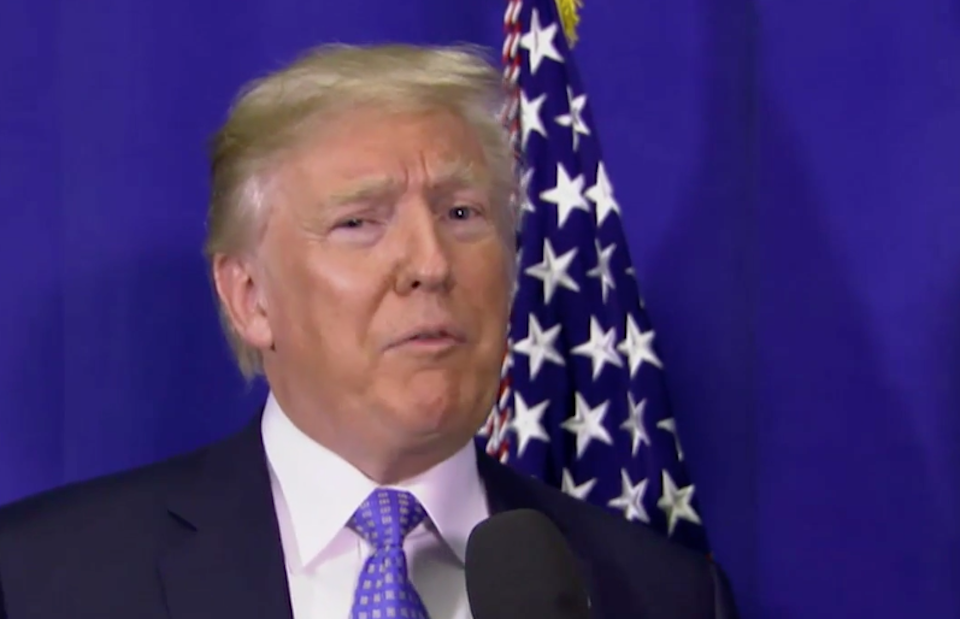 Trump's now going after Deputy Attorney General Rod Rosenstein — the man who has the authority to fire the special counsel but shows no indication that he plans to do so.

As speculation increases that Donald Trump will take the daring and desperate step of firing special counsel Robert Mueller to shut down the Russia investigation, perhaps the better question is, will Trump sack Deputy Attorney General Rod Rosenstein, who effectively controls the future of Mueller's probe?

To that end, word is leaking out that Trump is bad-mouthing Rosenstein to colleagues and denouncing him as a threat.

Trump has "complained that Rosenstein has shown insufficient accountability on the special counsel’s work," the Washington Post reports. "A senior official said Trump mocked Rosenstein’s recent testimony on Capitol Hill, saying he looked weak and unable to answer questions." Trump has even claimed Rosenstein is a "threat to his presidency."

Perhaps most absurdly, Trump has attacked Rosenstein as a Democrat. But Rosenstein, like Mueller, is a Republican. And so is former FBI Director James Comey. Yet all three men are increasingly being depicted by Republicans and Fox News as the three key players is a sprawling, and partisan, anti-Trump campaign.

That's how far flung the right-wing crusade now stretches: It's smearing life-long Republicans as part of the Trump problem.

Why is Rosenstein so important, and why is Trump now grousing about him and making veiled threats about implementing "changes in the Justice Department’s leadership," according to the Post?

Rosenstein remains central to the investigation into possible collusion between Trump and Russian operatives because Trump's attorney general, Jeff Sessions, recused himself from having any connection or oversight of the probe.

That task now falls to Rosenstein, who has said he is satisfied with the investigation. And it was Rosenstein who pushed back on Republicans last week during the House Judiciary Committee hearing, as they relentlessly attacked Mueller's investigation as being tainted, unfair, and out of control.

Rosenstein insisted he saw no reason to take any action against Mueller. Instead, the Republican special counsel has Rosenstein's full confidence. He praised Mueller as being "ideal" for the investigation.

If the White House does get desperate enough and decides to move against Mueller, the way the White House desperately moved to fire Comey last May, Trump would have to demand that Rosenstein take up the task of firing the special prosecutor.

Mueller can only be removed from his role if Rosenstein found “good cause." If he did not find good cause, Trump would have to fire him and likely others inside the Department of Justice leadership until he found someone willing to complete the White House's command to get rid of Mueller.

In other words, it would be another stunning Saturday Night Massacre scenario from the Richard Nixon era, when the crooked Republican president had to go down the chain of command at the Department of Justice before he could find someone willing to fire Watergate prosecutor, Archibald Cox. (Judge Robert Bork finally agreed to do the dirty work.)

It's fitting that Trump's possible blueprint looks so much like Nixon's.