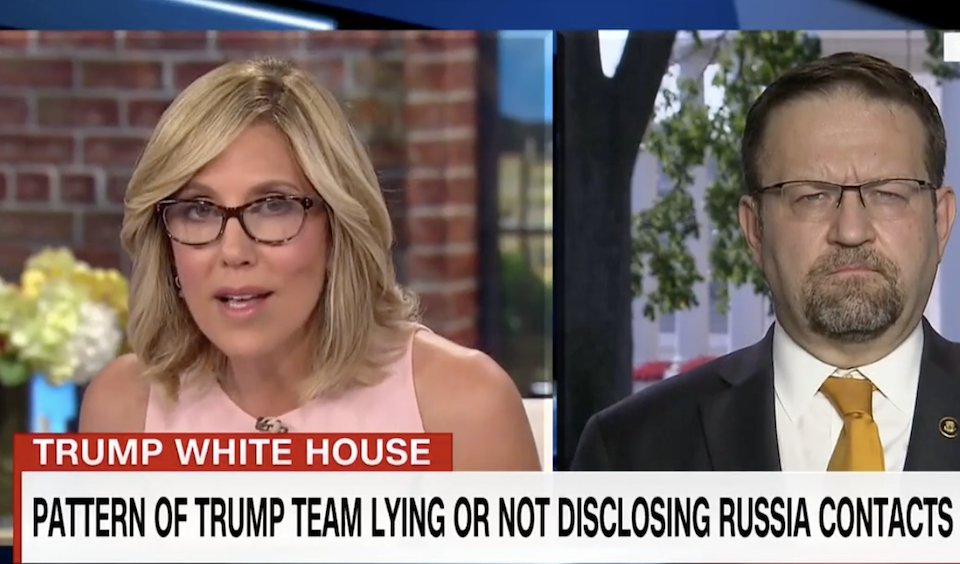 The White House can't keep its story straight on why Donald Trump Jr. held a secret meeting with a Kremlin-linked attorney to get dirt on Hillary Clinton.

In just a few days, the story has evolved dramatically, with Trump Jr. offering several versions of the meeting, and various members of the administration also pushing differing and conflicting stories.

During an interview with  CNN's Alisyn Camerota, Sebastian Gorka — the Nazi sympathizer in the White House who has the personal protection of Donald Trump and his top strategist, white supremacist Steve Bannon — offered yet a new excuse for why the clandestine meeting is a nothing story the media should not even be covering.

Despite the fact that Trump Jr. was an official member of his father's presidential campaign, and that his meeting to seek opposition research from a foreign entity is outrageous and unusual — several veteran campaign experts have said as much — Gorka said there is nothing to it because Trump Jr. is not "even a member of the administration."

CAMEROTA: The question is that why then, if this was all on the up and up, did the president's son Donald Jr. not disclose — not only not disclose it, but didn't actually use the right story when first asked about it, saying that the meeting was about adoption but that wasn't what the real story was. And he's not alone. I mean, let's pull up this graphic for you of seven people related to the Trump campaign somehow — Michael Flynn, Jeff Sessions, Jared Kushner, Paul Manafort, Don Jr., Carter Page, J.D. Gordon — none of them adequately disclosed the meetings with Russians until the press found out about it. What's going on?

GORKA: Nothing. You heard their statements. You heard Don Jr.'s statements that told you everything you need to know. He's not even a member of the administration.

The White House is clearly in a state of panic as it tries to spin this latest devastating revelation. As Camerota pointed out, more than half a dozen people associated with Trump's campaign — some of whom then went on to join his administration – held secret meetings with various high-level Russians, and every single one of them failed to disclose their meetings or even outright lied about it.

No matter how much the White House wants to make the mounting evidence of collusion go away, the story is only getting worse for the Trump team.